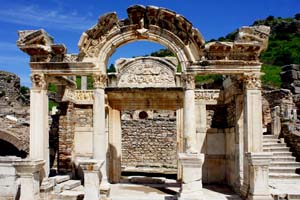 What does Greek and Roman culture mean to us? The answers are here

Architectural historian Henry Matthews has written a comprehensive account of the Greco-Roman cities of the Aegean coast of Turkey that permits general readers to broaden and deepen their understanding of the classical world.

Although some readers will have a general familiarity with cities such as Pergamon, Ephesus, and Halikarnassos, the text also details the beauty and importance of sites that fewer people know about, but are equally rich in history and architectural remains. Matthews not only travelled repeatedly to all the sites, but also took the photographs that make the book not only a scholarly but a visual treasure. The author of the Mosques of Istanbul (2010), he is deeply versed in the culture of the region from both a Western classical and eastern perspective.

This is a guide in the very best sense: the visitor to these sites will come not simply as a tourist, but someone prepared to understand how the architecture relates to place and time. As Matthews writes in his author’s note: ‘My goal is to clarify the complex political and social history of the region and bring the architecture to life in as much detail as the reader can absorb while visiting’. The book is judiciously edited so that the reader is not overwhelmed by the wealth of information contained in the descriptions of the 21 cities along the Aegean coast and in nearby river valleys.

The Introduction asks what may seem to be an obvious question, but is pertinent to our instagram culture: ‘What does Greek and Roman Culture mean to us?’ When one finishes the book, the answer has become clear; the architectural history Matthews relates not only details the scope of Greco-Roman civilization from the Prehistoric era to the Christian world, but provides the context for that of western Europe and America as well. His numerous examples make this clear. For instance, in his chapters on Priene and Halikarnassos, Matthews discusses the work and writing of the Greek architect Pytheos, who was unknown to me, despite my art historical credentials. Matthews cites his influence on the Roman architect and theorist Vitruvius, whose Ten Books on Architecture was an important source in turn for the Italian Renaissance and continued on through 19th-century neoclassicism.

Such examples support Matthews’ argument that our knowledge of Greek and Roman civilization is incomplete without including what is now Turkey. That history is very complicated, but Matthews carefully guides the reader through a complex maze of historical events, mythology and successive archeological excavations via clear organization and vivid writing. The Introduction summarizes classical history from the Bronze Age to the Byzantine Empire, explicating the Aeolian and Ionian colonizations, as well as the major events and figures of each era.

The reader can return to these helpful summaries or to the indispensible chronology and migration map in the folded endpaper when learning about the individual cities.  The Introduction also includes a summary of architectural principles and styles, which is helpful not only as a reminder of terminology but also as an explanation of the social function of various building types. Again, the helpful definitions in glossary reinforce the information in this section.

The latter is important even if one has no immediate travel plans, as the maps, supplied by archeologists and specially drawn, are augmented with suggested routes through the sites. Both make concrete the historical information provided and help root the images to the specific settings of the sites, so that even those readers never able to travel there will feel they have walked through these ancient cities.

In every city, history and myth are intertwined, and one of the strengths of this text is that Matthews does not oppose the two, but while conceding that much of what we would want to know may either be shrouded in myth or simply lost, in fact current research has tended to confirm mythological narratives.

Miletus is an example that will stand for the other 20 cities. The first city in Anatolia to be colonized by the Greeks about 1700 BCE, Miletus was said by legend to have been founded by a Minoan who fell out with King Minos. This founding myth has been disputed, but in the 1990s, Matthews writes: ‘German archeologists Barbara and Wolf-Dietrich Niemeier…found conclusive evidence of occupation by Cretans’. Among their findings were walls built in a Minoan technique, pottery and kilns of a Minoan type and some examples of Linear A writing. In reading, I  participated in the thrill of similar discoveries throughout this text, even as I must grieve all that has been lost to invasion and destruction.

A second Milesian colonization occurred in the archaic period, this time most probably from Athens. Miletus in turn colonized cities throughout the region and became wealthy through trade. Among its valuable exports were textiles, and we are supplied with a delightful example of ‘purple cloth coloured with Tyrian purple dyes made from rotting mollusks’. By the 6th century BC Miletus was the ‘leading city in the Greek world,’ the birthplace of Greek philosophy and natural science. Although the city was completely destroyed by the Persian invasion led by Darius in 494/3BC, it was rebuilt on a grid made famous by the philosopher/architect Hippodamus, whom Aristotle named ‘the father of city planning’.

We then follow the fortunes of the city through the Roman and Byzantine periods, during which another prominent architect emerged: Isidorus of Miletus, who with Anthemius of Tralles designed Hagia Sophia in what is now Istanbul. A detailed description of the extensive ruins and sculptural remains follows, with a beautiful panoramic photograph mirroring the quite breathtaking scope of the history.

I hope that this very brief example provides some sense of the richness of this book. The reader learns not only about the cities’ histories but also the scholars and researchers who have contributed to our current knowledge. (The generous Matthews even manages to give some credit to Heinrich Schleimann’s generally disastrous excavations at Troy.) Between the drawings of archeological reconstructions and the photographs of the current sites, the past and present are negotiated to bring history to life.

More than a guidebook, this text is useful for anyone interested in the history of Western civilization and would be an appropriate supplement to art history courses. For those who wish to pursue this fascinating history further, Matthews has created a website adding additional reconstruction drawings and photographs, as well as links to archeological websites.

'The Peloponnese: A cradle of artistic heritage’, Cassone August 2013