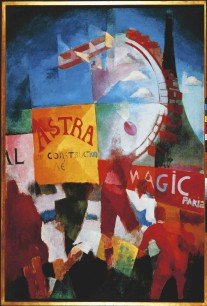 Has Robert Delaunay’s work been wrongly overshadowed by his wife’s?

Resisting Abstraction: Robert Delaunay and Vision in the Face of Modernism by Gordon Hughes

Has the importance of Robert Delaunay (1885–1941) in the pioneering period of avant-garde painting in Europe been undervalued in recent years?  This is the question that propels Gordon Hughes in his detailed investigation into the origins, the immediate historical circumstances and the subsequent reception of the circular painting, entitled First Disk, painted in 1913.  He opens with a rather melancholy note of its location in a private collection, photographed in a frankly domestic New York interior in 1984 – an image wittily endorsed by the artist Louise Lawler in a photograph showing a television broadcast of Stevie Wonder playing in front of the canvas.

Back in the days of that work’s inception, Guillaume Apollinaire (1880–1918), the poet and critic, had designated Delaunay’s approaches to painting as constituting a particular and significant development of Cubism, which he termed, ’Orphism’, being concerned with the special qualities of light and colour.  Subsequent attempts by American art historians to systematize the course of art in the 20th century in the form of a flow chart of progression, however, failed to identify any line of direct influence beyond Orphism.  Hughes’ suggestion that this did not occur until the circle paintings of Kenneth Noland and Frank Stella hardly seems  germane.

By 1912, Delaunay had become widely celebrated in Germany and Russia, as well as France, for such impressive exploitations of the language of Cubism as the four-metre long The City of Paris, which convincingly synthesized the contending elements of modern painting to produce a substantial subject picture, described at the time as ’symphonic’.  The underlying direction of Resisting Abstraction  follows a discussion of the extent to which Delaunay seeks and achieves a mode of Abstraction or ‘Pure’ painting during this period of avant-garde experimentation, but at the same time, how much he remains attached to the idea of referencing the modern spirit of the world around him.

This spirit of modernity is evidenced by a selection of precise symbols, starting with the Eiffel Tower – still relatively recent in itself but now having acquired the function of a radio mast – and a giant Ferris Wheel (La Grande Roue), which for a time dominated the Paris skyline.  The street scene was changing, with larger and more clashingly colourful posters and the newly installed electric lighting on the boulevards creating novel experiences of vibrantly blurring colours for the pedestrian amidst the bustling crowds.

Paris was also experiencing an enthusiasm for energetic, even violent sports such as boxing and rugby football. Much of this dynamic experience is amalgamated in the ‘Cardiff Team’  series (though it turns out that the leaping figure, derived from a press photograph, had nothing to do with that particular team).  Added to all this, the visual experience of the day was becoming increasingly attuned to the effects of the aerial views of the city taken by cameras operated from dirigibles and unmanned kites. It was, of course, also the pioneering era of flight, and swerving biplanes frequent many of Delaunay’s celebratory paintings of modern life.

The reality has to be acknowledged that even when the paintings at first appear to be organized into regularly structured abstract compositions, such as the ‘Window’  series, the secondary emergence of hints of outside structures such as the Eiffel Tower, or of framing curtains or even a reflected face remains fundamental to the artist’s intentions. This is not to deny that in The First Disk he was aiming to exclusively engage the eye of the viewer in a powerful effect of pulse and movement, through the operation of the phenomenon of simultaneous contrast of colours. Nonetheless, Hughes’ argument falls short of convincing the reader that the search for ’Pure’ abstraction  was Delaunay’s single and all-consuming motivation.

This is an engaging and enthusiastically written study, constantly roping in intriguing contextual details on the way, such as a scandalous murder case that dominated the debates of the day – debates coloured by the psychological theories of Henri Bergson.  It is richly and informatively illustrated and does much to revivify an interest in an artist whose historical recognition is currently perhaps becoming overshadowed by that of his artist and designer wife, Sonia.