On Kawara and the expanded book 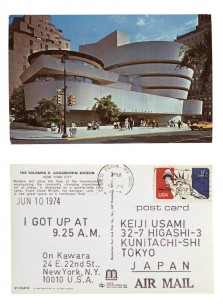 Red or blue or black. Dimensions: 10 x 13 x 1.5 inches.  Centred sans serif text on the front. No, not a painting by the Japanese artist On Kawara but the Guggenheim exhibition catalogue. This is somewhat ironic given the short shrift that Kawara’s involvement with the artist’s book receives in this exhibition.

Curators Jeffrey Weiss and Anne Wheeler place Kawara (1932–2014) in a general conceptual art context but exaggerate his outlier status and emphasize an almost craft painterly practice. Lucy Lippard in her study of ‘the dematerialization of the art object’, Six Years… (1973),  recognized Kawara as ‘one of the most important, and one of the most elusive and isolated, artists working in this general direction’ – meaning ‘so-called conceptual or information or idea art’.

The protocols that govern his ‘Today’ series – of which there are over 150 in this exhibition – come straight out of US artist Sol LeWitt’s ‘Sentences’ or ‘Paragraphs’ on conceptual art. If a painting, which took 6 to 7 hours depending on the size, was not finished by midnight it was destroyed, but more could be made on a day – two or even three (e.g. MAR.18.1970). Four to five coats, each sanded down, of Liquitex paint cover the front and sides of the canvas, resulting in a matte finish. A sort of time-lapse montage of 20 photographs on page 210 of the catalogue shows the process for Date Painting 5. SEPT.1994. There are eight predetermined sizes from 8 by 10 to 61 by 89 inches: there is no apparent correlation of the events of the day with the size, although those of 16, 20 and 21 July 1969, during the Moon Landing, are much larger than average.

The paint is hand-mixed, so that colours vary. The choice of colour seems to be random and the palette has changed over time: early in the sequence red and cerulean blue were used more often, whilst later brown-greys and blue-blacks predominate. Hand-drawn (not stencilled) text in Futura (earlier than Gill Sans)  is centred on the canvas. There is some variation in the abbreviation of the month – it is usually just three words with a full stop but there is JANUARY 30, 1966 and JULY17, 1971. Likewise the number of the day is normally in between the month and year but there are examples where the number comes first:  25 JULY.68 (also a rare example of the year being abbreviated).

Each painting is housed in a simple homemade box lined with (usually) an extract from a newspaper from the location where Kawara was on that date – so primarily the New York Times. The cutting may be from the front page, sports page, stock prices, obituaries, or advertisements etc. but there is no direct correlation with the Date painting. Kawara sometimes displayed paintings with or without their boxes and when he did they were sometimes below the painting or in a vitrine at the side.

Another photograph in the catalogue shows the interior of Kawara’s Greene Street, New York, studio presumably on JUNE.28.1979, the Date Painting propped up like a book, newspaper/s at the upper left next to a logbook. A map of Manhattan, part of the I Went project (1968–79), is to the left of the painting with a rubber stamp and letters. And all on an office or school desk with a reading light. This is far from a typical painter’s studio and shows the imbrication of all of Kawara’s projects.

The Date Paintings are viewable as an expanded book: they connote the annals of the mediaeval monk; they question the relationship of text and image (and which is which). Each Date Painting is recorded in the ‘Journals’ (1966–2013), 48 annual volumes in leather-bound loose-leaf binders with plastic sleeves, with a swatch of paint used and glued onto a colour chart. It also records the newspaper ‘headline’. They are also notated on a One Hundred Years Calendar where a green dot signifies a completed Date Painting and a red dot that more than one was completed that day.

There are more obvious expanded books. ‘I Read’ (1966–95) is a unique 18-volume set of clothbound office-supply loose-leaf binders with a newspaper cutting for each day he created a Date Painting, occasionally with a comment (some personal) which sometimes becomes a subtitle: ‘USA began to bomb North Vietnam again’. ‘I Met’ (1968–79), begun on the same day as the ‘I Got Up’ series, comprises 24 clothbound loose-leaf binders listing everyone to whom Kawara spoke each day. When his rubber-stamp kit was stolen in a Stockholm bank, Kawara ended this series.

‘I AM STILL ALIVE’(1970–2000) is in the tradition of ‘mail art’ or the ‘Telephone Paintings’ of Hungarian painter and photographer, Laszlo Moholy-Nagy (1895–1946). This series began as three differently worded 1969 telegrams to the curator of ‘18 Paris IV 1970’, Michel Claura, and modulated into ‘I AM STILL ALIVE’ in a telegram to the atypical collectors, Herbert and Dorothy Vogel on January 20 1970. Kawara liked the impersonality of the telegram: a clerk took down the final version of the transmission, and format, colour, material, stamping etc. were dependent on the system or company used at the destination. The series up to 1978 became an artist’s book, published by René Block, Berlin, and not on exhibit in this show.

‘I Got Up’(1968–79) began as a gesture of thanks to German curator Kasper König, who had supported Kawara’s trip to Mexico in 1968-9. The format was a rubber stamped I GOT UP AT… with the time on the back of a horizontal touristy postcard: Kawara played games sending the same postcard to the same recipient or of the same monument from different angles to different recipients. We are here with the world of the book – the play of recto and verso that cannot be shown on the studio or gallery wall. The Guggenheim shows both sides on transparent walls. We are definitely in expanded book territory now, emphasized by the public programme of readings from Kawara’s ‘One Million Years’, 24 sets of leatherbound post binders of annual dates stretching one million years Past (1970–1) and one million years forward Future (1980–98).

This is autobiography as art or art as autobiography (or both and neither): the ‘I’ conjures up St Augustine,  the philosopher Jean-Jacques Rousseau and novelist Walter Abish, but we are left with Lucy Lippard’s ‘elusive and isolated’ Conceptual artist: we know more about his life than perhaps anyone who has ever lived, and yet we know nothing. It is a wonderful show and should not be missed: in the five years I have been in New York it is the best contemporary show I have seen. Kawara would be wryly amused by the word ‘contemporary’.