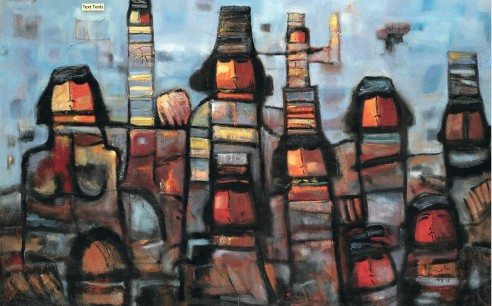 Middle Eastern art reflects the cultural complexities of the region: Saeb Eigner’s book will be welcomed by those seeking an introduction to this diverse work

Art of the Middle East: Modern and Contemporary Art of the Arab World and Iran by Saeb Eigner

Forgive me for sounding melodramatic but, if ever there were a crucial time for this book, it is now. Now, when Western European and American images from the Middle East almost exclusively depict a region at war with itself and, as mainstream media maintain, with ‘us’. Not that Art of the Middle East ignores conflict: it could not and does not. But it places conflict within a broad cultural context of everyday life in cultures that are rooted in the southern and eastern  Mediterranean. War and terror become strands in a much larger and more complexly textured tapestry that also reflects urban and rural life, family traditions, artistic innovations, and expressions of spirituality.

Author Saeb Eigner makes no bones about this being a formal reference text. But his non-academic approach to representing diversity (even as he allows for formation of some generalities) will be welcomed by those seeking an introduction to the region’s cultural production. At the same time, for readers who have enjoyed fuller exposure and experience, it will recall familiar names and images as well as introducing new artists and bodies of work. All in all, Art of the Middle East is a solid contribution to potentially greater inter-cultural understanding.

The book’s pages are replete with colour illustrations and short biographies of more than 200 artists, an index, felicitous poetic excerpts that are printed in both English and Arabic, and a brief foreword from architect Zaha Hadid. But what distinguishes the publication is Eigner’s well-informed writing, which comes in the form of a foreword, acknowledgements, introduction, chapter summaries, and entries on each work of art, be it a film still, a piece of sculpture, or a painting.

Eigner clearly outlines his intent to provide a broad representation of art works – their history, geography and artistic style – made by individuals of Arab, Iranian and Maghrebi descent. In addition to promoting greater understanding, however, Eigner also shares his passion for art across the geographical and historical spectrum. A business specialist based in London, Eigner is a well-known advocate for arts education. He also served as senior adviser to the British Museum’s landmark exhibition ‘Word into Art; Artists of the Modern Middle East’ (2006), highlighting many of the works shown there in the present book.

The book’s seven chapters cover ‘Sacred Scripture’, ‘Literature’, ‘Music and Performance’, ‘Politics, Conflict and War’, ‘History and Identity’, ‘Portraiture and the Body’, and ‘Nature and the Land’. Within these themes, Eigner identifies important artists and historic art movements in Algeria, Egypt, Iraq, Iran, Jordan, Lebanon, Morocco, Palestine, Saudi Arabia, Syria, and Tunisia. He explores the ways in which Western trends have interacted with regional traditions to create work that sometimes looks very similar to Cubism, Pop art and other Western styles, but often clearly reflects other cultural dynamics. Implicit is the extent to which modern and contemporary European and American art has been inspired by Middle Eastern visual practice.

The artists Eigner singles out as foundational include the Iraqis Jawad Selim* and Shakar Hassan al-Said, both deceased, and Dia al-Azzawi, who lives in London and has done significant work as an artist and a patron. Other pioneering artists of international renown are Saloua Raouda Choucair and Aref Rayess of Lebanon; Parviz Tanavoli of Iran; the Egyptian, Hamed Owais; and the Algerian artist known as Baya. Although artists of the present day often are recognized as cosmopolitan, Eigner indicates that Middle Eastern artists of the early and mid-20th century were arguably more international in their outlook and experiences than many of their Western European and American counterparts.

But perhaps Eigner’s greatest service is in the attention he gives to some of the hundreds of artists who do not sit at the tip of the iceberg, but comprise its bulk. Many of them have emigrated, many others live and work in their home countries. They all, however, reflect cultural complexities that call out to be appreciated amidst prevailing stereotypes of violence and exoticism.

Art of the Middle East