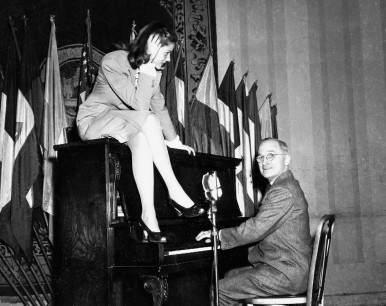 ‘Contrived, controlled and certainly not candid’, shots of the film stars from Hollywood’s ‘golden age’ can still be very revealing

The publicity departments of Hollywood film studios such as Columbia, Paramount, MGM, Universal, Warner Brothers and RKO created thousands of promotional images each year to satisfy the wishes of film fans.  They can be categorized loosely as formal portraits, action stills from films and candid shots of the stars.  This book highlights the latter category, film stars relaxing at leisure in seemingly candid photographs that were actually highly staged and controlled by the studios.  Hollywood Unseen features over 40 years of these publicity photographs drawn from the wonderful archives of the John Kobal Foundation.

John Kobal was born Ivan Kobaly and had a short, unsuccessful film career before developing a very successful one as a film historian and author.  He collected film magazines, cinema lobby cards, photographs and very importantly their negatives.  During the 1960s and ’70s the material was considered of little value and the archives of film studios were regularly destroyed as the latter went out of business or were taken over.  This publication draws on the Kobal collection of over 200,000 photographs, supplemented with additional images from Getty Images.

Actors and actresses were signed on exclusive contracts by the major Hollywood film studios of the 1920s to 1950s.  These contracts controlled almost all aspects of a stars career and ran for between five to seven years with options to either drop them or to extend.  They were obliged to star in up to eight films per year and partake in related publicity.  Many film stars enthusiastically enjoyed publicity and public relations, others were less keen.

Formal portraits were produced for fan magazines such as Photoplay or Screen, they were also sent out to fans in response to letters posted to the stars.  Rather than taken from the film stock itself, stills from the scenes of films were taken at speed after a ‘take’.  In the 1920s and 30s bulky 4x5 inch sheet film cameras were being used to take these stills.  During this ‘Golden age of Hollywood’, as now, the media clamoured for more and more images.

Hollywood Unseenconcentrates on the supposedly candid, at home, photographs of films stars doing something other than acting or posing for a portrait.  Photographs were produced of stars at home, on holiday, celebrating Christmas or Thanksgiving, playing with their children or pets, swimming or exercising. They are often contrived, controlled with carefully selected props, supported by hair and make-up staff and submitted to the film studio’s publicity departments for approval.

Surprisingly for the profession, some actors such as Gary Cooper or Spencer Tracey disliked having their photograph taken.  Pictured within this book, Peter Fonda and James Stewart look ill at ease posing together playing table tennis.  Indirect sexism can be observed with women regularly portrayed applying make-up and men swimming or working out on gym equipment.

Photographs of stars such as Johnny Weissmuller and James Cagney in various action poses also feature in this publication. Bing Crosby looks uneasy photographed on a rowing machine with Paramount Studio’s fitness trainer in 1934.   Fred Astaire poses awkwardly by a pool, dressed in a jumper and trousers in a supposedly candid shot for RKO pictures in 1935.  Both stars look much more relaxed and at ease being photographed practising dance routines together in 1946.

More contrived, controlled and certainly not candid photographs show Ava Gardner posing in a swimsuit on a beach, with skis.  Joan Blondell posed in a swimsuit on a diving board, but wearing her high-heeled shoes.  Arlene Dahl poses in a chef’s hat and little else while supposedly cooking a Thanksgiving Turkey in 1949.

Nonetheless, film studios also approved genuine photographs of stars lives and this publication has some beautiful examples of actors and actresses at leisure, on holiday or with their children.  Carole Lombard, Claudette Colbert, Errol Flynn, Cary Grant and Marlene Dietrich (looking uncharacteristically casual in shorts and ankle socks) are photographed enjoying a day out together at Venice Beach amusement pier.  Mickey Rooney and his first wife Ava Gardner look as if they are genuinely enjoying practising golf swings together in 1942, although they were to divorce soon after.  Another golf themed photograph shows Jean Harlow posing by herself with a full bag of clubs in which she looks simply beautiful.

Some of the most genuine photographs chosen for this book depict film stars with their children. Bing Crosby catches a train with his son Lindsay. Robert Mitchum was photographed sitting in his car with his daughter Trini.  The book also includes a lovely photograph of Buster Keaton with his sons Robert and James playing together.

Perhaps the most poignant photograph is one showing Joan Crawford meeting a very young Judy Garland on the set of For Me and My Gal in 1942.  After eighteen years Crawford was about to be dropped by the studio.  It is either sincerity or Crawford’s best acting skills on show, as she seems genuinely pleased to meet the younger star.  The studio would drop Garland herself just eight years later.

Despite the fact that these supposedly candid publicity photographs remained staged and strictly controlled by the film studios, they look so much better than the paparazzi photographs that followed in the 1960s and 70s; and so much more professional than the celebrity selfies we see today.  The work of long forgotten film-studio portrait photographers such as Clarence Bull, Don Gillum, George Hurrell, Jerome Zerbe and Ruth Harriet Louise are reproduced beautifully within this book.  Photographs are not grouped together by theme or chronology.  Its random presentation allows the reader to flick through, make their own assumptions, and to draw their own conclusions.  It surely cries out for a sequel.