The boy who bit Picasso 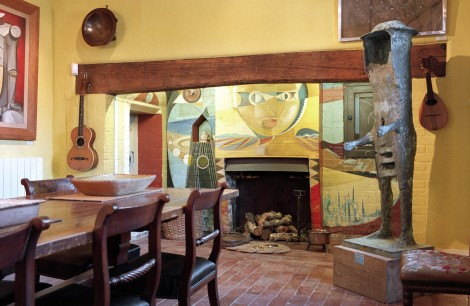 A gem from the archive: in 2011 Sue Ward interviewed Antony Penrose, son of Roland Penrose and Lee Miller.

There are some perks to living on the Norfolk/Suffolk border, and sitting on the sea wall at Aldeburgh talking to Antony Penrose in the afternoon sunshine has to be one of them. We had started out sitting at a table but had progressed to the sea wall next to the lifeboat station to get away from continuous interruptions. We did not fare much better here as the lifeboat was called out, and the police had to guide other motorists around the crew’s discarded cars, resulting in more noise! For our visitor from Sussex it was all added local colour. The son of Roland Penrose and Lee Miller, and founder of the Lee Miller Archive, Antony was in Aldeburgh as the guest of Aldeburgh Art, a festival started this year by Caroline Wiseman.

Antony had come to Aldeburgh to talk about his new children’s book The Boy Who Bit Picasso. Tony wrote this for his grandchildren, and his daughters urged him to publish it. He got the idea from a book written by the photographer David Douglas Duncan, all about the dachshund that he had given Picasso, Lump the Dog who Ate a Picasso. Picasso realized that the dog Lump, whom he adored, had never seen a rabbit, so he made him one out of a cardboard cake box, and Lump ate it.

I asked how he came to bite the famous man.

‘Picasso and I had a game we called bull fights – it was way before I knew how barbaric bull fighting is – I was the bull and I used to charge at him but he always jumped out of the way. I go so frustrated I grabbed him and bit him. He bit me back’. Lee noted that in the little hush that followed Picasso said ‘Tiens, that’s the first Englishman I ever bit’.

The book, which he wrote on a whim, he then ‘sent off to Thames and Hudson on the outside chance they would like it. They did and then proceeded to do an amazing job on the design and layout. The team was fabulous and my editor Jenny Wilson was wonderful and we had a brilliant designer in Sarah Praill. It was her idea to use drawings by children’.

Picasso, a family friend to Antony’s parents, the Surrealist painter Roland Penrose, and his wife, the photographer Lee Miller, was not the only prominent artist to visit Antony’s childhood home. Roland, biographer of Picasso, numbered amongst his friends the artists Max Ernst, Joan Miró, Man Ray and Antoni Tapiés, and the poet Paul Éluard. Lee, an American, had been the top model for Vogue; a beautiful supermodel of her day, and muse and lover of Man Ray before going to the other side of the lens and becoming an exceptionally talented photographer. Although she and Roland were together from 1939, she did not marry him until after the Second World War. During the war she was an official war photographer for the US army. She was one of the first people into four concentration camps, taking photographs in Buchenwald and Dachau.

Roland and Lee’s son Antony was born in 1947. They moved to Farley Farm at Chiddingly in Sussex in 1949, and it was here that many of the Surrealists came to stay. This Sussex farmhouse occupies a unique position as a meeting place for some of the key personalities in 20th-century art. For 35 years, artists, poets, painters, writers, curators and gallery owners from all over Europe visited here.  In fact, in the 1950s if any people with strange accents landed off the ferry at Newhaven they were taken straight to Farley Farm.

To the young Antony these people were just friends of his parents: ‘They seemed just like ordinary people: it took me many years to realize that most people didn’t behave like they did’. Picasso was the young boy’s hero. ‘For a small boy he was magnetic. I can remember he was very good on hugs, he was much more huggy than anyone else I had ever known. I remember his smell – Gauloise and very strong soap, or maybe it was cologne, an unusual smell to me’.

Young Antony became very good friends with Picasso’s children, Claude and Paloma.  Their mother was Francoise Gilot, remembered by Antony for giving him chocolate biscuits. When he sent one of his toys, a model of a London bus, to Claude as a gift, Claude sent back a present for him. This was Mrs Noah, a small wooden carving made by Picasso for his Noah’s ark. It was played with it for many years, and Antony says his daughters when small were most upset that Mrs Noah was not part of the set anymore, but now consigned for safety’s sake to a glass case.

There are so many mementos of the extraordinary visitors to this house. How many kitchens have a tile over the Aga, hand painted by Picasso? It is still there and still gets splashed by cooking fat. Farley Farm, which is open for tours, is full of personal treasures belonging to this special family and their gifted friends. (See Editor’s note).

Many of the major paintings collected by Roland Penrose are now in national collections, but the majority went to the Scottish National Gallery of Modern Art in Edinburgh. Antony sold them in order to develop the Lee Miller photographic archive. After his mother’s death 60,000 negatives from her work were found in the attic at Farley Farm.

Selling works from his father’s collection was a hard decision, but they really were too valuable and needed too much security and conservation to keep in the family home. Antony feels that as a result the works ‘have grown in stature and deserve to be seen by thousands’.

Meanwhile, works from the Lee Miller Archive are exhibited all over the world. In 2007 a major exhibition ‘The Art of Lee Miller’, curated by Mark Haworth Booth, was held at the V&A London. After record attendances in London it travelled to Philadelphia, San Francisco and then Paris. It was seen by half a million people.

Antony is very excited about an exhibition to be held this June at the Peabody Essex Museum, Salem Massachusetts, ‘Man Ray and Lee Miller’.This exhibition will concentrate on their artistic abilities, collaboration and love for each other. Another exhibition is currently in the Luxembourg Centre National d’Audiovisuel at Dudelange, exhibiting Lee Miller’s pictures taken in 1945 at the liberation of Luxembourg.

‘The archive is very busy. We have to cover the costs of curating, security and conservation, and look after the collection. To do this we have to generate a certain amount of income. We are there to conserve and disseminate the work of Lee Miller and Roland Penrose – that is our role’.

When I asked him if he was now doing more work on Roland Penrose he told me about two forthcoming retrospectives of Roland’s work, one in Southampton in February 2012, and the other in 2013 at the Towner Gallery, Eastbourne.

BUY The Boy WHo Bit Picasso from AMAZON

BUY The Home of the Surrealists by Antony Penrose

BUY The Lives of Lee Miller by Antony Penrose

Roland Penrose,  Picasso's biographer,  worked with Paul Nash, Henry Moore, Herbert Read and Humphrey Jennings, among others, to organize London’s International Surrealist Exhibition in 1936. He ran an art gallery in Cork Street, London, wrote a manual on camouflage for the Home Guard during the Second World War, and after the war he and Herbert Read co-founded the Institute of Contemporary Arts (ICA) in London.

Lee Miller was an American model who went to Paris in 1929, where she became Man Ray’s assistant, artistic collaborator and lover. Together they developed the photographic technique of solarization. She also worked as a fashion photographer but is now best known for her work as a war photographer during the Second World War. Miller photographed London in the Blitz, the liberation of Paris and that of four Nazi concentration camps. Vogue magazine, which had published her fashion photographs, also published the devastating scenes she photographed in the camps.

Paul Eluard was a Surrealist poet. During the war he was active in the French Resistance. Dominique was his third wife, his first being Gala, who left him for Salvador Dali, and the second Maria Benz (known as Nusch) a model, actress and artist who was also active in the Resistance. Wartime privations may have undermined her health: she died in 1946. He married Dominique in 1951

Join a guided tour and experience the extraordinary home, lives and art of Lee Miller, top Vogue model, Surrealist photographer and WWII correspondent, and Roland Penrose, artist, biographer and friend of Picasso, Ernst, Man Ray and Miró.  The works of these artists are displayed in the house.  Also take the time to visit the sculpture garden and Barn Gallery.  Open for tours (Season: April – October) on the 1st and 3rd Sundays 10a.m. – 3.30p.m.  Extended and Group Tours also available by calling Kate: 01825 872856 or visit www.farleyfarmhouse.co.uk <http://www.farleyfarmhouse.co.uk