The Sagrada Familia: ‘offspring of a long era’ 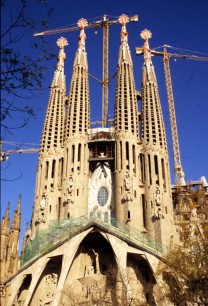 The word unfinished, in the title of this exciting exhibition, ‘Sagrada Familia Gaudi’s Unfinished Masterpiece: Geometry, Construction and Site’, belies the astonishing progress, made in the last four decades, towards the completion of Gaudi’s Cathedral of the Sagrada Familia (Holy Family) in Barcelona. A friend of mine who visited the site in the early 1970s described the building activity he saw as ‘one old man with a wheelbarrow gazing up at fragmentary walls and towers’.

When I first saw the structure myself in 2004, I rejoiced at the sight of tall cranes on the skyline, and a skeleton of tree-like columns branching out to support vaults soaring dynamically above the nave. I was able to ascend, as if by magic, in a slim elevator, to a high point in the cluster of sculpted towers burgeoning with organic ornaments, and gaze down on the emerging architecture far below. Today the interior is entirely enclosed; many symbolic and decorative details enliven the surfaces; above all, Gaudi’s daring vision appears to have been realized, as if he had been there personally all these years to direct the work. How could the team of architects, engineers and builders who continued the construction have achieved such a feat so long after Gaudi’s death?

The Catalan architect, a deeply religious man, conveyed his concepts for the cathedral in philosophical statements and inspiring sketches, but left few architectural drawings. He preferred to explore and communicate his designs in three dimensional models of gypsum plaster; he even worked out many of the details directly with craftsmen on the site.  During his last 12 years, devoting his time entirely to this project, he passed on his principles and beliefs to a group of young assistants who continued the work after he died in a streetcar accident in 1926. They understood Gaudi’s conviction that nature, as God’s creation, offered the key to the design of a house of God.

Although he had followed the French architect Viollet-le-Duc in his admiration for Gothic architecture, he believed that the creators of the mediaeval cathedrals, employing vertical piers and buttresses supporting pointed arches, had missed the lessons of organic forms, which do not follow straight lines. In plants and bones he observed catenary curves, helicoid shapes and hyperbolic paraboloids, not rectilinear geometry. In seeds, leaves, stems, shells and honeycombs he found inspiration for his creations.  He sought to resolve forces using the principle of the funicular, an equalizing of forces similar to the balance of ascending and descending trains on a mountain railway. A system of proportions, based on the golden mean or using dimensions in multiples of 12, guided his design

At the outbreak of the Spanish Civil War in 1936 work on the cathedral stopped and vandals destroyed most of the models that offered the key to its completion. When construction began again in 1939, Gaudi’s assistants, imbued with his philosophy, recreated models from photographs and published material as well as their own memories. Extraordinarily, he sanctioned them to contribute their own ideas, He wrote:

Great temples were not the work of just one architect. I know that the personal taste of the architects who succeed me will have an influence on the work, but I don’t mind: I think it will even to be to the benefit of the temple. A work like this should be the offspring of a long era, the longer the better.

What Gaudi could not have envisaged is that advanced computer programs would be able to explore and delineate his designs in three dimensions, in a previously inconceivable way. When experts, led by Mark Burry, at Victoria University’s Wellington School of Architecture in New Zealand, began investigating the application of computer graphics programs to the design process of the Sagrada Familia in1998, they discovered that conventional computer software for architectural design ‘could not resolve Gaudi’s geometrics’. They turned to aeronautical engineering software and succeeded in producing remarkably explicit representations of Gaudi’s structural elements.

The curator, George Ranelli, dean of the Bernard and Anne Spitzer School of Architecture, has studied Gaudi for many years; he is the author of the fine catalogue that accompanies the show. Fabian Llonch, who has led a group of students to Barcelona every summer for the last ten years, has also published extensively on Gaudi’s work. They vied with many other institutions to obtain the exhibit, which has previously only been shown in the Vatican Museum in Rome. Their long collaboration with the Sagrada Familia workshop made their school a natural venue for it.

Visitors to the Atrium Gallery at City College of New York (CUNY) are able to understand many facets of the Sagrada Familia. Moving through the lofty gallery they will learn about Gaudi’s life and beliefs, see the chronology of building and the evolution of the quarter of Barcelona where it stands, as well as the development of the entire city. They can absorb Gaudi’s design principles and methods.

One particularly fascinating item is a model consisting of strings suspended from a frame and weighted to simulate loads that would be applied to the structure. The curvature that the string assumes, predicts the ideal shape (seen upside down) of perfectly balanced arches for the nave and aisles.

Moving forward from the late 19th century to the 21st, the brilliant three-dimensional computer drawings show the transformation of the design process. The central area of the gallery holds the tour de force, the array of stunning plaster models produced by the cathedral workshop in Barcelona. They are surrounded by superb photographs of the completed architecture. They give hope that the Sagrada Familia will indeed open, as planned, in 2026, the centenary of Gaudi’s death. We can only surmise his response to the completed work, flowering in ground he prepared from potent seeds that he sowed.

‘Sagrada Familia Gaudi’s Unfinished Masterpiece: Geometry, Construction and Site’ is at the Bernard and Anne Spitzer School of Architecture, City College of New York, 160 Convent Avenue. Until 8 May  2015
The city of Barcelona contains a number of other buildings by Gaudi, some of which are open to the public, and the magnificent Park Guell, a must-see experience on a visit to the city. The work on the Sagrada Familia has been financed by public admissions fees to the building site.