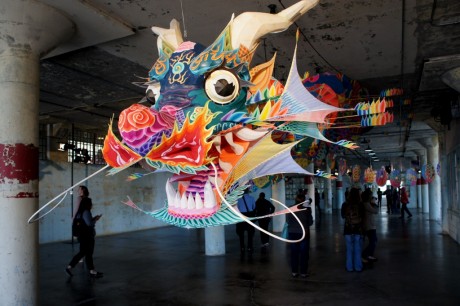 Susan Platt travelled to Alcatraz, once a prison island, where she found it turned into a beacon for freedom by a Chinese dissident

In 1995 I participated in the United Nations NGO conference on Women in China as a representative of the International Art Critics Association. I visited the ‘Beijing East Village’, an avant-garde artists’ community created in the early 1990s. I didn’t know that it had already been disbanded by the time I arrived, but there were a few traditional artists remaining, whom I visited with three friends. As soon as we stepped back outside we were detained, our passports taken, and we were interrogated for three hours in a nearby teashop. Once released, we were under surveillance for the rest of our time in China:  my hotel phone was tapped and I was followed. It was unnerving. On the last day, I stayed away from a celebration with a group of Chinese women artists because I feared my surveillance would extend to them after I left the country.  Although this was a brief experience, I still remember my intense anxiety and the feeling of relief as I got on the plane.

Internationally renowned artist Ai Weiwei was detained for almost three months in 2011, ostensibly for tax evasion, followed by house arrest, and today he is still under surveillance and can’t leave the country. He has, though, been able to continue to create work all over the world in absentia.

‘@Large, AiWeiwei at Alcatraz’, an extraordinary installation inside the former Federal prison on the island or Alcatraz, USA, expands on his personal experience to call attention to, and honour, political dissidents detained in countries all over the world. Placing ‘@Large’ on Alcatraz Island, now populated only by cormorants and gulls in the midst of the incredibly beautiful San Francisco Bay, amplifies the subject of unjust detention (as it exacerbated the suffering of the people detained here).

At the top of the Island, an oversized dragon kite, his mouth wide open, his long teeth threatening, immediately confronted us as we entered the ‘New Industries’ building, a vast space formerly used for prison labour. Made of dozens of kites hand-painted in China, the dragon confronts us, suspended from the ceiling, its body weaving back and forth through the columns of the enormous space. But it is trapped. It cannot escape. Historically a symbol of imperial power, this dragon expresses both rage and futility.

‘@ Large’ is a brilliant pun/title for this multi-part installation, created under a unique private–public partnership that includes the FOR-SITE Foundation led by Cheryl Haines, the National Park Service and the Golden Gate Conservancy.  Haines had the idea of an installation on Alcatraz, then happened to meet Ai Weiwei in China, just after the latter’s release in 2011. Ai Weiwei wanted to broadcast injustice inside and outside China: it was a perfect fit. But it took a lot of diplomacy to gain support: it is the first time any art event has been held at Alcatraz.

How better to first greet visitors than with a giant Chinese dragon kite!  Near the dragon are ‘bird kites’ that refer to countries holding political prisoners. These threatening, unmovable birds emphasize the contradiction of their ‘detention’ with the freedom of the many birds on Alcatraz Island, now designated as a bird sanctuary. Ironically, the kites are titled ‘With Wind’, suggesting what is needed for flight.

Some of the kites that form the dragon have quotes from human rights activists who are included in Trace, installed in the second vast room of this former industrial factory where prisoners once made army uniforms under heavy guard.  From looking up at kites, we look down to the floor at portraits of 176 people imprisoned for their political beliefs in 33 countries. The portraits are constructed in small Lego elements, with various sizes and colours, arranged on a grid with a white (Lego) ground; we see them as individuals, linked by a common structural restraint.

Ai Weiwei figured it all out from China. But he is also an architect (he collaborated on the Birds Nest Stadium for the Beijing Olympics), so he was able to work with models and dimensions.   Before I went I was dubious about the use of Lego, but actually, the digitized portraits perfectly express the barely visible condition of prisoners.  A few honour deceased heroes such as Nelson Mandela and Martin Luther King.  Nearby, Edward Snowden and John Kiriakou, the former CIA officer who publicly discussed waterboarding, appear prominently. Nearby, 38 Chinese prisoners form a single large segment on the floor, the only panels that were assembled in China. The other five segments were put together over three weeks by 90 volunteers following gridded patterns, a demanding and complex process.

As we move through the vast room with crumbling plaster on the walls and derelict fixtures from 50 years ago (the public has not been admitted here before), we look at faces and names. We can’t walk on the Lego, so we see many of the faces from afar, again appropriate for these ‘disappeared’ detainees. In a book on a pedestal, as well as online, we can read each of their stories. The artist and his team worked in collaboration with Amnesty International to select the names to include, and these are only a fraction of the possibilities. They include Meriam Ibrahim from Sudan accused of apostasy and adultery, and less well-known cases such as  Irom Sharmila Chanu, charged with an attempt to commit suicide in India or the many people from Bahrain accused of organizing a terrorist group, or the Saudis convicted of ‘breaking allegiance with the king’.

From the USA, there are six names and only one prisoner from Guantánamo, Shaker Aamer. I expected to see Mahamedou Ould Slahi, who has just published the incredible Guantánamo Diary detailing the torture he survived.There are still 122 prisoners at Guantánamo, 56 of whom have been cleared for release. Those prisoners, like the political prisoners in ‘@Large’ are all victims of a profound violation of human rights, falsely accused on trumped up charges. As I read the Declaration of Human Rights included in the ‘@Large’ catalogue, I realized that every one of those rights is violated in the USA.  Descending to a narrow passageway, we look down through broken windows to  view a third installation in the same immense building. Originally, armed guards stood here watching prisoners work. In appearance, Refraction suggests the wing of a huge downed bird. Made from giant solar panels used in Tibet as solar cookers, it again represents immobility. From another passageway above, we can view Trace and With Wind obscured by the grids of windows with broken panes.

From the New Industries building, we descend down the hill to Cellblock A, part of the public tour of Alcatraz. As we join the crowds of people who are now being unexpectedly exposed to ‘@Large’, we sit on small stools in a decrepit cell, to listen to the songs, poetry or speeches by people or groups, imprisoned for their creative expressions. There are the well-known singers, such as the Nigerian Fela Kuti , and Russia’s Pussy Riot. But we also hear Liao Yiwu’s poem Massacre in honour of Tiananmen Square, Sudan’s people’s poet Mahjoub Sharif, Chilean Víctor Jara and Persian poet Ahmad Shamlu.

Even more penetrating is Illumination, another sound installation in what were the psychiatric isolation units of the prison hospital attached to Cellblock A.  We hear the chants of Buddhist monks and Hopi Indians (who were imprisoned at Alcatraz for refusing to send their children to government boarding schools) in adjacent windowless spaces.

Also in the hospital, Blossom fills derelict sinks, toilets and bathtubs almost to over flowing with hundreds of white porcelain flowers.  Putting them into plumbing fixtures suggests they could be flushed away at any time. The flowers also refer to the 100 Flowers Campaign in China, when intellectuals were invited to present critiques of Mao, only to be sent into exile. Ai Weiwei’s father, Ai Qing, was a famous poet in China; he was sent to clean toilets in the Gobi desert.

The final installation, Yours Truly, appropriately placed in the dining hall of the prison, offers an opportunity to correspond with political prisoners: post cards are pre-addressed to the people featured in Trace. As we write, we know that this small act provides a crack in the devastating isolation of those lost in a prison or detention system.

Ai Weiwei cannot leave China, but his outspoken protest of unjust imprisonment and detention and his stand for freedom cannot be contained.

‘Freedom for me is not a fixed condition but a constant struggle’, Ai Weiwei, Beijing 2014

This exhibition is now closed.