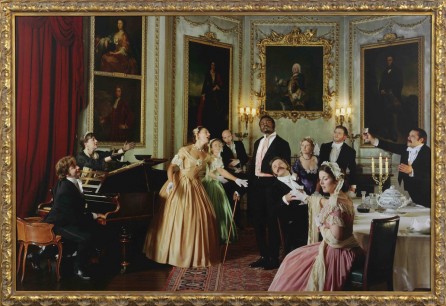 Roy Clark is impressed by ‘Staying Power’, a small but highly effective exhibition on black British experience, as captured by some highly gifted photographers

My first thought upon receiving a notification about this photography show at the V&A, was why the black British experience is so seldom the subject of an exhibition. With the honourable exception of The Museum of London’s 2005 show ‘Roots to Reckoning’ it is hard to think of a major photographic exhibition on the subject by a UK public art institution in recent years.

From a photographic perspective alone the subject is without doubt an important one. Successive waves of post-war immigration to the UK and the resultant cultural and social exchanges between the incomers and those already here form fertile ground for documentary photographers, photojournalists and street photographers alike. This is, of course, especially so for those drawn from the African and Caribbean communities themselves. It does seem extraordinary that such a rich vein of the UK’s recent cultural history has until now been relatively overlooked by museums and galleries.

Collaborating with the Black Cultural Archives organization for the last seven years, the V&A has made a serious (if somewhat belated) effort to form a significant collection of photographs by black photographers and others that document the black experience of living in Britain.

The net result, based on the evidence of an excellent, even if somewhat small, selection on display is a fascinating and important archive of photographic and cultural history.

Charlie Phillips, using only a second-hand Kodak Brownie camera to document community life in the Notting Hill  of the 1960s and ’70s, achieved a degree of nuance and tone in his black and white images that is hard to credit to such a basic camera. Images such as Cue Club Regulars'and The Pisshouse Pub reveal an eye for detail and composition almost classical in nature and yet always startlingly authentic.

Al Vandenberg was a pioneer of street photography in both Europe and America. His deceivingly simple series ‘On a Good Day’ harnesses the straight-on approach now common in documentary street shooting, affectingly conveying both the vulnerability and resilience of black Britons during the 1970s.

A very different set of photographs are those of James Barnor.   Proudly saluting in her police uniform, Barnor’s   Selina Opong, Policewoman #10reflects the confidence, hope and pride of the newly independent Ghana in a studio portrait, whilst the shadow of the recent colonial past is represented by the continued use of an old-fashioned stage-like backdrop. In his later work in 1960s London for lifestyle magazines he showcases the adoption of fashionable western hairstyles and dress modes by African émigrés making their lives in Europe.

Mining a similar theme but in a very different style, Neil Kenlock’s colour work highlights the sense of pride among the West Indian community making their way in England in the 1970s. In one of these charming and delightful images, a young woman sits in front of a television set surrounded by a plethora of other consumer goods. In another a little girl happily poses, telephone in hand, again  pictured among tangible symbols of success, all designed to show the family back home in the Caribbean that they were doing well.

Yinka Shonibare’s  work is very well known in the wider art world and here his large scale ‘Diary of a Victorian Dandy’ series take up one wall. These monumental works reference and pastiche William Hogarth’s  18th-century oil painting sequence ‘A Rake’s Progress’.  Although they convey  a clear message on perceptions, preconceptions and racial stereotyping they are rather contrived and obvious to my taste and in the context of the V&A’s decision to make this relatively small show take up too much valuable wall space.

A major highlight for me are J.D. Okhai Ojeikere’s photographs of intricate and sometimes fantastical African  hairstyles and head-ties.  Shot in simple isolation and seen only from the back, these are images of great beauty: almost abstract compositions reminiscent of plant forms. The  textures and exquisite detail reminded me of the late 19th-century plant studies of the German photographer Karl Blossfeldt, which had an airing at the Whitechapel Gallery a couple of years ago.

Recent photography shows at the V&A, notably last autumn’s ‘Horst: Photographer of Style’ (Cassone November 2014)  have sought to give a context to, and deepen the visitor’s understanding and appreciation of, the work on display, with the aid of relevant artefacts. By contrast, ‘Staying Power’ is a rather formal and staid arrangement of imagery. Whilst the strength of this show is undoubtedly the power, vibrancy and variety of the work itself, a little more in the way of audio visual material and supporting artefacts would have greatly improved the impact of the photographic displays. They would be effective in conveying the cultural vibrancy and periodic tensions of 1970s Brixton, Notting Hill and Handsworth, for example.

In fairness this review is for only half the show. The other section (which I haven’t yet visited) is simultaneously on display at the Black Cultural Archives (BCA) at its heritage centre in Brixton.

For all its shortcomings in depth and quantity, the quality and power much of the work currently on display in South Kensington is undeniable. It is a tantalizing taster and one hopes it is the first step in a bigger exploration yet to come.