A painter's career: From West Side Story to Downton’s creator 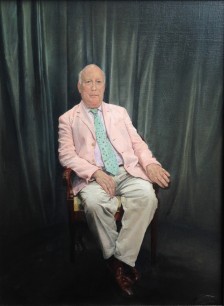 Teri Anne Scoble attended Corona Academy in the 1950s. After a career as an actor, dancer, choreographer and theatre school proprietor, Teri picked up a paintbrush. Her first professional success was the acceptance of a painting into the BP Awards. Last year Teri took part in Sky Arts Portrait Artist of the Year and was an Edinburgh Heat Finalist. The portrait she started on that programme was recently on show at the Royal Society of Portrait Painters in the Mall Galleries. (See Art News for April.)

Sue Ecclestone: Teri, you have had a busy few months since taking part in the Sky Arts Portrait Artist of the Yearcompetition. I get the impression that your life is something of a whirlwind – tell us about your life before you became a painter.

Teri Anne: Since a very early age I’ve worked in the entertainment industry. Aged two, I appeared in a Gregory Peck film with my identical twin sister. Numerous films followed including Village of the Damned (1960) and The Elephant Man (1979). There were also acting roles on the West End stage. However, dancing has been my biggest passion and I’ve performed in many stage productions including every dancer’s dream, West Side Story. By the 1970s I was a successful choreographer with Granada TV working with many headline acts. I gave guest workshops throughout the UK and taught dance at most of the top theatre schools in London. In 1996, I opened my own school and acting agency, but gave up this very successful business in 2010 after a life-threatening illness, as I knew I needed to try to paint professionally whilst I still had the chance.

SE: When did you discover your passion for painting?

TAS:  I received my first oil painting kit for a Christmas present when I was seven, so I have always painted. In fact I used to paint backstage while hanging about in-between performances and would often paint fellow cast members.

SE: You had a work chosen for the 2013 BP Portrait Awards – Mrs. Damon and Mrs. Healey  – which must have been very thrilling for you, how much portraiture had you done up to this point and had you taken any lessons?

TAS: I had done those backstage portraits over the years, as well as still life, pets and landscapes. I have never had any formal painting lessons, and so being accepted into the BP Portrait Awards has definitely been one of the biggest highlights of my life. My sights are on other exhibitions now; I am thrilled to have a painting in this year’s Royal Society of Portrait Painters Annual Exhibition.

SE: Is the purpose of portraiture to create the best likeness of the sitter?

TAS:  I like to get to know my sitter. I do a fair amount of research so that even when they are immobile in their pose, I have some concept of what is going on behind their eyes: I like to capture that. Although portraiture is a snapshot of a moment, viewers need to be engaged – to ask questions about the person represented. Therefore, even when a sitter doesn’t want to talk and open up, if I know something about them I can capture a version of them that provokes questions.

I like narrative in my work, along with (if appropriate) a sense of humour. Composition, texture and colour are important and I approach a painting rather as I would choreograph a dance routine. I see the shapes and formations as dancers and the colour as dance steps and costumes. Like dancing, painting is all about balance. I undoubtedly want to achieve the best likeness with a portrait, but oh so much more.

SE:What made you apply for the Sky Arts Portrait Artist of the Year award?

TAS:  My daughter-in-law entered me in the last minutes before the entry deadline. Seemed like a crazy challenge: I’m always up for one of those.

SE: The self-portrait you entered had an unusual composition, showing you just looking round a door with your coat slung over your arm. How did you come to choose the pose?

TAS:  I first painted myself peering round a canvas on an easel with a palette in my hand ≠ a typical self-portrait of an artist and if the painting is ever x-rayed you will see the palette complete with blobs of paint underneath the coat, but in the end I just wanted something different, to provoke those questions that we discussed earlier.

SE: You were a Heat Finalist in the Sky Arts competition and your sitter was Lord Julian Fellowes.  Again you seem to step outside the norm and painted on a much smaller canvas than everyone else, why?

TAS:  Whenever I draw or paint from life, it comes up small: it’s the way I see it. I went armed with various sizes of boards, canvases and various paint mediums and in the end I chose oils and a wooden panel, which I had already prepared with a skin-toned primer. Lord Julian was a brilliant sitter, very patient.

SE: You didn’t manage to finish the painting on the day, and Christian Hook won the competition, but the judges were very complimentary about your painting. Where is it now?

TAS: I regret not quickly doing some palette knife work to make the portrait look more complete just before the four hours ended. However, I was delighted afterwards when Julian Fellowes commissioned me to finish the portrait. The portrait is now completed and Julian gave me permission to enter it into this year’s Royal Society of Portrait Painters Annual Portrait Exhibition at the Mall Galleries in London.

SE: So from now on will you only paint portraiture?

TAS: No, I’m up for painting anything and everything. I like to keep challenging myself, trying out new mediums and ideas.

SE: What are you working on right now?

TAS: My biggest challenge yet: I am painting an eight-foot full-length portrait of the Royal Ballet’s Principal dancer Edward Watson. This will be more than a dancer’s portrait and I have carried the idea for this work with me since I was a young dancer.

SE: Do you feel that competitions such as the BP Awards and Sky Arts are important for helping progress an artist’s career?

TAS: Competitions are great motivators for an artist and can be a valuable launch pad. I am still receiving commissions since Mrs. Damon and Mrs. Healey was exhibited at the National Portrait Gallery in 2013. Since entering these competitions, my feet have hardly touched the ground.

SE: Good luck, and thank you for talking to Cassone.