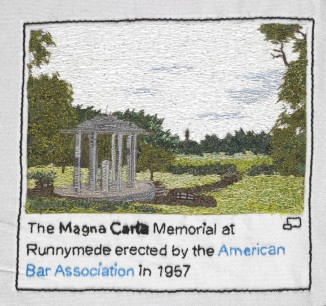 How do you span 800 years of visual culture, combining a craft that was already old 800 years ago with a literary form so modern it is out of date within minutes of creation? And how would you use such a combination to commemorate a revolution that still reverberates across all those centuries?

A few years ago, aware of the approach of the 800th anniversary of the sealing of the original Magna Carta, Paul Bonaventura of Oxford University’s Ruskin School of Art felt that a new work of art was needed to commemorate this event. Oxford University owns two copies of Magna Carta of 1230 and the British Library has two copies of the original 1215 version. The Library was planning the magnificent exhibition on the history of Magna Carta that is currently on show there. It seemed natural for the two institutions to collaborate.

There was agreement that a unique work of art would be an appropriate way to create something that would last beyond temporary exhibitions and other celebrations. The University and the Library are both sources of highly specialist knowledge of Magna Carta and its history, while Ruskin School of Art has considerable expertise in commissioning and working with artists. In collaboration, the Ruskin and the Library were able to attract sponsorship and forge ahead to make a commemorative work of art a reality.

The artist chosen to find a way of expressing the anniversary in visual form was Cornelia Parker OBE RA (b.1956), known for ambitious and imaginative installations and sculptural work. In the past this has involved – for example – blowing up a shed and sending meteorites back into space. Her approach to the problem was one that would prove perhaps more demanding than anything she had tackled before.

On 15 June 2014, the 799th anniversary of the sealing of the original Magna Carta, Parker captured the Wikipedia entry on Magna Carta, as it was on that day. Possibly the entry changed later that day, as new content is constantly added to Wikipedia, and it has certainly grown over the past year. Parker had frozen a moment in the history of a history. She had this printed out on fabric at a much enlarged size – the print out is almost 13 metres long and 1.5 metres wide – in quite faint lettering. Lower-case letters are about a centimetre tall. The entire text, including the images included as photographs on the original webpages, was then embroidered.

One might assume that, at this point, Parker handed the entire job over to a team of professional embroiderers. But it was part of her plan to make this commemorative work express its own time by involving many different representatives of our society. These people ranged from prisoners to MPs and a judge – those subject to punishment for having transgressed the law and those who make the law. All the main political parties and both houses of Parliament were represented, as far as possible – some people turned down invitations to take part.

At one point in the text there is a reference to ‘the common people’ and these words were embroidered by Jarvis Cocker, who wrote the song Common People. Shami Chakrabarti, director of the civil liberties organization, Liberty, embroidered ‘Charter of Liberties’. Jimmy Wales, founder of Wikipedia, embroidered ‘user’s manual’. Others involved included Doreen Lawrence (Baroness Lawrence of Clarendon), author Philip Pullman, musician Brian Eno, artists Antony Gormley and Caroline Lucas, some children from Kids’ Company and of course many more – 200 in all.

Members of the Embroiderers’ Guild and the Royal School of Needlework worked on the images that are included in the Wikipedia entry. These embroidered renditions of photographs are quite stunning. Much of the text was embroidered by 40 prisoners, as there is a scheme that teaches them embroidery as a means of making money. They normally embroider household items such as cushion covers, which are then sold, but Parker told me that many appreciated being able to work on something with historical importance. One refused to embroider the words ‘habeas corpus’  – Parker asked a judge to embroider these words instead.

For practicality’s sake, the Wikipedia article was divided into sections so that different groups could work on it simultaneously. It was pieced together by the Royal School of Needlework at Hampton Court and the images applied to it, having been worked on separate pieces of cloth. Thousands of hours of work were involved in creating the whole thing.

The result is stunning and not to be missed when visiting the British Library. It is displayed separately from the Magna Carta exhibition currently running there – it is in the entrance hall, on the upper level. It will be on display till 24 July 2015. Magna Carta An Embroidery is now part of the continuing history of a document that has had influence around the world and will no doubt continue to exert its fascination. The Embroidery has its own fascination as simultaneously a social document and work of art.

Magna Carta (An Embroidery) will be on display in the British Library until 24 July. It is not part of the exhibition on Magna Carta currently running at the Library, but can be seen in the entrance hall, upper level.

It was commissioned by the Ruskin School of Art in partnership with the British Library and in association with the Embroiderers' Guild, Fine Cell Work, Hand & Lock and the Royal School of Needlework.
The commission has been supported using public funding by the National Lottery through Arts Council England and by the John Fell OUP Research Fund