Fresh eyes on New York – the work of William Klein 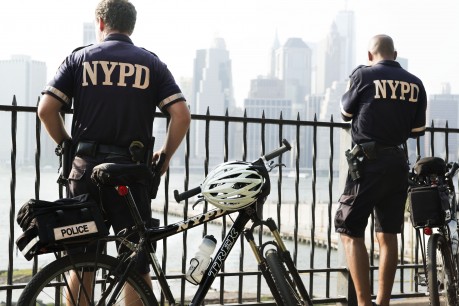 During his long and illustrious career William Klein (b.1928) has left an indelible mark in many different fields of visual media. These include fashion photography, TV commercials, documentary filmmaking and the feature film, but it is arguably Street Photography that has benefited most from his groundbreaking and idiosyncratic vision.

In several ways, the publication of Brooklyn +Klein marks the culmination of a long return journey or ‘round trip’ as an American would say. It was with the publication of another photobook on New York, Lifeis Good and Good for You in New-York (1956) that Klein first burst onto the scene as a photographic image maker.  The city is also Klein’s birthplace and to it he returns nearly 50 years later with a photographic study of one of its famous five Boroughs: Brooklyn.  After a lifetime tramping the streets of other great world cities, the master has come full circle

For me the greatest strength of William Klein’s oeuvre is his unerring ability to witness the world with fresh eyes.  Whether it be Moscow or Tokyo – places he tackled in earlier books – he presents the viewer with life just as it appears before his lens, unfiltered, uncategorized and uninterpreted. The result is an immediacy and ‘is’-ness that has seldom been matched by other practitioners in the field in which he is such an important and influential pioneer.

In the case of those other cities, It might be argued that this approach was due to a lack of personal engagement, knowledge or cultural investment, but Brooklyn+Klein  gives the lie to that thesis, as here on home turf his approach is just as spontaneous and unmitigated as in any of his foreign assignments.

Unlike his approach in much of his earlier street photography from the 1950s and ’60s, Klein is here working with colour, digital colour in fact and for the first time.  Before turning to photography in the mid 1950s William Klein trained as a painter at the Sorbonne in Paris and later under the guidance of the great French modernist Fernand Léger.  Seeing these blisteringly colourful compositions, often closely cropped, such as Jamaican Street Parade or Beach Bodies Coney Island, I find an echo of the style of the teacher, but it is ultimately a superficial comparison. Unlike Léger and the movement he later inspired, Pop art,  Klein celebrates not the surface of things but the underlying humanity in all its gyrations, dynamism and gusto, all bursting with colour, movement...life.

Looking through this photobook, which incidentally was conceived and designed by the photographer himself, I cannot find any significant changes or developments in his style commensurate with age or experience. Nonetheless, this does not, as with some artists, signify a staleness or lack of progression, as when looking at a Klein image one is always witnessing immediacy. He is always celebrating the moment, jumping into the spectacle with both feet. With Klein you are always invited to be part of the experience, just there in the middle of wherever ‘there’ is, from a  carnival or street festival to a party of whirling Hassidic Jews celebrating  a wedding.

An irony of Klein’s work as a groundbreaking street photographer is the contradiction between these images, open to the spontaneity of the moment, and his work as one of the greatest fashion photographers of the 20th century, in which he consciously sought to shape reality. But then again that is perhaps the key to his mastery, knowing when to edit and when to leave well alone.