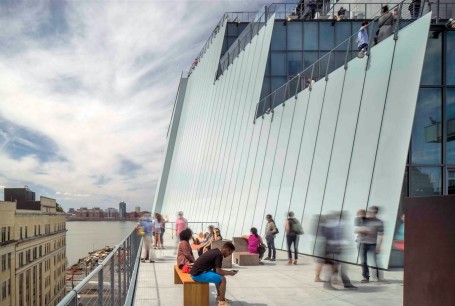 With Renzo Piano’s new $422 million building at the bottom end of the High Line  the Whitney returns to its roots and its various manifestations in Gertrude Vanderbilt Whitney’s studio on 8th Street from 1904, the Whitney Studio Club on 4th Street and then 10th and 8th West 8th Street (1914–27) and the Whitney Studio Galleries (1927–30). It was always intended to be a semi-social and commercial enterprise and of limited duration. Only the Metropolitan Museum’s refusal to accept Whitney’s collection in 1929 precipitated the creation of the museum, directed by Juliana Rieser Force and curated by Lloyd Goodrich, whose seminal shows on Winslow Homer, Albert Pinkham Ryder, Edward Hopper and John Sloan did much to create the subject of American art.

The director of the Metropolitan Museum, Edward Robinson, apparently remarked to Whitney: ‘What will we do with them, my dear lady? We have a cellar full of those things already’. Ironically, the Metropolitan is now renting the Whitney’s Madison Avenue building to exhibit contemporary art. It remains to be seen if this will be a successful venture for the Metropolitan.

While perhaps not up with his Centre Georges Pompidou or the Kimbell Art Museum, Piano’s eight-floor Whitney at 99 Gansevoort Street, between the High Line and the Hudson River, is a stunning, functional building. The 50,000 square foot gallery space with reclaimed wide-plank pine floors is not impeded by supporting columns and has excellent lighting systems, whilst a cascading terrace creates in effect a 13,000-foot square sculpture park on the side of the building. New facilities include an education centre, theatre and study centre. There are dramatic (and often vertiginous) views of the Hudson and Manhattan. And there are some wonderful interactions between inside and outside.

The museum has four distinctive sides. The front seems to reference, in a postmodernist way, the Whitney’s former Breuer building with its beetling layers. The Hudson and East sides are completely different in shape and configuration, whilst the view from the High Lane could be any late-20th century building in the Meatpacking district. The ground floor is almost an extension of the public space outside and Piano claimed that he wanted to recreate an Italian piazza.

At the press preview, Piano said that the building was about freedom, for him the defining characteristic of America. The opening exhibition, ‘America is Hard to See’, references a 1951 Robert Frost poem and the ‘Marxist’ Emile de Antonio’s 1970 film of the same title. Curated by Donna De Salvo, Dana Miller (the editor of the Handbook), Carter E. Foster and Scott Rothkopf, the exhibition of some 650 works (the collection has over 22,000 items and the Handbook covers some 350 artists) is basically in chronological order as it descends from the Eighth Floor. It even uses what is designated as the huge temporary exhibition space on the Fifth Floor, except for the First Floor homage to the Eight West Eighth Street period with its Hopper drawings, a wonderful Stuart Davis 1925 landscape, Yasuo Kuniyoshi’s faux-naïve Child (1923) with its allusions to Cubism and Japanese printmaking, and a 1916 Robert Henri   painting of a rather louche Gertrude Vanderbilt Whitney.

This gallery is intended to be open to the public free of charge. Beyond the usual favourites – Edward Hopper’s EarlySunday Morning (1930) or Jasper Johns’ Three Flags (1958) – the curators have disinterred forgotten artists such as Ruth Asawa or Harry Sternberg (a disturbing anti-lynching print) and added to the collection – for example, the surprisingly previously absent Faith Ringgold, Hugo Gellert and Chiuro Obata. De Salvo notes that ‘the title…points to the impossibility of offering a tidy picture of this country, its culture and, by extension, its art.’ The curators have created 23 thematic chapters – mostly named after a work in the section. ‘Forms Abstracted’ takes its title from a 1913 Marsden Hartley  painting, Music, Pink and Blue from a 1918 Georgia O’Keefe  painting,  ‘Rose Castle’ from a 1945 Joseph Cornell assemblage or ‘Learn Where the Meat Comes From’ after a 1976 Suzanne Lacy video.

Examining the Whitney collection through themes allows for new juxtapositions to be created which allow familiar works to be re-assessed and for less familiar works to surface: in the ‘Large Trademark’ section (effectively a wider and re-contextualized look at Pop Art) is Yayoi Kusama’s collage Air Mail Stickers (1962), which almost got de-accessioned in the 1980s. In the ‘Breaking the Prairie’ (titled after the mural Breaking the Prairie Sod in Iowa State University by Grant Wood) there is a wonderful untitled drawing of a farm interior with stove and woodbox made on found paper from soot and spit with homemade implements: this was made by James Castle, who was both deaf and illiterate and who never learned signing: one gets a real sense of the autochthonous isolation of an Idaho farm.

The last section, ‘Course of Empire’, takes its title from Ed Ruscha’s  series which itself references Thomas Cole’s  19th-century painting cycle of an empire’s rise to power and its collapse into war and ruin, and deals with the period after the 2008 financial crisis, post-industrialization, the failed interventions in Iraq and Afghanistan, the erosion of American super-power status, and globalization.

Ed Ruscha’s painting in this section, The Old Tool & Die Building (2004) has the building just about making it into the bottom quarter of the work. There is Chinese graffiti on the façade of the building – or is it just sign-writing by the new owners of the former factory, perhaps alluding to where the jobs have now been moved? Earlier, in the ‘Machine Ornament’ section, largely a celebration of American manufacturing might, Ralston Crawford’s Steel Foundry, Coatesville, Pa. (1936–7) undermines the optimism of the bold, flat forms of machine age art with the conspicuous absence of human beings and the bare concrete wall itself marked off by a jagged wooden fence. Perhaps the unease was always there.

This exhibition is an interesting presentation – one wonders how the permanent collection will be displayed after this – and gets one to ask what is America and what is American art? Is it even possible to talk about nationality in art? The Whitney has a very generous sense of who is American – for example, including Aleksandra Mir, Maurizio Cattelan  and Rirkrit Tiravanija: nearly every artist who spent any time in America (especially New York) seems now to be eligible to enter the Whitney collections. And what does this say about the Whitney’s positioning vis-à-vis the Museum of Modern Art? But at least the Whitney has the better building.

‘America is Hard to See’ is at the Whitney Museum of American Art, New York until 27 September  2015