Where is today’s Surrealism? 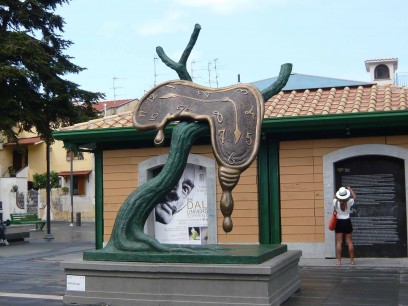 David Ecclestone reflects on what Surrealism’s legacy might be

In Always Looking, John Updike examines American painting and suggests that ‘Surrealism is the natural instinctive pictorial mode’. One of his examples is the landscape by Alexander Hogue  called Erosion No 2 – Mother Earth laid Bare (1936), painted as a vast billowing maternal nude.

If we step back a little closer to the origins of Surrealism in Dada, we could perhaps define it as an evocation of the subconscious using the language of dreams. We see this in the work of  Rene Magritte   and Salvador Dali. The American model is rather different.  It is often an attempt to make the vast landscape graspable by relating it to concepts and experiences centred a bit closer to home.

This dissatisfaction with, even fear of, reality has produced another strand recently, in the field of portraiture.  There is now a reaching for the super-natural.  The real, the natural is no longer significant enough.  It’s too close at hand for anyone with a smart-phone.  So the canvas has to reach beyond and distinguish itself.  Sometimes this is done by demonstrating exceptional skill.  Don’t misunderstand me; I think a return to a skill-based art practice is excellent provided it is accompanied by insight and imagination.  These canvases can be vast, reproducing by hand each bristle on an unshaven face with such precision that it has to be a photograph, which it isn’t, which doubly impresses the viewer.

The other way of establishing the ‘super real’ is to produce (often with immense technical and imaginative skill) a realistic and touching portrait and then deliberately to disrupt the representation with added discordant brush strokes or ruptures of the painted surface to assert the painters presence, lest the subject actually becomes the subject and we forget the painter.  The renaissance painter’s wish to be lost in the real presence of the subject is replaced by the need for the painter to join him or her on the canvas.  Look at last year’s joint winner of Portrait Artist of the Year, Christian Hook.  His talented portrayals of Ian McKellen  and Daniella Nardini do not need a signature for us to know who painted them.  In doing this he draws a partial veil over the brilliantly evoked depiction of a personality.  ‘If you get too close, you might forget me’.

In the Renaissance, the game was to produce on the canvas or in the bronze an imitation of reality that deceived the observer into belief. Reality was the goal.  In the nineteenth century the camera pushed painting into the fruitful crisis called Impressionism.  Will the Smartphone be equally inspirational?