The poetic Romanticism of Samuel Palmer 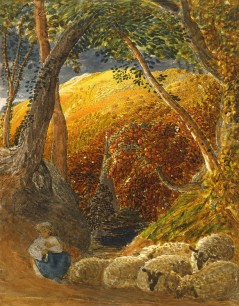 Samuel Palmer: Shadows on the Wall by William Vaughan

This was what the poet W.B. Yeats thought of Samuel Palmer (1805–81) and it probably accords well with our understanding of the artist today. But it was not always so; during his own time he struggled to make a living from his art or to gain recognition beyond a small group of like-minded artists. Two factors significantly shaped his early work, for which he is best known today; firstly, he was not exposed to formal academic training and so avoided the conventions of learning through copying the practices of established artists of the past, and, secondly he was introduced to William Blake.

The example of Blake, who had once asserted that: 'Jesus and his Apostles and Disciples were all artists', steered Palmer throughout his lifetime conviction of the spiritual purpose of art. He was also out of kilter with his own times when the prevailing view of landscape painting was turning towards the naturalism of John Constable,    for his own view was that, no matter how much might be learned by sketching from nature, one should be ultimately guided by the power of imagination. His vision was probably closer to that of the Romantic poets of his generation, Keats and Coleridge and Wordsworth, than to that of other painters.

His typical subjects were scenes of bucolic serenity, shepherds resting (or meditating) while guarding their flock, or harvesters setting out early or returning, weary from honest toil, at the end of the day. Such subjects allowed association with both Classical and Biblical narratives. His landscape settings evoked the suggestion of the 'primitive', like scenes from an old ballad, which accorded well with the ideas of Romanticism. Typically wash drawings in sepia or watercolour, they flattened perspective and adopted characteristic forms of gnarled and pollarded oaks, and ancient cottages were re-formed into almost organic forms.  But, of course, it was his atmospheric lighting that most memorably marks out his work, with outsize quarter moons and starry skies dominating the tracks of the returning labourers.

Conscious of Blake's idealistic demands about the spiritual, anti-materialist obligations on the artist, he grew his hair and beard, giving him a frankly Christ-like appearance. He drew together a like-minded group of young artists, notably Edward Calvert and George Richmond, who styled their brotherhood, 'The Ancients', and who resolved to abandon the evil taints of the metropolis and set up in rural retreat, at Shoreham in Kent. Ultimately, it was only Palmer who committed himself to seven years in such seclusion.  As William Vaughan points out, it was cruelly ironic that, in poignant conflict with the noble image of timeless virtue that Palmer had erected for himself in this pastoral location, the villagers were in fact responding to the hardships of economic collapse by violent attacks  and rick burnings on the local farms.

After this youthful adventure, he set about the task of establishing himself as a topographical artist and engaged on travels to gather material in the newly discovered 'picturesque' locations of North Devon and Snowdonia. He then travelled to Italy, returning with impressive scenes of the remains of Ancient Rome   and Pompeii.  One of the important achievements of this unhurried and comprehensive book is that it treats the artist's working life in its entirety, resisting any tendency to concentrate only on what a later generation determined to be his only significant period, thus opening up opportunities for informed reassessment.

As it happens, Palmer's name might well have slipped into the morass of oblivion had it not been for his rediscovery in the early 20th century by the generation of English printmakers and painters who included Graham Sutherland,  Paul Nash,   Eric Ravilious   and John Piper, in whose eyes the 'primitive' artist of Shoreham was now hailed, not only as anti-Victorian but even as proto-modernist.

William Vaughan, in this attractively illustrated volume, has successfully brought off the difficult trick  of marrying the highest standards of scholarship to an attractive and rewarding  presentation, equally accessible to both the specialist and non-specialist alike.

Samuel Palmer: Shadows on the Wall