Holding on to China's present at the moment of its demise 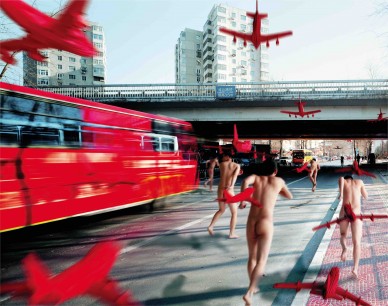 China's urban landscape is changing faster than that of any other country, ever - Chinese photographers are using imagination and skill to capture the transitions

Along with the earthmover and the crane, the 'nail households' are a common sight amid the vast tracts of Chinese urban land being cleared for construction. These stubborn urban guerrillas refuse to vacate their property in defiance of the city planners, developers and local administration, who are forced into protracted negotiations in order to adequately compensate and rehouse each of these civic nuisances. Even with such defiance, progress cannot be halted and the developers inevitably move in.

In 2007 photographer Jiang Zhi set up a theatrical spotlight above one such isolated nail household in the city of Chongqing, literally highlighting the disparity between the old two-storey dilapidated house and the rising city encircling it. A week after the photo was taken the spotlight was gone and the house had vanished. Jiang Jiehong's excellent book An Era without Memories is a study on the vanished and the vanishing. For while China undergoes its rapid urban expansion, at a scale never seen before in the history of the world, something has to give. Despite the vastness of the country, the old urban centres are the preferred sites for development, and large areas where the working population lived and worked have been swept away and turned into homes and offices for the new Chinese. This is the generation born since the death of Mao Zedong and even since the deaths in Tiananmen Square in 1989.

Photography seems best suited for capturing this transformation but not simply as reportage but as art. We only have to remind ourselves of the artistic revolution that occurred in Europe at the end of the 19th century against the backdrop of massive industrialization and urban development. Nascent photography played its part then in capturing the excitement along with the fear of change; and in the development of new art forms and audiences. So too in China, photography, so long the monopoly of state propaganda, is now in the hands of young artists free from state interference and using their own photo-language not only to visualize the change happening, but to place it in a new political discourse.

Photography can indeed 'hold on to the present at the moment of its demise' but the rapidity of change seems to be beyond even this most immediate of media. This book shows how Chinese photographers have met this challenge and how they have tried to capture what China really looks like, not merely by recording facts but by engaging with both memory and the imaginary.

A quick look at the figures puts this project into perspective: between 1980 and 2010 the urban population of China grew to more than 50 per cent of the total. This has entailed not simply enlarging existing cities, such as the expansion of Beijing, but the transformation of towns into cities, in addition to new urban projects where there was previously arable land. Today nearly all urban China is new, built since 1980. The populations are forever on the move and most people have moved at least once and often more. This does mean an improvement in living standards such as services, space and comfort but the ever-resourceful Chinese have to contend with loss or change in livelihood and major challenges in maintaining contact with family and friends. Furthermore for those that re main the familiar landmarks and their own mental maps have gone; their homes, temples, their memories destroyed or repositioned. In fact, new words have entered the vocabulary such as domicide and memoricide to capture the violence of this modern Chinese phenomenon.

Jiang Jiehong, professor of Chinese art at Birmingham City University, has tackled this project from different positions. His opening rightly focuses on the tension between construction and destruction of the urban environment. He presents the photographic works of contemporary artists, who in different ways express the old and the new. Examples include the works called simply The Square by Shao Yinong and Mu Chen. During his reign, Mao’s cult was reinforced through his image, and particularly through his statue placed in city squares throughout the country. Shao and Mu set about photographing as many of these statues, right arm raised as if addressing the crowd, before they vanished. In doing so, and by hand-tinting their photographs, they have produced an eerie effect in that the images, dating from 2003, lose their place in time. They could have been taken at any moment during the Mao era: the surrounding landscape may have changed but Mao remains.

This theme of change is further examined in an extraordinary pair of photographs by Zhang Peili, The Entry of Hangzhou Parterre – One Year Apart 2000–1. The first image is curious in itself; a symmetrical Western classical tree-lined boulevard, centred on a decorative arch. The second image is completely different, containing not one single element found in the first, yet the setting is the same just one year later. Zhang's original project of looking at hybridity in public art is now shelved for the study of altered realities, a theme further explored by the author.

Ma Liang's Postman is photographed on his imaginary round in a city that he no longer recognizes. The images have been worked up and a foreboding sky seems to bring the threat of a storm that blows the mail that cannot be delivered through the unfamiliar and confusing alleyways of the seemingly deserted city. Moreover, Kaixian, the hometown of Yang Yi, is indeed one such deserted city. The infamous Three Gorges Dam, the world’s largest hydro-electric facility, displaced well over a million people and submerged many homes as well as cultural sites. Yang's A Sunken Homeland series consists of photographs of the empty streets and buildings before the flooding but he and others imaginatively return to the now inundated town, complete with scuba-masks.

Jiang's broad collection of artists and their work succeeds in highlighting the spectacular advances, both economically and socially, being made in the People's Republic of China but also the cost to collective traditions and to individual memories. The myth of the permanence of Chinese culture is now truly laid to rest as the urban landscape transforms on an almost daily basis. Yet there remains some beauty in these images, and colour, excitement and humour too. As China continues to make its advances, Chinese photo-artists stand ready to capture the moment critically.