Jackson Pollock’s quest for the meaning of life 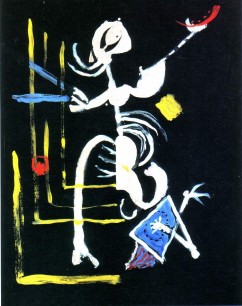 A new book shows how Jackson Pollock’s work reflects ‘an arduous journey, a quest for the meaning of life’

This book is a long-overdue addition to the literature on Jackson Pollock, perhaps the greatest modern American painter, as Life Magazine first suggested in 1948. Most such claims focus on the large abstract paintings Pollock did between 1947 and 1950.  Elizabeth Langhorne demonstrates that these works have their place in an arduous journey, a quest for the meaning of life.   We come to see the abstract poured painting with new eyes.

Kunst als Sinnsuche is a delight to read.  The elegant prose, the clear chapter divisions and detailed subheadings, as well as the numerous images and illustrations, many of which here for the first time, allow us to follow Langhorne’s thinking and explanations, and indeed Pollock's own quest.

Two viewpoints have dominated interpretations of Pollock’s art: the emphasis of one critic, Clement Greenberg, on its formal, aesthetic aspects and the understanding of another, Harold Rosenberg, of art as an expression of individual self-assertion.  Both, Langhorne shows, fail to do justice to the spiritual dimension of Pollock’s art.  What Pollock was trying to do was something else: he was looking to art to discover his place in life.

Early childhood experiences are formative.  The youngest of five boys (b. 1912), Jackson was his smothering mother’s favourite.  She would remain a constant source of anguish.  It was in high school in Los Angeles that his art teacher, Frederick John St. Vrain Schankowsky, introduced the needy Pollock to esoteric ideas drawn from theosophy, yoga, Indian philosophy, and Buddhism, which remained with him long after his arrival in New York (1930), where he found a caring mentor in the painter Thomas Hart Benton.

The works of the Mexican muralists, such as José Orozco (1883–1949), and encounters with American Indian Art suggested an alternativeto the catastrophic turn Western civilization had taken after the First World War.  Of special interest are the impressions Orozco’s murals made on Pollock: the old American Gods were to help create a new authentic New World civilization.  As Langhorne points out, Pollock’s early painting Birth, c. 1941 can be understood as a celebration of such an American renewal.  In Naked Man, 1941 he portrays himself as a shamanistic agent of transformation and healing.

Picasso’s Guernica (1937) made a lasting impression when Pollock saw it in 1939.  The way Picasso dealt with death and destruction, symbolically represented by the horse, the bull, the screaming woman, spear and sword, inspired Pollock's visual thinking: in his sketchbook drawings and doodles he tried to draw on these symbols, in search of solutions to his personal problems.

Pollock’s spiritual interests eventually drew him to John Graham and the way he applied a hermetic alchemy to art.  Soon the Surrealists were to become important to him.  But how much he owed Graham is suggested by an answer he gave much later when asked who really understood his abstract art.  Was it Greenberg?  His answer: 'No. He has no idea. There is only one person who really know what I am about and that is John Graham’.

Frequent depressions, combined with bouts of excessive drinking, brought Pollock in 1939 to Joseph Henderson, a Jungian analyst.  The Jungian colouration of Pollock’s quest, long resisted in the literature, is corroborated by the fact that in 1942, Pollock’s wife, the artist Lee Krasner brought The Integration of the Personality, by the psycho-analyst Carl Jung,  into the apartment that she and Pollock shared.  Her and their friends' recollections testify to the way Jung’s teachings shaped the evolution of Pollock’s art.  In many works male and female personages flanking a central image, often an animal, are the subject, as in Male and Female, 1942, Guardians of the Secret, 1943, Male and Female in Search of a Symbol, 1943.  Attempts to come to terms with eros generate formal strategies, as polar opposites give way to an ever more integrated, spontaneous circulation of energies throughout the pictorial field.

These strategies evolve to inform the poured abstractions of 1947 to 1950.  While in his early abstract work, such as Mural, 1943, tall, curved figurations dance across the picture, toward the end of the 1940s patterns become entirely abstract, as the artist danced around the canvas on the floor.  He was now 'in' his paintings, finally able to achieve harmony without resorting to the human figure, creating an all-over pattern that Greenberg strongly encouraged.

Pollock felt great at that time. He had given up drinking and enjoyed life with Lee Krasner in their bucolic Long Island home. As a modernist artist, he said, he was expressing his feelings in a new and modern way.  His novel technique of laying the canvas on the ground and making a painting by pouring, dripping and splattering paint was suited to exploring and generating his energy fields.  With a painting such as Autumn Rhythm, one of the monumental abstractions of 1950 for which he is best known, he felt he had the harmony he had so long sought, that he had 'done it’.

Had he?  By this time Pollock was a celebrity. By late 1950 Pollock had begun to doubt himself.  Art had not given him the answers he had sought.  That Thanksgiving, after a gruelling session with Hans Namuth, who filmed Pollock as he painted, followed by a big row at the dinner table, Pollock reached for the bottle again, resuming his bouts of drinking, followed by deep depressions. It was the beginning of the end. The black and white stained paintings that followed are indications of his bleak moods, the re-emergence of figures evidence of his continued quest.

Langhorne's attention to the persistent spiritual dimension of Pollock's life's work open us to the full complexity of his position as a modernist artist caught between an emergent aestheticism, existential questions of the times, and a need for a meaning in life larger than his own self.  The artist’s ceaseless striving forms a story at once tragic and exhilarating.

It is my sincere hope that this book will soon be published in an English version for the US and UK.   After all, Pollock is one of America’s heroes, and such important information and insights about this 20th-century American artist should be made widely available.

Please note that this book has so far been published only in the German language. We include this review as we we feel that the content will be of wide interest. We hope that an English language version of the book will be published in due course.