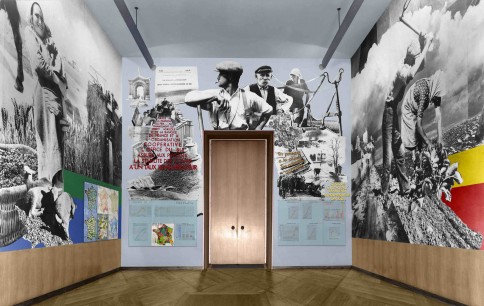 In October 1927 Charlotte Perriand, a progressive young designer in Paris, submitted to the Salon d’Automnean ensemble of furnishings she had created for her own apartment. Exhibited as Le bar sous le toit (the bar under the roof), her installation attracted attention for its striking modernity; it was featured in several prestigious magazines. The stools with tubular metal legs and the curving bar top, all of nickel plated copper contrasted with colourful leather seats to evoke the dynamic, curvaceous forms of stylish automobiles. Her Nuage bookshelf elegantly combined a storage element with a room divider to define space in an ingenious manner. An admirer suggested to Perriand that she should be working with Le Corbusier,  whose audacious writings and completed houses had shaken the architectural world.

Perriand, already inspired by Le Corbusier’s ground-breaking book Vers un Architecture (1923) called at his office with some drawings, but was dismissed with the terse comment ‘we don’t embroider cushions here’. As she left, she told him about her show at the salon. A visit to the exhibition overcame his prejudice; he recognized her ability to transform furniture and interior design as he had transformed architecture. Convinced by her talent, he immediately invited her to join his studio to design furniture and interiors.  Thus began a period of lively collaboration between Charlotte Perriand, Le Corbusier and his cousin Pierre Jeanneret that lasted for ten fruitful years.

The publication of Charlotte Perriand: Complete Works, Volume 1, 1903–1940 by Jacques Barsac brings Perriand’s life and work into the limelight. It demonstrates the critical role she played in Le Corbusier’s studio and her stellar performance as an independent designer.  In eight chapters, each divided under many helpful subheadings, he leads readers in a lively way through this critical phase of her career. He reveals the evolution of her designs, explaining her philosophy and illustrating her process from explorative sketches to manufactured prototypes and entire interior installations.

Barsac gives a detailed picture of Perriand’s life as a vital member of a team sparking ideas off each other as they refined designs, as well as relaxing or celebrating together. Anecdotes and photographs convey their joie de vivre. One revealing image shows the attractive, smiling Perriand with Le Corbusier’s hands holding a plate behind her head as a halo. Barsac also outlines her association with artists and intellectuals, as a political activist, photographer, keen traveller and mountaineer.

Before Perriand’s arrival in the studio, Le Corbusier had installed simple wooden furniture, especially Thonet bentwood, in his houses. Once Perriand began working with him, her ergonomically designed furniture of polished steel tubing, juxtaposed with wood and leather, became essential elements of his interiors. It reinforced Le Corbusier’s belief in the use of industrial products instead of hand-crafted items.  By 1928 a selection of her furniture appeared in his Villa Church at Ville d’Avray and the Villa La Roche in Paris, two iconic houses that embodied the architect’s principles.

Perriand was not the first to design a chair of metal tubing: Marcel Breuer had conceived the idea at the Bauhaus in 1925, while admiring the handlebars of his bicycle. He quickly produced his first prototype and continued to develop alternative designs over the next few years. Although Perriand may have been influenced by Breuer, she constantly demonstrated originality. Her adjustable chaise longue basculante (tilting reclining chair) of 1928 broke new ground. By enabling the upper structure of steel tubing and leather to change its relationship with its wooden base, she provided three alternative positions. The first served as a comfortable chair for reading and conversation with the head raised, the second as a reclining chair, and the third with the user’s feet higher than the head.

In the same year she produced an adjustable armchair with an open frame of tubing and, for people who wanted ‘chairs that completely enveloped the body to provide full relaxation’, she designed the fauteuil grand confort in which an external tubular frame enclosed bulky squared cushions. Her line of furniture also included pivoting chairs and stools as well as extensible tables

Later in 1928, the Salon d’Automne featured the interior of an entire apartment by Perriand that demonstrated both her talent and her amazing productivity. EntitledUn equipment intérieure d’une habitation, it was described by Max Terrier in Art et Decoration ‘as a manifesto, a proclamation, a declaration against the bourgeois ideal of the upholstered living room’. While some journalists found the chromium plated steel cold, one British critic described the ambience of the apartment as erotic. The significance of this project was her creation of a modernist gesamtkunstwerk (‘a total work of art’): a design in which all elements conformed to the same aesthetic and functional principles. Sleek and efficient kitchen equipment, a shower concealed in a metal cylinder next to the bathtub, multi-purpose storage elements between spaces were combined with innovative tables and chairs to produce a total work of art.  The author devotes 14 pages to this important exhibit, illustrating it in great detail.

Barsac also devotes plenty of space to the design process for the villa for the art collector Raoul La Roche. While Le Corbusier had focused on the interplay of volumes and spaces, Perriand considered how best to display the works by Picasso, Léger and Braque that would fill the house. She suggested subtle modifications and designed original lighting strips that would illuminate the paintings while spreading a soft light onto the ceilings. She collaborated with her two partners on a unique table, the table-manifeste with a thick black marble top resting on one solid leg of concrete and one slender V shaped leg of steel, demonstrating the characteristics of the different materials.

Perriand also made time for political activities: she was an organizer of the Union des artistes modernes, which broke away from the more conservative Salon des artistes décorateurs andshe joined theAssociation des écrivains et artistes révolutionnaires.She played a vital role in CIAM (the International Congress of Modern Architecture), an organization dedicated to the ‘battle against the forces of academicism’. She became the secretary of the CIAM for France, and contributed to the book written by her Spanish friend Josep Lluis Sert, Can our Cities Survive?.

Perriand’s involvement with CIAM and the spectre of Fascism drew her focus away from expensive furnishings to the fundamental issues of housing and urbanism, and aroused her interest in communism. In 1931, at the time when Le Corbusier was working on the design for the Palace of the Soviets, she visited Russia, where she met the constructivist architects Leonid and Alexander Vesnin, El Lissitzky   and other revolutionary architects. She even considered going there to work, but she must have been aware of Stalin’s repression of avant-garde artists and intellectuals.

In 1937 a rift developed between Le Corbusier and his partners, Pierre Jeanneret and Charlotte Perriand. The three had worked together in a dynamic manner for a decade, but at this point differences of opinion, perhaps of a political nature, seemed insuperable. After that, Perriand collaborated with her close friend Fernand Léger  on a Pavilion for the Ministry of Agriculture and executed commissions for furniture. She also developed designs for a mountain retreat and prefabricated shelters for disaster relief. Meanwhile she continued to collaborate with Sert on his book.

In 1940, the Japanese government invited her to Tokyo to become an adviser on industrial art. At this time Japan remained neutral. She left Paris two days after the Germans entered the city. Sadly, the author concludes the book by citing a spiteful tirade written by Le Corbusier in which he ‘took himself to be God the Father, [while] Charlotte Perriand played the role of Eve who sowed discord in the Garden of Eden’.  Finally, Barsac writes: ‘He prepared to pay court to Maréchal Pétain [who collaborated with Hitler]… While Perriand sailed towards Japan, where she would promote Le Corbusier’s work and direct the production of an entire country in the field of design and household equipment’.

This lucid, beautifully designed book makes a brilliant contribution to the literature of modern design; I can’t wait for the publication of Volume II.