The paradoxical universe of M.C. Escher 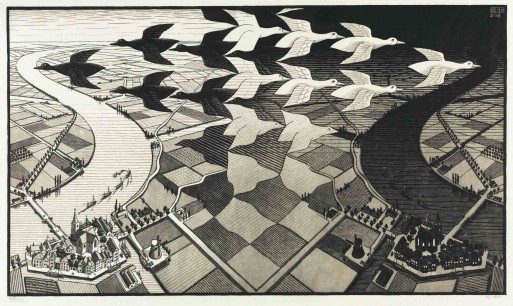 Sarah Lawson steps into another dimension at the Dulwich Picture Gallery

M.C. Escher (1898–1972) was a one-off if there ever was one. His work is instantly recognizable but not exactly predictable. He didn’t fit into any of the established schools of his lifetime. He was undeniably a surrealist, but apparently had no connection at all with the surrealist movement. Now and then you see what might be the influence of René Magritte   or Paul Delvaux,  but it seems that such resemblances are accidental. He took some mediaeval motifs from Hieronymous Bosch (c.1450–1516), noticeable in some of the architectural pieces where early Renaissance figures climb stairs that never were.

A visit to the Alhambra in 1922 was profitable, but Escher was already experimenting with tessellations before he saw the Moorish tiles. Nonetheless, he learned techniques from them in what he called the ‘regular division of the plane’. He was fascinated by the way the shape of one object might fit like a piece of a jigsaw puzzle into that of another, and how these repeated forms might create paradoxical patterns. So in his Day and Night, a woodcut from 1938, black geese fly to the left across a light Dutch landscape; they originate from the dark spaces between a flock of white geese flying to the right above an identical but dark Dutch landscape.

There are themes of infinity, interlocking patterns, and paradox, but each picture is a new adventure for the eye. His interest in these themes began early. Initially intending to be an architect, he showed such aptitude for graphic art and printmaking that one of his teachers advised him to switch to the graphic arts department. Escher would become a consummate technician, unequalled in his skill as a printmaker, and buildings would remain a favourite subject.  Some early prints in the show are fairly conventional landscapes of rural Italy, but before long some recognizable motifs begin to appear.

What was his fan base?’. Escher’s greatest fans are a curious collection of mathematicians, young people, printmakers, and hippies. Escher’s prints are well known: the hands drawing each other, the impossible architecture that is on more than one plane at once, he bird’s eye perspective, the shapes morphing into something else. Mathematicians were captivated by his illustrations of geometric impossibilities, like the famous ‘tri-bar’ triangle made of wooden bars that seem to have three perfect corners, but taken as a whole the figure cannot exist.

There is always a paradox in all representational art: the picture gives the illusion of being three-dimensional while really being on a flat piece of paper of canvas. ‘But,’ Escher must have said at some point, ‘why not show figures that are both at the same time?’ So in Reptiles (1943)  his lizards crawl out of their design and make a little circuit of the table top before re-entering the flat drawing, to be repeated endlessly. But the joke is that the whole performance is still on a flat piece of paper.

These prints are hypnotic. You look at people going up and down stairs that somehow are not quite stairs, but what exactly is wrong with them? They are either all on the same level while seeming to connect different levels, or they are actually inside-out and upside down. There are columns with normal-looking bases and then somehow the tops are in quite impossible places, but how did that happen? Relativity, a lithograph of 1953, is a delirious construction of stairways and walls at impossible angles, a world where gravity doesn’t operate and some flights of stairs are upside down. The outside landscape matches the orientation of the window or door through which it is seen. All very well, but it can’t all be true.

The old interest in architecture endured throughout Escher’s life, but don’t look for the buildings of today. Escherland contains unlikely mediaeval towers and open-plan structures with numerous flights of stairs that seem to connect the different levels – but are those floors really on different levels? To underscore the illusion, one such structure has channels of water which all seem to be on the same plane until you come to the waterfall at the end. The waterfall turns a water wheel far below, but how did it get down there when the wheel and the water courses appear to be on the same level?

Escher plays imaginatively with the concept of infinity in both time and space. A Möbius strip with red ants is a little treadmill that goes on forever. They climb up and down in an endless figure eight, infinity upended, just as the reptile and other figures circulate forever in an unbroken procession in other prints.

One of my own new favourites, now that I have seen it for the first time, is Still Life and Street, a woodcut of 1937. A tabletop in the foreground has on it books, a pack of cards, an ashtray and pipe: so far so good. But then in the middle distance one of the books on the table is standing against the side of a building, and the table top extends into an Italian street flanked by shops and apartment buildings with washing lines high above the shops and pedestrians below. As in Escher’s other prints, all the elements make sense individually until you put them all together.

M.C. Escher reproduced the paradoxes of his work in his life by being a surrealist but not a Surrealist. ‘You have to maintain a sense of wonder’, said the artist: ‘That’s what it’s all about’. Indeed, his pictures evoke his own sense of wonder and inspire it in his core audience: all those mathematicians, young people, printmakers and hippies, and anyone else who stops to look at one of his beguiling scenes.

Unlike most exhibitions at the Dulwich Picture Gallery, the pictures do not come from far and wide, but almost entirely from the Gemeentemuseum in The Hague. As far as the curators know, the only original Escher print in the UK is one in the Hunterian Museum at the University of Glasgow, and it is on display here. ‘The Amazing World of M.C. Escher’ was first in Edinburgh at the Scottish National Gallery of Modern Art and is now at the Dulwich Picture Gallery until 17 January 2016.

A handsome catalogue, The Amazing World of M. C. Escher, accompanies the exhibition with a profusion of Escher’s fascinating pictures and good essays by the three editors: Micky Piller, Patrick Elliott and Frans Peterse.

The Amazing World of M.C. Escher

'The Amazing World of MC Escher' is at the Dulwich Picture Gallery, Gallery Road, London, SE21 7AD until 17 January 2016.