The catalytic role of the Bible in 20th-century American art 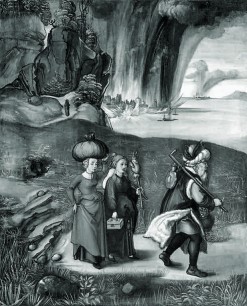 R. B. Kitaj http://www.cassone-art.com/magazine/article/2011/05/the-montage-modernity-of-rb-kitaj/?psrc=art-and-artists  (1932–2007) was born Ronald Brooks in Cleveland to an American–born atheist mother, the daughter of Russian immigrants. He later took the surname of his stepfather, a Holocaust refugee who married Kitaj’s mother when Kitaj was nine years old. Today he is known for his figuration.

All five artists established themselves in the American art world. Yet one area of their collective work has been little understood and indeed mostly ignored, to wit, theirbiblical art. This is an overlooked, rarely examined and little known area within studies of American art, but one that has now been admirably, succinctly, and satisfyingly revealed by Baskind in the writing of this book.