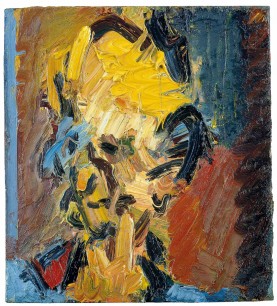 Judge for yourself - Auerbach's work is on show at the Tate until 13 March 2016. David Ecclestone asks whether the curator and artist are just a little too close

An excellent show; by general consent.  Waldemar Januszczak in the Sunday Times awards the accolade of Greatest Living Artist to Auerbach.  The show is extensive, well-hung, well lit, thoughtfully curated (by Catherine Lampert) and the artist’s voice is strongly represented.  What reservations could anyone have?  Just a tiny one perhaps?  Catherine Lampert began to sit for the artist 37 years ago and the collusive arrangement of this exhibition is made clear from the outset.  Auerbach would make the selection for the first six rooms, which would be arranged to represent the six decades from the 1950s onwards, without attempting a strict historical narrative.  Lampert would then be free to make her own selection over the time range for the last room.  Given the strong relationship evident between the two personalities it might come to feel just a bit too cosy an arrangement – lacking appropriate curatorial distance. Well, let’s see.

Despite the artist’s disavowal of too historical an approach, the layout invites it, and it is quite rewarding.  Nude on a Bed of 1959 gives us the conceptual tension of the early years, where the dramatic heavy impasto wants to impose itself in the struggle against the three dimensional structure of the composition and where the colours are recruited to reinforce structure against the dominance of surface.  And it’s this dialogue between surface and composition that is the story of the 1950s.  Sometimes it’s not complicated as in Head of E.O.W. of 1955 which is pretty much a gilded bas relief.  By contrast Head of E.O.W. of 1961 is strongly side lit so that the yellows, pinks and reds of the face fall into a deep dark pit of lost surface. The blackness on the right side become almost a pathological erosion.  Robert Hughes suggests that placing the head so that it is contiguous with the right edge of the board stops it being a bas-relief.  But it’s more than that.  If the head had been placed centrally, the shadow would have been nothing more than a shadow, running into the shade of the background.  This way it is a dramatic attack on the face itself.

In the 1960s Auerbach discarded the technique of adding daily to the accumulation of paint and adopted a procedure of scraping off the day’s rejected composition and starting again on the flat surface.  Sometimes he used acrylics, which made this transition more natural and also allowed brighter colours to sing out.  This is seen in Head of Juliaof 1989–90.  The new colours add an optimism that is reinforced by a change in brushwork which becomes more rapid, compressed and aligned, starting to resembles the cross-hatching of drawings.  It is also evident in the landscapes, for example Looking towards Mornington Crescent Station of 1992–4.

Auerbach’sstudio was remodelled in 1990, reducing the working space, so he started to produce works in pairs: a large canvas and smaller one of the same subject. But the latter is not a preliminary sketch: rather, an autonomous work.  Thin textures still, and the liberated colours start to become more muted and serious in tone until he reaches beyond to the supremely satisfying synthesis of Hampstead Road High, Summer of 1910, with the exuberant runner threading his way through the lamp posts.

There are portraits of the curator of course, but interestingly these are often the less immediately referential canvases – the features less easily recognized.  You can Google a photograph of Catherine Lampert as a comparator, but as William Feaver points at in respect of his own portraits: ‘What Frank produces are Auerbachs first and last.’

So does this close association between painter and curator compromise objectivity?  I think not.  It certainly produces a feeling of enthusiasm from both, but Catherine Lampert retains a cool gaze for something she clearly loves and by laying out clearly where the boundaries are between the painter’s selection and her own an admirable clarity of purpose results.  Go and see this outstanding show before it gets too crowded.

For more on Frank Auerbach, see 'Auerbach – addicted to painting' by Beth Williamson in Cassone June 2015