The unique and diverse work of Gerhard Richter 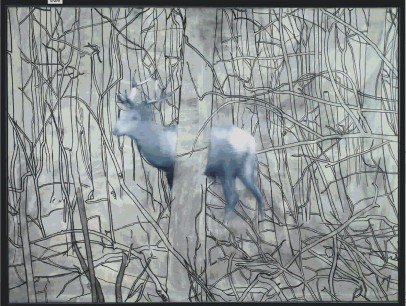 Gerhard's work includes the domestic and the political, the figurative and the abstract. A massive oeuvre demands a massive catalogue. Rosalind Ormiston examines volume 4

Illustrations of the highest quality underlie German artist Gerhard Richter’s six-volume Catalogue Raisonné series, publishing in excess of 3000 individual works created over five decades. Each volume includes a selection of the artist’s notes, each painting’s provenance and bibliography, a commentary, and comparison images. The latest publication, Volume 4, catalogues 578 works dating from 1988 to 1994, created during an intensive period in his career. Within it the reader can appreciate Richter’s oeuvre in exceptional detail. To study the complexity of his work in this richly illustrated catalogue allows for greater understanding of the artist’s intent, although he said:

There is no theory for a work of art. Paintings that can be interpreted and have a meaning are bad paintings. A painting is confusing, illogical, nonsensical. It displays innumerable aspects, it deprives us of our sense of security, because it takes away the point of view and the name of a thing. It shows us that thing in all of its multi-facetedness and infiniteness which does not allow a point of view, a perspective to emerge.

That explains Richter’s unique approach, and the diversity of his art. He is regarded by many as the most important German living artist. Born in Dresden in 1932, by 1961 he was already an established painter when he fled to the West ‘to escape East Germany’s “socialist realism”’. In Dusseldorf his liaison with Fluxus, Sigmar Polke   and Blinky Palermo amongst others, established his international reputation.  With Polke, Konrad Fischer-Lueg and Manfred Kuttner, Richter formed the wonderfully descriptive ‘Capitalist Realists’ group, active 1963–6. Their first show in an empty shop at 31a Kaiserstrasse, Dusseldorf launched Capitalist Realism. It featured Richter’s now famous 1963 series of ‘gray photo-paintings’ which brought him acclaim in the arts world.  The display was followed by Lueg and Richter’s live action show ‘Living with Pop – A Demonstration for Capitalist Realism’, performed in a Dusseldorf furniture shop Möbelhaus Berges. From these strident displays of intense artistic motivation Richter has continued to shock, question and surprise his audience.

In Volume 4, as in the previous catalogues, the Foreword is written by the editor Dietmar Elger. He introduces us to its rich content, including 15 blurred images in paintings from the 1988 cycle 18.Oktober 1977  (cat.667-1 to 674-2), which focuses on the gruesome deaths of the west German left-wing terrorists ‘Red Army Faction’ (Rote Armee Fraktion), also known as the Baader-Meinhof gang. The controversial black and white paintings, first presented in February 1989, at the Museum Haus Esters in Krefeld, addressed a highly political subject, sensitive to Germans. Today the cycle is recognized by art historians as one of the 20th century’s most important works of art. In the same year, and in striking contrast, Richter’s globally recognized, unusual and beautiful painting of his daughter Betty, 1988 (cat. 663-5), was created alongside paintings of other members of his family.

The most breath-taking of Richter’s 1980–90s oeuvre must be the squeegee-type painterly inventions of his oil-on-canvas Abstraktes Bild series, each one dazzlingly vibrant, each one attention-grabbing and sought-after. One of the largest works, no. 599, dated 1986 sold for £30.4 million at Sotheby’s, London in February 2015, a new record for a European living artist (Volume 3, Catalogue Raisonné).

The fourth volume of Richter’s catalogue of works finishes with one of the Staatliche Kunstsammlungen Dresden museum’s most famous works, the enchanting Lesende (Reader),   1994(cat.804) painted by Richter, the city’s favourite son, a portrait of his wife Sabine Moritz. Of this work, possibly informed by Johannes Vermeer’s Girl reading a Letter at an Open Window, 1651–9, Richter is quoted as acknowledging that ‘role models like that are generally in my mind… Reader reminds me of Vermeer’. In this superb catalogue of his 1988-1994 works, one can only admire his phenomenal output, and the creation of original art that captures worldwide attention.