The diverse world of Piranesi 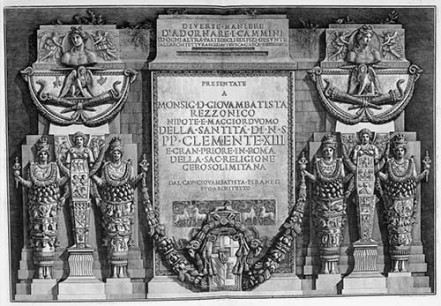 This spring, Sir John Soane’s Museum is staging the second of two exhibitions looking at the relationship between Sir John Soane and the great Italian printmaker, antiquarian and architect Giovanni Battista Piranesi (1720–78).

Taking two of Piranesi’s influential publications as starting points – his 1769 Diverse Maniere d’Adornare i Cammini… and Vasi, Candelabri, Cippi, Sarcofagi… of 1778 – the exhibition will display large-scale 3D prints, directly producing some of the extraordinary designs that Piranesi visualized in these publications, but never actually realized.

The bronze tripods, ‘porphyry’ altars, gilt chairs, shell-shaped silver coffee pots and extravagant candelabra are all stunning examples of Piranesi’s interpretation of classical antiquity. These will be installed within the historic interiors of Sir John Soane’s Museum, London, where the display will resonate with Soane’s own ‘Piranesian’ arrangements of objects. In addition, the Soane Gallery will display seldom-seen drawings from the Soane Office, which illustrate how Soane looked to Piranesi for inspiration, along with volumes of Piranesi prints from Soane’s Library (and from other collections), which illustrate the designs upon which Factum Arte have based their creations.

The Gallery will also contain an evocation of the arrangements that were once seen in Piranesi’s atelier in the Palazzo Tomati, his residence in Rome. Instead of the antiquities, which decorated Piranesi’s ‘museum’ housed in the Palazzo, Factum Arte will install fragments of 3-D prints that explore form and material in an imaginative manner.

The Soane Museum holds a significant number of drawings by Piranesi, a comprehensive set of his prints and a number of antiquities that were restored in Piranesi’s workshop in Rome. It is arguably one of the UK’s most important holdings of works either by, or associated with, his name. More importantly, Piranesi was a great influence on Soane as an architect. Having met Piranesi in 1778, when he was a young scholar undertaking an educational Grand Tour of Italy, Soane used Piranesi’s boundless architectural and archaeological imagination in his own work. Importantly, Piranesi also influenced the architecture of No. 13 Lincoln’s Inn Fields and how Soane arranged objects within his house/ museum. It is this concept of ‘Piranesian’ fantasy and excess that forms the inspiration behind the exhibition.

‘Not only is this exhibition an exciting exploration of Soane’s world, it also addresses broader issues: Sir John Soane’s collections were used, in part, to teach his pupils at the Royal Academy about architecture and antiquity. Utilizing the technologies that were available to him – plaster casts, drawings, prints and models – Soane taught his pupils about buildings and works of art they were unlikely ever to experience in actuality. The three-dimensional printing technology, developed by Factum Arte, opens up greater possibilities. Not only can fragile works of art be replicated down to surface colour and texture, but entire monuments can also be recorded and reproduced in this manner. Sir John Soane, with his love of new building technologies and use of casts and models in his teaching and architectural practice, would undoubtedly have embraced the potential of the three-dimensional print.”

A book entitled The Arts of Piranesi: Architect, Etcher, Antiquarian, Vedutista, Designer will accompany the exhibition, priced at £35.

A bespoke Piranesi-inspired collection will be on sale in Sir John Soane’s Museum Shop as part of the exhibition.

7 April: Using Objects as evidence of themselves

19 May: Artists and their use of digital technology

The architect Sir John Soane’s house, museum and library at No.13 Lincoln’s Inn Fields has been a public museum since the early 19th century. On his appointment as Professor of Architecture at the Royal Academy in 1806, Soane (1753–1837) began to arrange his collected books, classical antiquities, casts and models so that students of architecture might benefit from access to them. In 1833 he negotiated an Act of Parliament to preserve the house and collection after his death for the benefit of ‘amateurs and students’ in architecture, painting and sculpture. Today Sir John Soane’s Museum is one of the country’s most unusual and significant museums with a continuing and developing commitment to education and creative inspiration. The museum is open free of charge: Tuesday to Saturday inclusive, 10a.m.-5p.m. Also, on the first Tuesday evening of each month the Museum is open from 6–9p.m.

Sir John Soane’s Museum is a Non-Departmental Public Body (NDPB) whose prime sponsor is the Department for Culture, Media and Sport.

Based in Madrid, Factum Arte consists of a team of artists, technicians and conservators dedicated to digital mediation - both in the production of works for contemporary artists and in the production of facsimiles as part of a coherent approach to preservation and dissemination. Bespoke equipment has been designed and software has been written to obtain optimum results in both recording and outputting digital information. Factum Arte’s non-contact methodologies are having a growing impact on the world of conservation and are defining the role facsimiles play in the protection of our cultural heritage. The role of facsimiles and issues of objectivity are central to the work. The aim of most projects carried out in Factum Arte’s workshops is to demonstrate how new technologies can assume a central role in the preventative conservation of heritage sites and can change attitudes towards the use of facsimiles (both virtual and physical) in the management and protection of cultural heritage.