Lowry at The Lowry 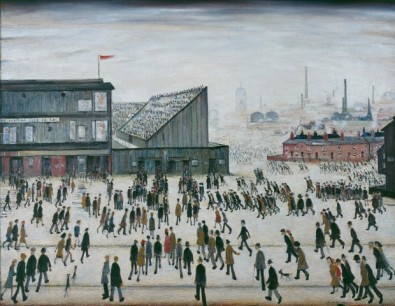 A new exhibition showcasing the work of L.S. Lowry opens at The Lowry this Saturday (13 June) – with more gallery space than ever before dedicated to the Salford artist.

‘L.S. Lowry: The Art & The Artist’ features new work on display including a rare painting of The Liver Buildings in Liverpool (The Liver Building, Liverpool 1959) and a preparatory drawing of Going to the Match (1953), on loan from the Professional Footballers’ Association, which will be displayed alongside its namesake for the very first time.

Claire Stewart, curator of The Lowry Collection at The Lowry, said:
We’re proud to house the world’s largest public collection of Lowry work – and in extending the exhibition in this way we further strengthening that position as the home of LS Lowry.
Some of the new works on display haven’t been seen in public for many years and we are grateful to the owners for the opportunity to present them to our gallery visitors. This new exhibition will also look at Lowry’s contemporaries and highlight what life was like in in Salford in the early 1900s.

The new exhibition replaces ‘Lowry Favourites’, the long-standing permanent collection of L.S. Lowry’s work that has been on display at the Salford arts centre since 2010.

In 2014, the galleries at The Lowry were re-named The Andrew & Zoe Law Galleries in recognition of a £1m donation by the couple’s charitable foundation to the centre – which is itself a registered charity (No: 1053962).