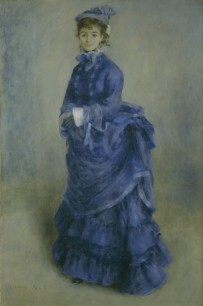 Victoria Keller gets a close view of Parisian chic, 1880s style, as ‘Renoir, Impressionism and Full-Length Painting’ goes on show in New York

Renoir as fashionista is the focus of the Frick Collection's current exhibition ‘Renoir, Impressionism and Full-Length Painting’.  Indeed, the exhibition's curator, Colin Baileyhas commented that the elegant young shop assistant in the foreground of The Umbrellas is dressed in the Prada equivalent of her day.

Unless you're a fashion historian, this sort of thing isn't obvious, but Pierre-Auguste Renoir (1841–1919) was fascinated with fashion.   This is really not so surprising once you know that his father was a tailor and his mother a seamstress.  He kept abreast of the trends, and all the figures in the paintings in the Frick's exhibition are dressed in the most up-to-date outfits of the day.

The artist Suzanne Valadon (1865–1938), who modelled for the young woman waltzing in Dance in the City, one of the nine paintings in the exhibition, once reminisced that Renoir, who provided her with the fashionable outfit she wears in the painting, took her to a milliners so that he could indulge his passion for hats.

Today we take for granted, and enjoy, Impressionist paintings, which tend to be of rather modest size (since many were painted outdoors), light-filled, freely painted landscapes, often scenes of modern life, with an impromptu feel and a bright tonality and often a brisk, choppy brushstroke.  The critics and public of the day were not very keen on them, expecting much more 'finish'.    Painters such as Renoir, Claude Monet, Edgar Degas and Camille Pissaro were chief among these artists in their devotion to the immediacy of their paint and to their subject matter of French, and usually Parisian daily life.

Nonetheless, artists and their dealers have to pay the bills and they wanted to make and sell paintings that not only made a statement but also fetched good prices.  Big paintings can do that and Renoir wasn't averse to scale, indeed he liked to paint big and he liked to paint people (more so than, say, Monet).   All the paintings in this exhibition were chosen to illustrate his paintings of full-length figures, done on a grand scale between 1874, the year of the first Impressionist exhibition, and the early 1880s.  Although Renoir received portrait commissions, none of these are portraits as such, the titles being generic, as in La Parisienne, The Dancer, or La Promenade.

The exhibition's beautifully illustrated publication addresses each painting in great detail, beginning with a full description of the outfits worn by each person.  In the Frick's own painting, La Promenade, the two little girls in the foreground:

wear miniature blue-green paletots, possibly of cashmere, trimmed with either swansdown or white mink, with matching skirts and fur-trimmed silk tocques.  Delicate lace cuffs peek out from the sleeves of their jackets and their ruched underskirts are also trimmed with lace.  The girls are wearing white leather shoes and gaiters, and thick woolen stockings that wrinkle at the ankles....

This, as Colin Bailey points out, was Renoir's only picture set during the winter months and ‘the one that confirmed his aspirations as a painter of fashion, urban recreation and the beau monde’.

Indeed, by the early 1880s, Renoir was sending only portraiture for exhibition at the official Paris Salon and he sought commissions to paint the mothers and daughters of the wealthy with the help of well-placed friends and acquaintances such as Charles Ephrussi, whose history of art collecting and artist friendships have been chronicled recently in The Hare with Amber Eyes, by Edmund de Waal.  The 'big' paintings were put aside for exhibitions organized by Renoir's dealer.

Since the paintings in this exhibition are, strictly speaking, not portraits but make use of friends and acquaintances as models, there is much attention given in the publication to their identification.  For example, an aspiring actress of the day, Marie-Henriette Alphonsine Grossin, was the model for La Parisienne, while in the exuberant trio   Dance in the City, Dance in the Country and Dance at Bougival, are to be found, besides Suzanne Valadon, Renoir's close friend Paul Lhote and the artist’s mistress of three years, Aline Charigot.  In Colin Bailey's text, these three paintings, all from 1883, bring to an end Renoir's pictures of Parisians at leisure.

The text also covers the exhibition history and critical reception of each painting and traces their provenance to the collections where they reside today.  Henry Clay Frick (1849–1919) bought La Promenade in 1914, and it is comfortably at home today in a collection dominated by grand figure compositions by painters such as Rembrandt, Van Dyck, Hans Holbein the Younger, Ingres, Reynolds, Romney and Whistler.  It was the last Impressionist painting bought for the Frick Collection.

The publication that accompanies the exhibition is well written in jargon-free language. It is aimed at a fairly scholarly readership, but would also be enjoyed by people interested in 19th-century fashion.

Renoir, Impressionism, and Full-Length Painting is at the Frick Collection, New York unti 13 May 2012

Interested in the Impresssionists? See our review of books/exhibitions on Berthe Morisot  in Cassone September 2011; John Singer Sargent in Cassone December 2011; Degas in October 2011; Monet in May 2011.

Have you seen this catalogue? What do you think of the price and the content? Let us know!