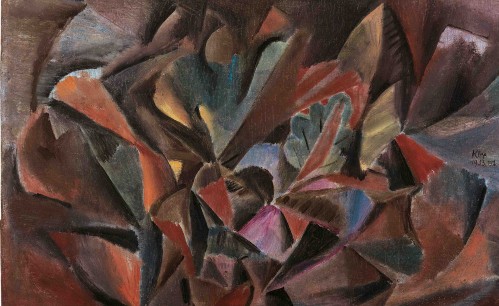 Paul Klee's art reflects a lifetime's work, painting a reality beyond the visible

Art does not reproduce the visible; rather, it makes visible.  (Paul Klee 1920)

The last major show of Paul Klee’s work in London was the 2002 exhibition at London’s Hayward Gallery, curated by artist Bridget Riley   and art historian Robert Kudielka. That was ‘Paul Klee: The Nature of Creation’, and it went a long way to restoring the artist’s image, which had become somewhat tarnished in the latter part of the 20th century. The new show at Tate Modern, ‘Paul Klee: Making Visible’, with around 40 more paintings than were shown at the Hayward, surely demonstrates that Klee (1879–1940) is back in favour.

The 130 works on show, out of around 9000 created by Klee over his lifetime, are spread through 16 rooms. Most of the pictures are very small and seem almost lost on the wide, high gallery walls on which they are displayed. The materials Klee used are often modest: paper and cardboard, burlap for the later rather larger works, watercolour, ink, pencil predominate rather than oil paint. As would be expected, he spent some years trying to find his own artistic ‘voice’ and the early works show the influence of Wassily Kandinsky  (1866–1944) and Picasso (1881–1973),  among others. Plants in the Mountains (1913), for instance, includes a shape that may be a tree or just a leaf, emerging from a strongly abstract pattern, rather in the way one sees representational images emerge from abstract elements in Kandinsky’s work. When God Considered the Creation of Plants, however, immediately shows a strong influence of Cubism.  Here one sees Klee working through his influences, finding his own mode of expression and  his own palette.

Klee wrote extensively about art – he was a teacher at the Bauhaus in the 1920s – and the wall panels that introduce each room are peppered with quotations from him. For Klee, what was visible in the world was not the artist’s primary subject. He believed that he had to paint a reality that lay beyond the visible. This led naturally to abstraction but also to the use of symbols and a striving to strip away anything that might detract from the reality beyond the visible that he was trying to capture. There are surreal elements in some works: Remembrance Sheet of a Conception has a Miro-like   quality, for instance. It was Klee who first described drawing as ‘taking a line for a walk’ – presumably to see where it would lead him.

Like many artists, Klee responded strongly to the colours of the environment around him, and his palette, initially quite dark, became noticeably brighter after a trip to Tunisia in 1914. Familiar Space (1915) and Translucencies Orange/Blue both create a sense of depth and space without using conventional perspective. Many years later, in 1929, a trip to Egypt again affected his subsequent art-making, as in the hot colours of Fire in the Evening (1929).

Although Klee never had to fight, the ward inevitably affected him and his work. Some of the Blue Rider group that had gathered around Kandinsky had to leave Germany (Kandinsky himself, a Russian national, being one of them. His fellow Blue Rider member, Franz Marc, died in action.) Klee (German-Swiss) was called up in 1916 but was given a desk job. A Mountain Summit (1917) features symbols of the sun, moon and stars, and a single cross that rises up from the mountain-like form at the foot of the painting, which inevitably one reads as the ‘foreground’. One inevitably feels that this cross relates to the many war graves resulting from the war, and the death of some of his own friends.

Once peace returned, he enthusiastically supported the new republican government of Germany. Ever ready to embrace the new, Klee developed some of his own techniques for creating art, including a means (the ‘oil-transfer’ method) of tracing his own drawings on to new surfaces where he could paint them. Once he began teaching at the Bauhaus  in 1921 he shared his techniques, as he developed them, with his students. One such was ‘gradation’, a method for creating a graded pattern of colour across a sheet of paper. His colours had now become more muted and symbols more abstracted than in the wartime work, as in Static-Dynamic Gradation (1923).

As the political situation changed for the worse, the Bauhaus was forced to move from Weimar to Dessau in 1925. Klee continued to work there until it was forced to close in 1933. Already receiving unwelcome attention from the Nazis – some of his paintings were included in the ‘Degenerate Art’ exhibition of 1937  – and suffering from the initial symptoms of the disease that was to kill him 7 years later, Klee took his family to Switzerland. He continued to work prolifically up until his death in 1940.

Throughout his career, Klee never rejected representation but continued to incorporate representational elements into his work. He worked in many different styles: Expressionism, Surrealism, Pointillism, as well as pure abstraction; some elements appear calligraphic. The works in this exhibition illustrate every stage of this prolific career, though they are only a tiny minority of all the work Klee produced. That they have been lent to Tate by public and private galleries from across Europe and the USA testifies to the wide appeal of the work and the respect in which the artist is held.