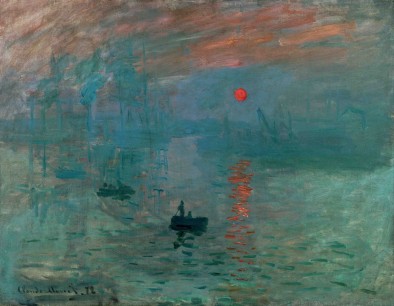 How to Read an Impressionist Painting by James H. Rubin

Monet once encapsulated his approach to art, in a fashion tailored for media brevity and simplicity, when he spoke to a Norwegian journalist and said that ‘the motif for me is a secondary thing’ and that ‘what I want to reproduce is what there is between the motif and me’. For Monet terms such as ‘reproduce’ and ‘motif’ are problematic and better replaced by ‘render’ or ‘subject’, but in any case the focus is on the relationship between himself and the world he is experiencing. There are many variables in this relationship, from time and season (involving light) to where Monet was standing and the shape and size of canvas he used in order to render best the aspect of this fluctuating experience which, at that moment, he wished to capture.

For Monet the activity of painting was to fuse the world of experience, and his own personal experience of that world, in the painting. Within studies of Impressionism, however, since the 1940s, there has been an unresolved tension not between the desiderata just mentioned but more misleadingly between a fetishized ‘painterliness’ (Monet as abstract expressionist) and a basically rather anecdotal social history of art that tells stories about the subject being represented, even though the paintings themselves are anti-anecdotal. This is sometimes reduced to terms such as ‘style’ and ‘content’, or the ‘how’ and ‘what’ of Impressionism. Hence the social history of art dominated art history in the 1970s and 1980s owing to the cultural historical vividness of its material. Thus the ‘how’ of Impressionism came to be corralled inside the ‘what’, as if the specific subject and what the artist felt about it determined how the paint was handled. Yet this ‘how’ seemed to go beyond each subject handled and to be more general, leaving unresolved problems in the methods of analysing Impressionism.

The title of James Rubin’s new book How to Read an Impressionist Painting raises such problems but never addresses them. What it does do is to offer a demonstration of contemporary approaches to Impressionist studies in a series of two-page spreads, each analysing a single work of art, with the benefit of comparative illustrations. As such, this lavishly illustrated and sizeable study of Impressionism makes for a good purchase or present for the art lover who might want to catch up with new thinking on favourite works.

The book keeps essentially to an Impressionism as defined by those in the exhibitions organized by the Impressionists themselves (excepting Degas’ followers), and is particularly good on the women Impressionists. It also reintroduces the almost forgotten artist Guillaumin, illustrating a dozen of his paintings of a grittily industrialized landscape. Thus the text draws strongly on feminist art history and the contributions of social art historians such as Robert Herbert and T. J. Clark. Indeed, Rubin’s own previous book Impressionism and the Modern Landscape (Berkeley, 2008) took a social-historical approach. The current book came out of student seminars at Stony Brook University, and we are told that most of the picture-choices and themes were based on those student papers, in order to keep in touch with younger currents of interest. Tabloid-like titles for each entry are snappy (‘Business as Usual’, ‘Economic Stimulus Plan’, ‘The Good and the Bad and the Ugly’) but the effect of this picture-by-picture structure is to make the book feel bitty in places.

That said, the pictures are organized into subject-dominated themes such as ‘City Life and Urban Views’, ‘Fashion and Entertainment’, ‘Industry and Technology’, ‘Promenades and Travel’, or ‘Sport and Outdoor Leisure’. Some paintings could go as easily into other sections (the ‘Fashion’  pictures could go under ‘Gender and Sexuality’, inevitably) and some texts lose focus on the theme of the section, but these are minor quibbles. The multiplication of categories such as ‘Predecessors and Innovators’ or the section on art historical ‘legacy’, together with the frequent references to ‘Japanese influence’ or the ‘debt’ to photography bring the text closer to more conventional surveys of Impressionism (including its problematic aspects, such as the idea that prints or photographs caused the development of Impressionism, or that Jackson Pollock   was ‘influenced’ by late Monet). This book will not quite offer an alternative to the conventional survey of Impressionism (with its various strengths and weaknesses) but it will provide for the interested art reader an extensive sampling of the sorts of cultural and social-historical approaches being applied to Impressionist pictures today, presented in short and highly manageable bite-size chapters.