Nevinson: from the trenches to the Jazz Age in prints 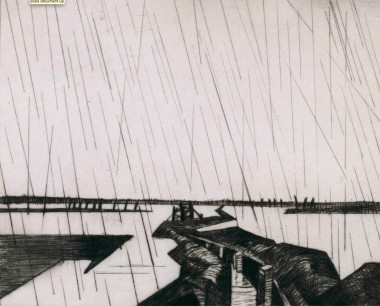 This book shows Nevinson’s prints to be a wide-ranging body of work of such unusual quality that a serious reassessment of his career is necessary, says Julian Freeman

Anyone familiar with the history of British art since 1900 will be aware of Nevinson, especially his place as the sole English representative of Futurism, and the magnetic qualities of his best-known work as a war artist – official or otherwise – during the Great War. Self-promotion was key to Nevinson’s parallel careers as artist, pundit and man about town, and to this day the complexities of his character continue to excite comment. Nonetheless, of the thousands of words that have been devoted to his activities, there has until now been no discrete analysis of each of his prints. In this beautifully bound and illustrated catalogue raisonné, Jonathan Black has now filled that gap.

One of the problems with Nevinson’s work is that, because of the compelling nature and range of his war paintings, his audiences have tended to stereotype him. It would be hard to ignore, and be unmoved by, the Futurist treatments of some of his early war paintings, such as La Mitrailleuse (1915, Tate), or The Doctor (1916), and many will be aware of Nevinson’s unhappy sojourn at the Slade School of Art from 1909–12. Yet whatever he failed to absorb there, Nevinson clearly made up for elsewhere. The 148 prints in Black’s catalogue are revelatory for two closely connected reasons. They demonstrate, first, that for Nevinson, printmaking was a sustained activity, a part of the whole of his work, and a factor not generally understood now. Then, taken as a whole, the prints are now shown to be a wide-ranging body of work of such unusual quality, even at their weakest, that a serious reassessment of his career is necessary, to supersede the last overall assessment, to which Black himself contributed (2000, IWM, London). No one can claim superlative status for Nevinson’s oeuvre, but the piecemeal reproduction and exhibition of his prints have skewed the picture, and this book does much to redress the balance.

The book is expensive, but will be of fundamental importance as a reference work for all serious collectors, connoisseurs and art libraries. It is very much a book about printmaking and, aside from the excellent illustrations in the catalogue raisonné itself, nearly all facing pages bear at least one illustration from the catalogue. Many of these images are agreeably close to their true sizes and are not crowded by the very readable type. The supporting text has four clear areas: an overview of Nevinson’s activity as a printmaker; the First World War prints, London and the countryside; his prints of ‘Jazz Age, New York; and finally Paris and France. There is a strong select bibliography, a chronology of key events in Nevinson’s life and career, and lists of all major exhibitions.

Black’s texts have to steer an often difficult path, not least because Nevinson’s own writing is so often arrogant, and characterized by sweeping statements, assertions and often grandiose claims. Nevertheless, Black provides sound contexts for the prints, and wherever possible chronicles their gestation, or offers informed guesswork, basing his views on impressive research. He has a hard job, simply because his subjects steal the show, but the essays are both balanced and informative.

As for the prints, they prove to be just as remarkable and varied as one might wish. Many readers will be familiar with the paintings from which many prints are derived but the book’s format makes that recognition a much more pleasurable, microscopic experience, not least because the enlargements of so many images offer many previously unseen, or unobserved insights. Nevinson’s drawing is much in evidence, as un-Sladey as might be expected, and his easy use of recognizably Vorticist   abstract motifs, together with his mark-making show off his adaptability, according to subject.

Many prints are famous, while others, less well known, are deserving of higher status, and others still, old familiars, contain surprises. The six images in ‘Britain’s Efforts and Ideals : Making Aircraft’ (1917) have been used in the run-up to this publication, and they are as compelling now as they were when London audiences first saw them. Closer to home are other pleasures, including Nevinson’s mezzotints of urban scenes and several drypoints of Sussex, and in the latter, especially, the hand is the hand of Nevinson, but the source might owe much to Frank Short. In this and other respects, Nevinson’s position as an artist worthy of inclusion in any British printmaking ‘hall of fame’ must be assured.

There is no ‘side’ in these works: they are all honest, whatever their merits, and Black’s survey also charts the peaks and some troughs of Nevinson’s creativity, as evidenced in the roller-coaster of his New York experiences, and in his responses to France. New York was good for (if not always to) Nevinson: the work is always ‘live’, and now is highly regarded by American scholars. As for ‘la Belle France’, the prints have their moments, but they have never been accorded the plaudits of the rest of Nevinson’s oeuvre, and with reason: too many are not quite ‘of the quality’.

Readers can come to their own conclusions, but this is an important book, as much for what is not said, as for the connections that it makes and prompts, for it is truly strange to be confronted by such a range of excellence, when it was always present and acknowledged by an earlier generation, yet largely set aside by later taste. If you cannot buy this, be aware of it. Perhaps in time the publishers might develop an online search facility to enable a wider audience to appreciate this extraordinary wealth of ability, and reassess Nevinson for themselves. He deserves it.

'Hanging a Rebel: The Life of CRW Nevinson

Julian Freeman comments that those readers who want a racier version of Nevinson’s life should look either to the man himself (Paint and Prejudice, 1937, Methuen) or to Michael J.K. Walsh’s C.R.W. Nevinson: This Cult of Violence, 2002, Yale.

Walsh's book is now out of print (it will be available from libraries). A later book by the same author is Hanging a Rebel: The Life of C.R.W. Nevinson.

For more on Nevinson and his associates see 'Critically brilliant: Six British artists' by Sarah Lawson in Cassone, August 2013.