Pop around the world 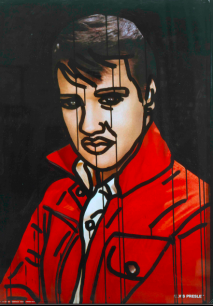 Peter Jones is engaged, baffled and amused by a thought-provoking exhibition at the Saatchi Gallery, London

‘Post Pop: East meets West’ at London’s Saatchi Gallery is an audacious and sprawling exhibition of Pop-inspired art from the last 40 years. By turns engaging, baffling, comic and thought provoking, it brings together over 250 works by more than 100 artists from America, Russia, China, Britain and Taiwan to illustrate the legacy of Pop in terms of a common concern with the everyday in all its forms. The show is supported by the Tsukanov Family Foundation, an educational charity and major patron of the Saatchi Gallery.

‘Post Pop’ is curated by art historian and critic Andrei Erofeev, well known for supporting controversial artists in Russia, the curator and collector Chang Tsong-Zung, and Marco Livingstone, an authority on American and British Pop. They have marshalled very diverse works around a number of themes such as Advertising and Consumerism, Celebrity and Mass Media, Religion and Ideology, and Sex and the Body, which are seen as representative of salient concerns and contexts of post-Pop art.

Aside from well-known artists such as Rachel Whiteread  and Gary Hume,   the Americans Cindy Sherman  and Jeff Koons,   and the bête noir of the Chinese authorities Ai Weiwei,   ‘Post Pop’ presents an opportunity to see lesser-known work, particularly from Russia and China.  Much of this exploits the imagery of communism and consumerism, as in Chinese ‘Political Pop’ such as Wang Guangyi’s paintings from the 1990s that combine heroic workers and the logos of global luxury brands.

From Soviet Russia, there is ‘Sots Art’ (from the Russian for ‘socialist’) that emerged in the late 1970s. It used parody to subvert the iconography of state-approved Socialist Realism, as in Komar and Melamid’s 1982 painting showing Stalin being visited by a semi-naked muse in classical-styled scenario. Although, later Sots-type art is hackneyed, as with Alexander Kosolapov’s trite sculpture from 2014 Hero, Leader God, with its troika of Lenin, Mickey Mouse and Jesus. This is also a problem with other work in the exhibition, such as the postcard collage of Marilyn Monroe by British artist David Hack.

Yet, for the initiated, there are clever, funny and intriguing works that make much of the British and American art look insipid. For instance, the wonderfully irreverent Kitchen Suprematizm (2005–6) by the provocative ‘Blue Noses’ group. They present photographs of the unappetizing Russian daily fare of black bread, greasy processed meat and cheese which have been cut into shapes that mimic the rarefied geometric abstraction of the early 20th-century avant-garde Suprematist painter Kazimir Malevich.

One work alone is worth visiting the show for; Gu Wenda’s United Nations – Man and Space (1999–2000). This slightly yucky but extraordinary installation, draped from the ceiling like cloth in a bazaar, comprises human hair from across the world worked into semi-translucent sheets featuring outlines of the flags of the countries represented at the United Nations. It suggests a common humanity bound by biology overriding national differences.

The exhibition’s lavish soft-back catalogue Post Pop: East meets West is beautifully illustrated, with each artwork given a single or double page colour spread. The essays by the curators throw light on differing contexts and meanings of the works. Andrei Erofeev charts the development of Sots Art, its anti-ideological intent and intractable character. Chang Tsong-Zung looks at Sino-post-Pop and the differences between art from mainline China, Hong Kong and Taiwan. Marco Livingstone elaborates on the exhibition’s themes and draws out the parallels with earlier British and American Pop. The catalogue is rounded off with thumbnail images and short biographies of the artists.

SEE the catalogue on AMAZON

See Peter Jones’ review of The Long March of Pop: Art, Music And Design 1930–1995 by Thomas Crow in this month’s Cassone.

See Alexander Adams’ review of Kitaj, also by Marco Livingstone, in Cassone, May 2011

'Post Pop: East Meets West' is at the Saatchi Gallery, London until 3 March 2015.