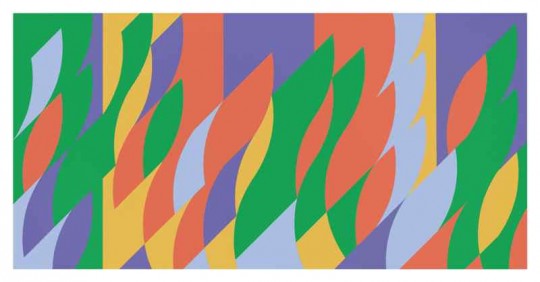 Bridget Riley’s current exhibition lives up to its stunning venue at Bexhill’s De La Warr Pavilion, where the artist herself introduced the show

Last year, Bridget Riley’s ‘stripe’ paintings were shown at David Zwirner’s gallery in London. Now it is the turn of her ‘curve’ paintings to be shown – this time at the De La Warr Pavilion in Bexhill.  From London, this is a bit of a hike but well worth it for both the show and the venue.

Riley’s early work in the 1960s featured curves but there was then a gap of 17 years while she concentrated on, first, the stripe paintings and then a series using rectangular forms. The earliest image shown is a study for Kiss from 1961 – a curved solid just touching (‘kissing’) a straight-edged solid form. After that, curves dominated her Op art work before giving way to stripes in the 1970s.

At the opening of the Bexhill exhibition, Riley commented ‘The curve is more open to amazing changes than the straight line…lines can be twisted into curves and curves can be used as contours of forms’ and ‘curves are so plastic and manipulable’. So, after the 17-year break, Riley returned to the curve with Lagoon 1 (1997) – its companion Lagoon 2 is on show here. In these works she was ‘struggling to get the curve back – no easy matter’.

Lagoon 2 features the rectangular shapes with which she had been working for some years but curves appear and disrupt the straight lines, setting up a series of contrasts across the surface of the work. The eye constantly refocuses, now on the curved forms, now on the straight lines. In this period, Riley – always attentive to the work of Cézanne, began to pay particular attention to Matisse, and to look at Cézanne’s work as though through the work of Matisse. So colour and form reinforce each other across her canvas. There are harmonies as well as contrasts.

Another work on show, Rêve (1999), has far fewer straight lines – the curve dominates, whether swooping sinuously from top to bottom of the large canvas, or outlining forms that force their way into solids of contrasting colour. The four colours used here – blue, green, yellow and cream – set up patterns of contrast and harmony.

There are no straight verticals in Rêve, but Riley returned to these in Painting with Verticals, a third version of which is on show here. A rhythm of straight and curved forms provides a sense of both flatness and volume as the eyes refocus on each component. There is an almost balletic feeling to the forms, which seem to drift gracefully across from left to right.

Long interested in drawing as a means of finding insights and developing her ideas, Riley has produced large numbers of preparatory drawings. A number are on show here, and really give an insight into the meticulous planning that has to precede the execution of these very large and imposing paintings.

While it is certainly true that the early 1960s works create very strong optical sensations of movement and – despite their monochrome execution – fugitive colour, movement is not lost in the later works. It is as though the very physical experience of the earlier works has become sublimated into more subtle evocations of movement. The works suggest rather than impose physical sensation. At the same time, they are much larger than the 1960s work and that, with the large areas of colour, creates a sense of enveloping presence that the smaller, older works achieved with the more dramatic optical effects that they engendered. It is really interesting to see the two kinds of work here together. It gives a sense of the trajectory of the artist’s work across five decades.

Indeed, Riley spoke of how an early work, Tremor (1962) had inspired her later wall paintings. She had felt when she produced Tremor that it contained a lot of potential for development but could not at the time see how she could fulfil this potential. Looking at it again in the 21st century, Riley was able to develop ideas latent in Tremor to create works such as Rajasthan (2012), which now belongs to the Staatsgalerie in Stuttgart but is temporarily recreated for this exhibition.

In Rajasthan, the white wall becomes part of the painting, creating straight edges across which the coloured, curved forms flow. It is as if the ‘static’ quality of the white reinforces the sense of movement of the coloured forms (Riley referred to ‘the march of the greens’), which seem to spill (or force their way) out of the painting at its ‘edges’.

These recent mural paintings are not Riley’s first. In the 1980s she was asked to paint murals in Liverpool hospital, as the enlightened administrators realized that art could have a mentally restorative effect on the sick. Riley was inspired by wall decoration in ancient Egyptian tombs, where there were clear delineations of skirting, dado and frieze levels. She needed to leave space on the upper walls for hospital notices and the like so this scheme worked at a practical as well as psychological level. Not only did hospital staff avoid using the available space for notices, but graffiti, which had previously been a problem, failed to appear.

Art has a humanizing effect in hospitals, which can seem very alien and forbidding, and this certainly proved true for Riley’s hospital murals. In 2014 Imperial College Healthcare Charity Art Collection commissioned another mural for St Mary’s Hospital in London.

Indeed, it could be said of all Riley’s work that it relates closely to us, our need for engagement with what we see. Riley said that she wanted her work both to attract the eye and ‘to reward’ the viewer for looking. Anyone going to Bexhill this summer will be well rewarded by the art on view.

A fully illustrated catalogue Bridget Riley: The Curve Paintings 1961–2014  has been published by Ridinghouse and the De La Warr Pavilion. 96pp. hardback.

For more on Bridget Riley in Cassone see:

‘Bridget Riley: The Curve Paintings’ is on now until 6 September at the De La Warr Pavilion, Bexhill on Sea, East Sussex. The Pavilion is a stunning 1930s Grade One listed modernist building on the seafront. It has an excellent cafe for lunch or afternoon tea. Trains run regularly from London from Charing Cross, Victoria and St Pancras International stations.

Admission to both exhibitions is free of charge.