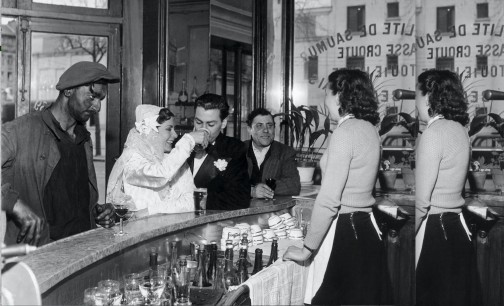 Robert Doisneau’s photograph Le baiser de l'hôtel de ville (The Kiss by the Hôtel de Ville) is one of the most famous and instantly recognizable photographs of the 20th century. This and other celebrated Doisneau images, many scarcely less familiar, continue to adorn posters, greetings cards, book jackets, album covers and countless other printed materials. Arguably more than any other photographer, Doisneau’s vision has come to represent the very soul of romantic Paris in the popular imagination.

Given the familiarity of his work in reproduction and the substantial number of books written about it and him, it was a tall order to produce a career-spanning volume that sheds new light on the man, his motivations and working methods. Happily this new addition to the Doisneau canon allows us just that, a fresh look at this most familiar of photographers.

A major factor in the success of this book is in the selection as its author; Jean Claude Gautrand, a lifelong friend of Doisneau’s, an experienced writer on the history of photography and a respected photographer in his own right. Preferring where possible to allow his subject’s own words to guide the reader, the self-effacing Gautrand’s own contributions invariably add real insight into the working methods of his subject, mixing his inside knowledge with deft and thoughtful analysis.

Allowed exclusive access to the resources of the photo archive of Atelier Robert Doisneau, the author eschews the temptation to devise a complex system of organization for the material, opting instead for a straightforward chronological approach. Given the scale of the project and the monumental output of its subject, this is both sensible... and something of a relief for the reader.

Unsurprisingly, Doisneau’s early work reveals a young man finding his way both technically and aesthetically. His earliest attempts at image making are almost exclusively studies of shop fronts and street furniture. This was to a large degree motivated mostly by his innate shyness. Once he overcame his timidity and started taking pictures of folk rather than things, his characteristic empathetic style began to emerge.

Extensive sections of the book cover, in informative detail and carefully chosen imagery, Doisneau’s ascent to professional maturity and success. These include his important work documenting Paris under Nazi occupation and the subsequent uprising led by the Resistance.

The immediate post-war period found Doisneau rapidly becoming established in a flourishing commercial career in fashion and advertising, but however much in demand he became he could never resist the lure of the streets in his beloved Paris.

Thus during the late 1940s and through the 1950s Doisneau became a leading figure in what was to become known as humanist photography, an important international movement whose primary interest and focus was, and indeed is, a celebration of the human spirit, the fleeting events and simple pleasures of everyday life. This development was perfectly suited to Doisneau’s character and interests.  Other leading practitioners in Paris included Brassai,  Willy Ronis and to a degree Henri Cartier-Bresson.

The theatre of day-to-day life in the city was for Doisneau a never-ending source of inspiration. ‘One of the greatest joys of my career has been to see and speak to people I don’t know. Very often these simple people are the sweetest souls and generate an atmosphere of poetry all by themselves’, he once said. ‘I took a mischievous pleasure in spotlighting society’s rejects, in both the people I took and my choice of backgrounds’.

What marks out a classic Doisneau image is not technical skill, which he had in abundance, nor his in-depth knowledge of his terrain. These were important contributory factors of course, but what ultimately determines the impact and retaining power of his best photographs is how they convey his deep empathy and respect for all classes of people, captured in their natural environments. In addition there is his ability to invest the specific event with universal meaning.  A wedding party in a local cafe through the lens of Doisneau symbolizes social cohesion and the power of community, all achieved through the single frame narrative.

Doisneau called himself a ‘fisher’ of pictures, and the difference between his tendency to wait for the coalescing of circumstances compared with the actively seeking  ‘hunter’ style of a photographer such as Cartier-Bresson is well illustrated in images such as The Sidelong Glance,  Propping up the Arts and Close to the Right Answer, where the rewards of his patience are timelessly recorded.

Whilst he continued to work, Doisneau’s style of photography fell steadily out of fashion during in the 1960s and ’70s, replaced by a harder-hitting social realist school. The market changed in other ways too, with weekly picture magazines and papers declining in popularity and giving way to the fast-growing new medium of television.  Nonetheless, a revival of interest in the work of Doisneau and his fellow humanist photographers since the 1980s is recognition of thedocumentary importance of this work as well as of a late-20th-century resurgence of the aesthetic of nostalgia.

Undoubtedly Doisneau’s vision was a celebration of a world partly real and partly as he wanted it to be, but it also unique and moving. This magisterial volume showcases a timeless and fitting  tribute to one of photography’s greatest of the great.