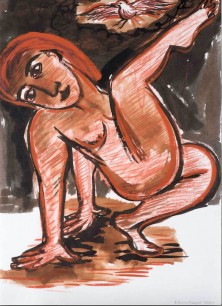 While Eileen Cooper's work is on show at London's Royal Academy, this book forms a timely celebration of her work

Eileen Cooper: Between the Lines by Martin Gayford and Sara Lee

‘My work primarily explores the Feminine’

A vibrant energy propels Eileen Cooper’s figures. Women  are seen stretching, leaping, rolling around or dancing, swinging like acrobats on a trapeze but always maintaining a (sometimes precarious) balance. Where men appear, they are more passive in their roles, as dance partners or lovers or just generally being useful.  There is an undoubted autobiographical element to her work as witnessed by the almost devotional images of a mother with new-born baby and later celebrations of young boyhood, for, as she says, ‘The second major decision in my life was to have children’ (the first, presumably, was to be an artist). Animals frequently present themselves as well:  more mythical than domestic – stags or fish but especially tigers.

All these characters spill over from the pages of this book that celebrates four decades of work  as painter, draughtsman and printmaker, published to coincide with her exhibition, ‘Hide & Seek: Drawings by Eileen Cooper’, on until 23 August at the Royal Academy, where she holds the post of Keeper of the Academy Schools.  An explosive fertility flows through the images of flowers and trees, and this, coupled with the usual nudity of the figures (although they could often be described as clothed in colour) suggests an allegorical reading of the works. But this would be a very open-ended reading, inviting the viewer to identify an individual meaning within the imagery.

Cooper acknowledges the power of myth and fable in influencing her work, recalling the impression made on her as a child by films and animations about Jason and the Argonauts or Sinbad.  Her account of childhood experience, escaping from the pressures of family life into the freedom of the imagination, will strike an accord with many.

In some cases, scenarios such as Thin Ice, a triptych from 1993, are dramatic in presentation and richly supplied with signs. Cooper rather resents the response, sometimes voiced, that the general tone of her work might be read as light-hearted or even ‘jolly’, pointing to the menace and vulnerability that actually underlies much of the imagery.  A graver tone is certainly struck by a group of charcoal and pastel drawings that responded to the death of her mother.

Recently, as the subjects have become a little more specific in location, such as the artist in her studio, the figures are more conventionally clothed but this is not to overlook a delicious set where the figure is ‘clothed’ in tattoos, reflecting her interest in Japanese art.

Cooper has always focused on printmaking in parallel with her painting practice, excursing through various techniques but working notably with woodcut and linocut. She talks about the special pleasures of uncertainty, compared with painting, of the results, the surprises of overprinting one colour on another and the pleasures of shared working with technical specialists. Indeed, her long-term collaborator, Sara Lee, adds her appreciative account in the book of Cooper’s approach and procedures in the print studio, providing valuable information on techniques, inks and papers.

Martin Gayford introduces the book as well as interviewing the artist, and, once he has got through a not entirely helpful digression on Gauguin,  gives a warm and insightful response to her work. He sees the ever-present tiger as a kind of personal emblem,  not necessarily aggressive but full of scarcely contained animal spirit and energy. Cooper’s prolific output, coalescing the forces of sexuality, fertility and nurture into the substance of creativity is beautifully communicated in the more than 300 colour reproductions contained in the book, which will do much to assert her importance in contemporary British art.

Eileen Cooper: Between the lines

‘Hide & Seek: Drawings by Eileen Cooper’ is on until 23 August at the Royal Academy, Burlington House, Piccadilly, London W1J 0BD