Ravilious: ‘an artist who happened to find himself caught up in a war’ 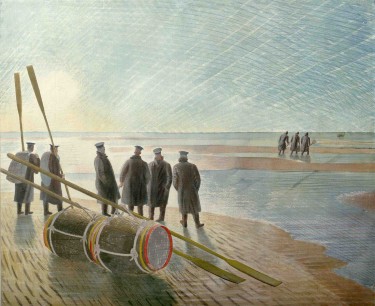 No exhibition focusing exclusively on  the watercolours of Eric Ravilious has been mounted since the artist’s own lifetime in 1939, and now the Dulwich Picture Gallery is holding this long overdue display in six rooms full of fascinating work, amply covered by James Russell’s sumptuous companion to the exhibition.

We’re right back in the 1930s and the early War years with these watercolours. For me, Ravilious (1903–42) is one of those artists who subtly change your way of seeing things when you leave the gallery and emerge into the sunlight, and what greater accolade is there than that?

There’s no mistaking the kinds of things that caught his eye: interesting old machines or derelict conveyances; evocative English landscape; coastal scenes; dawn light in any weather; any combination of the above. Unmistakeable too is a light-hearted slant on the subject or amusing juxtapositions.

If you are looking for portraits, you have come to the wrong place. If Ravilious drew a chair, it is unlikely (though not impossible) that anyone was sitting on it. One of the few exceptions here is his tempera picture of Edward Bawden Working in his Studio (1930). The studio is dominated by rolls of drafts for his murals at Morley College. They are piled on top of a curtain-covered structure in the corner and stacked in another corner like a miniature pipe organ. Bawden himself sits working on a recognizable painting of Clacton Pier. Bawden and Ravilious were close friends and they worked together on the murals for the Morley College  refectory, which were then destroyed in the Blitz.

One of my favourites is the picture on the cover of the catalogue: The Westbury Horse (1939) on its chalk hillside with, in the distance, a tiny train representing modern times in contrast to the timeless quality of the chalk figures of England. Another juxtaposition of the Westbury Horse and a train is Train Landscape (1940), where the Horse is seen from inside the train carriage. Ravilious was also intrigued by the two human chalk figures, The Cerne Abbas Giant and the Long Man of Wilmington in Dorset and East Sussex respectively, and they both appear in his pictures and the murals for Morley College.

Tea at Furlongs (1939) shows a modest tea table set out of doors at Furlongs, the country cottage in East Sussex where Ravilious sometimes stayed. It is plainly not a grand occasion – the chairs don’t match, the crockery is nothing special, and the garden umbrella has seen better days. Like so many of his pictures, although no one is present you sense people about to come on the scene. Have the occupants of the two chairs left suddenly? Are they about to come and sit down? Is someone fetching the hot scones while the other finds the tea strainer?

Some interiors have the same sense of people hovering nearby but not quite in the frame. In his series of greenhouse pictures someone has certainly been busy recently cultivating all the geraniums and tomatoes. In Interior at Furlongs (1939) there is a chair under a window and to the left an open door that seems slightly mismatched with the door frame. As in some other pictures, the shadows don’t accord with the light source. It all leaves the spectator somehow wrong-footed. The perspective in all these pictures is always carefully a bit out of kilter.

The outdoor scenes are often in an early morning light. As James Russell remarks, ‘Dawn was the artist’s preferred time for outdoor work, and in many watercolours it is the radiant early morning light that seems his true subject’.

His treatment of large areas is very recognizable: a kind of cross-hatching that can result in a vaguely ‘plaid’ sky arching over similarly plaid hills and fields.

Ravilious was pleased to be asked to be a war artist. He didn’t undergo a personality change just because he was now dealing with artillery and fighting men. The same shapes and compositions attracted him in 1940 as had intrigued him in 1935. As Russell says, Ravilious was ‘less a war artist than an artist who happened to find himself caught up in a war’. As before, he depicted machinery and sunlight and expressed the sense of a moment in time captured in paint. He drew operations rooms, planes, ships, and coastal defences with the same flair previously used on civilian scenes. First with the Royal Navy, he transferred to the RAF, where he flew in planes and discovered a whole new set of perspectives and angles to play with.

A very striking picture is his Ship’s Screw on a Railway Truck (1940) painted at the Chatham dockyard and now lent by the Ashmolean Museum. The screw, seen in the winter against a snowy background, seems to be made of bronze if not actually gold. It glows yellow and its surfaces look like part of a Möbius strip with their smooth curves and planes making surfaces that catch the pale light in every possible way. Complementing the swirling curves of the screw are dark tyre-tracks in the snow, which similarly describe graceful arcs in the background. As you would expect with Ravilious, not only the ship’s screw but also the railway truck is meticulously observed, looking almost toy-like under the massive screw.

A pre-war fascination with fireworks, seen in his picture of Bonfire Night, November 5th (1933) with its Catherine wheels and bright explosions lighting up the night sky, finds its outlet when Ravilious the war artist depicts HMS Ark Royal in Action (1940) or Firing a 9.2 Gun (1941). The latter shows a piece of artillery spewing a large plume of fire, but the Ark Royal picture is striking for its contrast of vivid white and yellow firing at night with reflections like hail in the night sky and stripes on the black sea.

Posted to Iceland in 1942, Ravilious volunteered to go on an air-sea rescue mission which never returned. He was missing, presumed dead, at only 39. Looking at these pictures with their adventurous experimentation and keen capturing of the moment, with a quality of light that transports you to the Wiltshire or Chatham of 75 years ago, it is impossible not to wonder what later work Eric Ravilious might have produced.

‘Eric Ravilious’ is at the Dulwich Picture Gallery until 31 August 2015. Some of his work can be seen at the Fry Art Gallery, Saffron Walden, Essex.