Bridget Riley goes back to the future 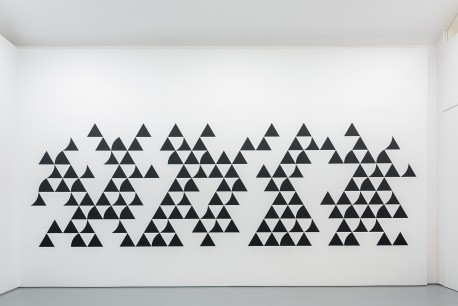 Bridget Riley has shown work in both England and France this year. For those who could not get to Paris, this lovely catalogue gives a taste of what she showed there

Bridget Riley has gone back to the future. In the 1960s her black and white paintings, dubbed ‘Op art’ by the press, seemed futuristic, combining as they did a precision and dynamism that were both appropriate to the ‘space age’. From the late 1960s Riley produced increasingly colourful paintings in which the dynamics became more subtle, producing a gentler sense of movement and power.

In the last few years she has again been working in black and white, but as French scholar Eric de Chassey points out in this catalogue, which accompanied an exhibition is Paris in summer 2015, this is not some nostalgic revisiting of pasture familiar. For Riley, the path is only ever forwards. In the 1960s, the works were relatively small – now they often cover entire walls, increasing the sense that one is standing in the painting’s space, rather than that it is in one’s own space. In the ‘Quiver’ series, numerous black triangle-based shapes flow across walls but the white spaces between them also have triangle-related shapes. Quiver 2 puts me in mind of birds in flight – as de Chassey writes:

a cloud of large white triangles is created optically by a succession of smaller black shapes made from the combination of two circular segments, which recall a pair of wings

In Quiver 3, the black shapes themselves form pyramids with inverted white pyramids punctuating the structure. Looking at these paintings, the eye constantly refocuses. De Chassey writes ‘Both Quiver 1 and Quiver 2 emphasise the interplay of active and passive shapes’. That interplay takes place as much on the viewer’s retina, and in the viewer’s head, as it does on the wall. Riley has certainly drawn from her past here – de Chassey mentions Tremor (1962) and Hidden Squares (1961) as distant progenitors or sources of inspiration for these works. Yet she has transformed these origins into works of greater ambition, which ‘take stock of every painting experience Riley has created during a long career’. Indeed, Tremor was  among the sources for recent colour paintings shown at the de la Warr Pavilion  in summer 2015.

This catalogue, along with that for ‘The Curve Paintings’ (the de la Warr exhibition), brings us up to date with Riley’s oeuvre but she is so productive that one feels it will soon be overtaken by new work.

Bridget Riley  with essay by Eric de Chassey (in English and French) is published by Galerie Max Hetzler, Berlin/Paris, and Holzwarth Publications, 2015. 40pp. with one fold-out, fully illustrated in colour and black & white, (hbk). ISBN 978-3-935567-81-7