A new look at the work of William Rothenstein 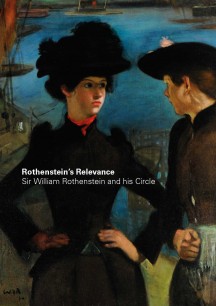 In partnership with Cartwright Hall, Bradford Museums and Galleries, Ben Uri Gallery and Museum is hosting ‘Rothenstein’s Relevance’, examining the work of Sir William Rothenstein (1872–1945) and his circle. It will be Ben Uri’s first exhibition on this hugely influential figure and is a partial tour of the Bradford exhibition, ‘From Bradford to Benares: the art of Sir William Rothenstein’, which ran earlier this year, reconfigured for its London showing. It comprises approximately 40 works including paintings, works on paper and archival material, and aims to re-examine the significance, influence and continuing importance of Rothenstein’s artistic achievements.

The exhibition will examine major themes from Rothenstein’s career including Jewish subjects, portraiture and figure studies (in Paris, London and Gloucestershire), as well as Rothenstein’s role as Official War Artist in both the First and Second World Wars. These will be shown alongside work on similar themes by a number of mostly younger contemporaries including Barnett Freedman, Mark Gertler, Eric Kennington, Jacob Kramer, Albert Rutherston and Alfred Wolmark, who were all either influenced directly by or worked alongside Rothenstein.

The exhibition opens with five of Rothenstein’s major paintings on Jewish ritual observed in Whitechapel between 1903 and 1908 including Jews Mourning in a Synagogue, 1906 (Tate), hailed as ‘far and away the most impressive and most important’ of these when first shown at the New English Art club in summer 1906. Also included within the 1906 Jewish Art exhibition at the Whitechapel Art Gallery, it was subsequently presented to Tate by Jacob Moser in commemoration of this show. It will be paired with Kramer’s stark modernist interpretation of Jewish ritual, The Day of Atonement (1919, Leeds City Gallery) – the preparatory drawing for which, from Ben Uri’s own collection, will be shown concurrently in the centenary exhibition, ‘Out of Chaos’ at Somerset House East Wing (to be reviewed in September’s Cassone). Similarly, Rothenstein’s Reading from the Book of Esther (1907, Manchester), which directly inspired Gertler’s Talmudic Discussion (1911, private collection), will be paired directly with this work for the first time. As an adviser to the Jewish Educational Aid Society, Rothenstein’s support was vital in the early careers of both artists. Alfred Wolmark’s In the Synagogue (1906, Ben Uri Collection) will also be shown in this section in support of his later claim that the two artists had worked together in the East End on Jewish themes.

Further highlights of the exhibition include Rothenstein’s Coster Girls, c.1894 (Sheffield), which invited the comment when shown in 1894 at the New English Art Club that ‘Many are the painters more agreeable than Mr. Rothenstein; but it is scarcely possible to be more clever than he’. Rothenstein’s work will be flanked by two later interpretations of this motif: Coster Girl (1907, Arts Council) by his younger brother, Albert Rutherston and Gertler’s The Coster Woman (1923, Private Collection).

Rothenstein’s role as an Official War Artist in both the First and Second World wars, including three of his dramatic Bourlon landscapes, will also be shown alongside works by his younger friends and contemporaries Eric Kennington and Barnett Freedman.

‘Rothenstein’s Relevance’ will run alongside Ben Uri’s centenary exhibition ‘Out of Chaos’ at the Inigo Rooms, Somerset House East Wing (on until 13 December 2015).