Ground-breaking show of Arab art in London this autumn 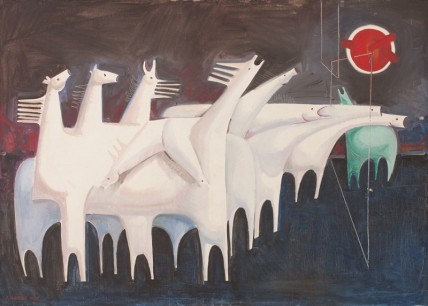 The Whitechapel Gallery is presenting the largest single, historical presentation of Arab art in the UK this autumn.

Continuing the Whitechapel Gallery’s programme opening up rarely seen art collections for everyone, a series of four chronological displays launching this September highlights works from the Barjeel Art Foundation’s rich collection. Artists from Algeria, Egypt, Iraq, Lebanon, Palestine and elsewhere in the region tell the story of Arab art from the modern to the contemporary period.

The Barjeel Art Foundation is based in the UAE and was founded by Sultan Sooud Al-Qassemi in 2010. It holds one of the most extensive collections of art from the region, dating from the 1900s to the present day. This series of exhibitions at the Whitechapel Gallery features over 60 artists and 100 works of art from the collection, and explores four different themes, which examine ways of defining Arab art from its early modernist beginnings and geographies.

On show from September 2015 and continuing to December 2016, the exhibition is in four parts, with the first going on show on 8 September.

Barjeel Art Foundation collection: Part 1,  8 September  – 6 December 2015
This first display of works explores the emergence and subsequent development of an Arab art aesthetic through drawings and paintings from the early 20th century to 1967, an important historical period in the region. Display highlights include a portrait painting of a young woman in profile by Armenian-Egyptian artist Ervand Demirdjian titled Nubian Girl, which is believed to be one of the earliest works in the collection, made between 1900 and 1910.

An early career painting by Dia Azzawi, recognized as one of Iraq’s most influential living artists, is also on show alongside Kadhim Hayder’s painting of symbolic white horses titled Fatigued Ten Horses Converse with Nothing (The Martyrs Epic) (1965).

The display ends with Hamed Ewais’s Le Guardien de la vie (1967-8), a large-scale oil painting that depicts a fighter, weapon in hand, while underneath him everyday events such as a wedding taking place and a child riding a bike are shown, suggesting the possibility of societal renewal following the collapse of the Pan-Arab ideal after the Six-Day War in 1967.

Another three parts of the exhibition will run successively  through the winter and throughout 2016.

For more on Arab art, read

'The sorrow and the beauty of Arab women'

'Hopes and aspirations shine brightly in the Middle East

'Ahmed Alsoudani at Haunch of Venison'