The art of the sacred – in a contemporary spirit 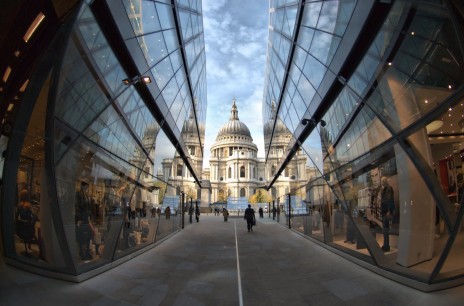 Jenny Kingsley talks with Canon Mark Oakley, the new keeper of the works at St Paul's

When Canon Mark Oakley was priest-in-charge at Grosvenor Chapel, seats in the pews, especially those in front, could have been auctioned profitably to raise money for gilded restoration. People loved his sermons; they were imbued with wisdom and humour – poetry, stories, jokes and quotes, including bizarre magazine headlines: ‘Boiled alive on a mini break: terror in the steam room’. Sometimes what he said in a serious context was surprising for its forthrightness; the clergy have an oft-criticized reputation for sitting on the fence. ‘The God that atheists reject,’ he once preached, ‘is an unpleasant, all powerful, vengeful, biblical fundamentalist… a God around in some pulpits, let’s be frank.’

I missed Mark and his sermons when he left the Chapel to become Treasurer at St Paul’s Cathedral – the person responsible for the fabric and collections – the treasures – as well as for developing the cathedral’s visual arts programme. As I’d been feeling slightly ambivalent about some of the contemporary art exhibited in the past, on a temporary basis, at St Paul’s, I was curious to explore an insider’s perspective. Not all of it revealed immediately identifiable Christian themes and symbols – was this appropriate in a cathedral setting?

I recall Bill Viola’s video The Messenger, exhibited in 2004 on a large screen.  The film featured a naked man submerged in water but slowly rising to the surface, opening his eyes and breathing. Indeed, Viola’s use of the primal image of water is prominent in most religious traditions, not only Christianity.

Moon Mirror by German installation artist Rebecca Horn was exhibited in 2005. This was a revolving mirror set within a static mirror with a moon ‘in flames’ suspended above from the cathedral’s ceiling. The sculpture was meant to make the viewer feel as if she was looking from the depths of the earth to the heavens above – suggesting a quasi-religious experience.

Yoko Ono exhibited three works in 2006: Morning Beam entailed a hundred pieces of nylon rope extending from the floor to a cathedral window; Cleaning Piece was a carpet of river stones; Wish Tree held tags for viewers to write their wishes upon. Ms Ono said that she saw her work as inspiring meditation and self-healing.

When in 2008 St Paul’s hosted the project The Question Mark Inside, the church became literally a literary light. Artist Martin Firrell projected onto the dome bloggers’ one word responses to the question ‘what are the things that make modern life meaningful and what does St Paul’s mean in that contemporary context?’ ‘Happiness, serenity, justice (in Arabic) light, breasts…’ were some of the projections. The artist also projected his ideas and those of other known thinkers, such as A.C. Grayling, onto the walls of the Whispering Gallery and the cathedral’s west front: ‘All men are dangerous…a pontoon ride on the Mississippi River…the air itself is laughing with us…opposition is the foundation of liberty…’.

In February 2010, Antony Gormley’s Flare II was suspended in the stupendous Geometric Staircase of St Paul’s. The sculpture is a mesh of grouped, stainless steel wires attached to a human form or perhaps a dove.

Later that year, Mark Alexander’s two red silkscreens, both entitled Red Mannheim, were displayed either side of the nave. Alexander was inspired by the Mannheim Cathedral altarpiece in relief  (1739–41) by Paul Egell, which was damaged by bombing during the Second World War. The original sculpture depicted the Crucifixion with the freestanding figures of St Sebastian and St Rock in front, and in the foreground an altar in the form of a sarcophagus with two worshipping angels.

Alexander’s works showed the shadow-marked wall space where the main altarpiece once hung; the crucifix is an impression and the Virgin Mary and Mary Magdalene are dark silhouettes. St Paul’s suggests there’s a ‘symbolic parallel between the history of St Paul’s as a bastion of British defiance during the Blitz, and Alexander’s resurrection of a bombed and blasted icon’.

In 2011, the Geometric Staircase was once again the setting for an intriguing work of art. Architect John Pawson collaborated with crystal experts Swarovski to create a concave crystal crescent resting on a larger reflective hemisphere. The creation was placed at the bottom of the Staircase while a spherical convex mirror was suspended 23 metres above in one tower’s cupola. The reflections heightened my sense of space, light, spirituality – a resonance one experiences when looking at Gormley’s Flare II.

On Remembrance Day last year, St Paul’s featured art reflecting a horrific human rights issue: child soldiers. At the base of the Whispering Gallery, Ted Harrison used 5000 poppies to create an image of three child soldiers. At ground level it appeared as though the poppies had been scattered randomly. But when seen from a sacred height, the image is clarified, the message all the more powerful.

To meet with Mark, I venture to Amen Corner, an enchanting leafy row of Georgian houses, not far from the Cathedral, where the Dean and Chapter reside. We sit in his traditionally furnished drawing room and talk about what’s concerning me. Mark immediately acknowledges that not only are there ever-fewer Christian adherents but also increasing numbers who lack any sense of spirituality and question the value of religion.

‘St Paul’s is a national and religious trust. Yes, we want to engage people in Christianity, but we don’t want a church in aspic. We can’t assume people will understand what they’re looking at, and reach them in a traditional context.’ Mark hopes that without first encountering doctrinal messages, when viewing the cathedral and the artwork, people will ultimately be moved to seek the knowledge of God, and ‘enter the story’. ‘A collage of forces should resonate – music, space, prayer, liturgy.’

Perhaps the key for engaging people in Christianity is through the physicality of the cathedral, suggests Mark. Sometimes we’re more aroused by what we see than what we hear and read.  Art created for display in a specific place within St Paul’s, of a scale appropriate to its immense setting, could inspire visitors to appreciate their surroundings – the cathedral’s awesome beauty, history, purpose and relevance to their lives. They’ll look beyond themselves towards a spiritual realm and think about how they themselves fit within this realm, finding a personal connection.

Mark admits that contemporary art can ‘be difficult and unsettling’; challenging one to look again, reconsider those first impressions, perceptions and prejudices. He doesn’t see what’s aesthetically progressive as inhibiting: ‘Things of worth have a complexity and depth which require patience to understand’. They encourage conversation, fresh approaches to life. ‘Jesus challenged people’s perceptions’, he reminds me.

It is interesting to note the intellectual strands informing both Viola and Gormley. Both men exhibit, in religious settings, work that embraces universal themes and can be difficult to interpret. Viola was raised as an Episcopalian and has studied the teachings of Zen masters and Sufi mystics.  Gormley is a lapsed Catholic; he attended a Benedictine boarding school. Afterwards he read social anthropology and art history at Cambridge and spent two years ‘studying’ with a Buddhist meditation teacher. Graham Howes in his book The Art of the Sacred recalls a conversation between E.H. Gombrich and Gormley in which Gormley says: ‘religion tries to deal with big questions, and I hope my art tries to deal with big questions like “who are we”, “where are we going?”’

Indeed, Bill Viola is in the midst of creating a permanent exhibit for St Paul’s –  two permanent multi-screen installations evoking the themes of Mary and the martyrs and spirituality in a broad sense.  The ‘silent’ screens will be placed at the east end of St Paul’s, behind the High Altar, on either side of the American Memorial Chapel, and mounted on hinged panels so they can be switched off and hidden during services. ‘Mary makes us think of womankind, motherhood, experiencing the seasons of life, human journeying. Martyrdom inspires us to think about mistreatment, torture, what we might be willing to die for, uncomfortable quests’, emphasizes Mark. There will be scenes in contemporary settings, such as industrial areas with homeless people in downtown L.A.

Mark explains that work is chosen by way of a continuous conversation between people within the community of St Paul’s – the Dean and Chapter – and people involved in the art world, such as the Director of the National Gallery, curators, conservationists, and academics, about what’s appropriate for the Cathedral. I suspect though that St Paul’s nurtures a much more open mind that what is prescribed in the slightly dogmatic thrust of its arts policy. The Cathedral’s proposals are subject to a recently issued guide for parishes and artists from the Church of England regarding display and commissioning. Procedures can be extremely bureaucratic.

After I’ve said goodbye to Mark, I wonder if one visit could spark a sense of the numinous, encourage religious conversion? Have some exhibits been chosen because they are ‘difficult’, abstract, lacking an obvious religious narrative? Is the church sitting on the fence, afraid to share the story for fear of offending with a possibly alienating message? I imagine a vibrant oil painting next to the High Altar: a dark skinned Mary and a light skinned Joseph are dressed in T-shirts and jeans, holding hands while crossing a busy street.

BUY The Art of the Sacred by Graham Howes FROM AMAZON

There have been religious artefacts and churches on the site of St Paul’s since Roman times. The present cathedral, renowned for its Baroque splendour, was designed by Sir Christopher Wren and built between 1675 and 1711. The meeting of the nave (main body of the church – the word means ‘ship’, symbolising the journey through life), transepts (transverse arms), and chancel (eastern aisles, where the choir sit) is circular with an inner domed area above, which features murals by Sir James Thornhill (1675–1734) based on the life of St Paul. What we see today are reproductions that were repainted in 1853. In the triangular spaces between the arches of the dome are mosaics depicting Old Testament prophets by the artists Alfred Stevens (1823–1906) and George Frederic Watts (1817–1904). The outer dome is what one sees on the skyline. In between the domes is a brick cone, supporting the stone lantern. There are several chapels distinguished by differing ornamentation.  For a stunning view, climb the 257 steps to the Whispering Gallery where whispers echo around the dome.  The Geometric Staircase is a spiral of 92 steps leading to the library. Look out for the many memorials to famous people, such as John Donne, Joshua Reynolds, J.M.W. Turner, and John Everett Millais.

Don’t miss the two widely celebrated modern works of art with strong Christian themes on permanent display, in the North Transept and Quire Aisle: the sculpture Mother and Child: Hood (1983) by Henry Moore, which we’re encouraged to touch, and the painting The Light of the World (1851 – 54) by William Holman Hunt. This depicts Christ, standing in the moonlight, holding a lantern, illuminating ‘the promise’ – as Graham Howes suggests – ‘of a new day, a new life once the soul awakens to Christ’. Howes suggests that the painting was Hunt’s response to a census revealing that religious practice and belief of a Christian nature were on the wane. Hunt was deeply religious.

Amanda Hogg, Interview with Canon Bill Hall  for an audio guide for visitors to the exhibition of The Messenger at the Fruitmarket Gallery, Edinburgh, 1997.

Graham Howes, The Art of the Sacred, New York, I.B. Tauris and Co. 2007.   (This ‘academic’ book, surprisingly lacking in jargon, considers the theoretical as well as historic and contemporary experiences.)