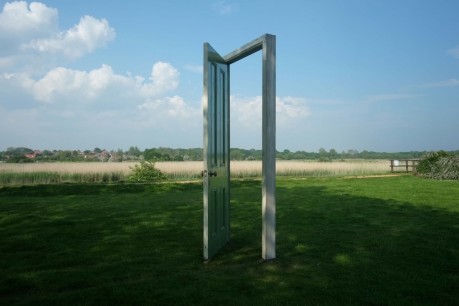 Gavin Turk, an art-rich 400-page monograph of the British artist’s work, features 450 illustrations from Mirror, 1988,to Transit Compression, 2012. The book is a 25-year retrospective put together under the artist’s direction, which gives the reader a kind of one-to-one dialogue with Turk through his choice of content, images, design and layout. Publication coincides with related events, including an exhibition, ‘Gavin Turk: The Years’, at Ben Brown Fine Arts, London (until 14 June, 2013).

Gavin Turk (born Guildford, 1967), is an interesting man. Whilst his work in print, painting, sculpture and film often forms a parody of self-promotion, constantly questioning artistic authenticity and identity, he is not an artist who appears much in the public eye. One gets the impression this is because he likes it that way. He does not seek to create news about himself: his interest lies in his art practice.

Histories of Turk’s early career tell the story of his 1991 failed MA degree show at the Royal College of Art, Kensington, London. In an empty studio space painted white, he placed high on one wall his artwork Cave, 1991, a circular blue English Heritage-style plaque. On it, beneath the words ‘Borough of Kensington’, it said ‘GAVIN TURK/ Sculptor/ worked here 1989–1991’. The room featured no other works by him. The RCA refused to accept it for his MA to complete the degree. Now, years later, the RCA is proud to count Turk as one of its former students – though not of its graduates, as  it still hangs on to his degree. Yet the college asked his permission to include the plaque in their 150th anniversary show in 2012. Turk showed his generosity of spirit by allowing them to include it. He hardly needs their MA-status recognition, his body of work since that show highlights his gift for re-thinking, re-engagement, and re-use of art and objects. Cave, 1991, was the notable start, noted too by art collector Charles Saatchi, who bought it, the first work of Turk’s to sell.

The book’s illustrations allow a close examination of signature pieces, for example Pop, 1993, a life-size waxwork self-portrait of Turk posed as Sid Vicious imitating Elvis in the style of Warhol – Saatchi bought that too. It includes Turk’s ‘Jackson Pollock’ drip paintings series such as Wiggle Waggle, 2009, Ascension, 2009 and Nubians of Plutonia, 2009, created by repeating his own signature thousands of times. And we experience Turk as Andy Warhol, or Joseph Beuys or Che Guevara. These ‘homages’ or re-use of originals may invite the question ‘why?’. They bring into question the notions of authorship, authenticity and identity of the artist, where a signature can add commercial value.

This monograph takes the reader from his early works in the late 1980s, before Turk’s name came to be associated with the generation of ‘Young British Artists’ (yBas) in the 1990s, up to the present day. Unlike many monographs crammed with artist appraisals this book contains only two essays: one, ‘Doors of Perception’, by Judith Collins, an international authority on sculpture, and the second ‘Sick Transit Gloria Monday’, by Iain Sinclair, a British writer and filmmaker.

The essays, placed at the beginning and end of the book, are quite different in content. Collins’ text is the opener; she enlightens the reader on Turk’s interest in art history and philosophy and discusses works that highlight Turk’s methodology of approach. His ability to make the viewer/spectator re-think what he/she is viewing is evident in the use of painted bronze to question ‘iconic status’ and the value of material objects. It is striking in the series Bag (12), 2001, a re-use of the ubiquitous black bin bag, full and tied up, awaiting collection, a common site on city streets; and the poignant Nomad, 2003, in painted bronze, a sleeping bag with the abstract form of a homeless person within, body shape seen but person unseen. It is an uncomfortable reminder of the poorer members of society, quickly passed by and yet, created in an expensive medium, it changes perception. Collins reminds us that much of Turk’s work is also humorous. His RCA submission proved that, and we see it over and again, such as in Self-Portrait (Fountain), 2012, a self-deprecating sculpture alluding to his fame.

Iain Sinclair’s essay is written  as a snapshot of Turk’s infinite capacity to re-think the everyday. He concentrates attention on Turk’s sculpture Transit Compression, 2012, created from a white transit van. We follow it as it is emptied, taken to the car crushers and reduced to a squarish, oblong piece of heavy metal. Sinclair follows the process from van to crushed metal in six text panels, mirroring the panels of the van. It is a humorous ride with the artist and Sinclair, and written like frames from a film, where the reader is transported to Turk’s east London studio to watch a signature Turk work of art end a stunning monograph.

Also, use our ‘Search’ facility (towards top right of screen) to search for:   yBas