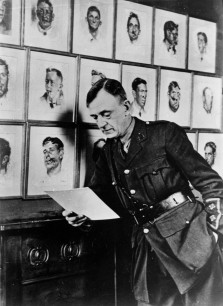 With the work of some of his pupils currently on show in Dulwich, Henry Tonks is due for some serious interest, as Julian Freeman explains

Was Henry Tonks ever in vogue as an artist? His biographer Joseph Hone shakes his head at Tonks’ irresolute approach to completing a canvas, and his inability to call it a day, yet his stature as a draughtsman and as a teacher at the Slade was a wholly different matter: he was the king-pin, with bags of integrity, a fundamental characteristic impossible to diminish, however one wants to read him. And read him one does, for Tonks is an inescapable figure in the history of British art, and he is clearly making a well-deserved return. Certainly, no one who passed through the Slade from his arrival in 1892 to his departure in 1930 could fail to have been marked by the experience of contact with him.

Nonetheless, to read the derogatory accounts of some of his students, and the assessments of later voyagers through the jungles of the Slade School, it is sometimes hard to see him in perspective. In the years immediately after 1945 the rear-view mirror of modern British art rarely flattered Tonks, partly, perhaps, because that mirror was adjusted by those whose work he mistrusted. It’s easy to see why. The older man clearly understood the limitations of C.R.W. Nevinson (1889–1946) and did not appreciate Paul Nash’s student work. Nevinson reviled him in his Paint and Prejudice (1937); in Outline (1946) Nash (1889–1946) portrays Tonks very much as a reminiscence, as anachronistic: a fogey. It wasn’t true. Modernism found no favour with Tonks, and Paul Nash, musing on his own past, forgot to note that Tonks was enormously supportive to such odd, left-field figures as Stanley Spencer (1891–1959), and to such genuine, classless talents as Rex Whistler (1905–44). Nor was Nash present to witness the day when Tonks finally departed from the Slade in 1930, when, according to William Townsend, the students cheered the old man ‘to the echo’.

Tonks resurfaced in 2013 at the Charleston Festival, by design and by inference, through the promotion of new, or new-ish, books, and through publicity for an exhibition. Tonks himself might have been bemused by such untoward links between Charleston, Bloomsbury, and the art critic Clive Bell (1881–1964), whom Tonks held in scant regard. So why the sudden interest?

Between April 1916 and November 1917, during war service in the Royal Army Medical Corps, Tonks was invited to join Sir Harold Gillies, then continuing the development of plastic surgery of the face (maxillo-facial surgery) at Aldershot and later at Sidcup. Tonks’ task was to observe Gillies’ method, and execute diagrammatic records of his techniques and processes: indeed, after leaving the RAMC at the end of 1917 he divided his time between this practice and the administration of the Slade. This is remarkable enough in itself, but it is to Tonks and his unofficial work – 69 portrait drawings of wounded soldiers with severe facial wounds – that heads have turned, and from which eyes have been averted, ever since he made them.

It is perhaps appropriate that Tonks used the unforgiving medium of pastel for these works: they made him work harder, and the accuracy and perception of his vision is undoubted. Nothing is ‘made up’; no detail omitted, and no one who has seen them, or the horrific photographs taken to record each case, will ever forget them. Amongst those who have made that discovery and who contributed at Charleston in May, were Pat Barker, Hugh Cecil, David Boyd Haycock and Louisa Young.

Histories of the Slade were piecemeal until the later 1970s, when a generation of younger curators began to make frequent visitations to the holdings of ‘modern British’ art in British national and municipal collections; they were supported by younger dealers with similar interests. Briefly, whilst there was consensual agreement concerning the electric atmosphere at the Slade during its ‘glory years’ (generally 1908–12) there was no pre-existing, expansive body of evidence to offer a balanced view of the School’s activities: textual fragments, ill-assorted photographs and personal reminiscence counted for too much, as proposed above, and influential commentators argued strongly for a dominance of modern, abstract painting over the quality of figuration: more so than had been the case during the 1910s.

The most published photograph of Tonks, craggy and hawk-like (Louisa Young writes ‘… unmistakable man, like an eagle’), came to be misleadingly representative both of himself and of the Slade: remote, rather inflexible, anti-modern and autocratic. It’s easy to knock your teacher. Put it into print and it might stick.

My own exhibition ‘Made at the Slade’ (Brighton, 1979) was the first to discuss ‘the glory years’ extensively. During the 1980s monographs of Slade alumni followed, and retrospective and thematic exhibitions with similar aims. The most recent treatment of this era, David Boyd Haycock’s book A Crisis of Brilliance (2009), has formed the basis of an exhibition at Dulwich from June to September this year. [See Sarah Lawson’s review in this issue of Cassone.] The impact Tonks had on the work and careers of the exhibition’s subjects – Nash, Nevinson, Spencer, Gertler, Carrington and Bomberg – and the new interest in his unusual career make a reassessment valuable. Tonks is one of the most legendary figures in British art education since Sir Edward Poynter RA  (Slade Professor of art at University College, London 1871–5 and later principal of the National Art Training School, predecessor of the Royal College of Art).

Anything that sheds light on the ethos of the Slade as an institution, where, according to some sources, ability and ethnicity were uneasy bedfellows, would all aid a move away from the linear chronology to which much of British art has been bound for too long. The Dulwich exhibition also creates an opportunity to re-present other vital British artists. James Fox’s recent British Masters television series (2011–13, BBC4), and, in this context, especially its first episode, ‘We Are Making a New World’, provided an intriguing and satisfying balance of the same issues, for a television audience. The Slade is everywhere.

Novelist Pat Barker may not agree. Her Toby’s Room (2012) has followed Life Class (2008) into paperback, with the Slade as its setting, and Tonks as eminence gris, yet when questioned she is disparaging of his artistic abilities. She said as much on the opening morning of Charleston, when sharing the platform with Hugh and Mirabel Cecil, who were there to promote their 2012 publication In Search of Rex Whistler. The discussion had clearly been intended to contrast the Tonks of Barker’s faction, and the real-life Professor who had divined Whistler’s natural talent at interview (Whistler was at the Slade from 1922–5) and offered guidance for many years afterwards.

Which Tonks to choose? For the Cecils, as for their subject, Tonks was an altogether different figure, not least because the biographical truths and rumours that attach to Slade staff and alumni are often richer than any fiction, and because Whistler always remembered Tonks’ counsel to go for reality in his work. A man like Tonks had to live by such a precept in order to offer it as advice, and the effort this entails is present in every mark of his Aldershot and Sidcup pastels.

Can fiction help an unknowing audience grasp harsher realities? Pat Barker’s Slade settings are merely one example of such an approach. Nash and Nevinson appear in both her books, and Barker has not so reorganized their character traits that they are unrecognizable, though they are differently named. Nonetheless, it is to Tonks, and to his and Gillies’ work at Sidcup, that Barker has been drawn, though for what purpose, other than the dramatic, is unknown. Did she seek a contrast between Gillies at Sidcup and William Rivers at Craiglockhart, with Tonks in attendance to record events?

Towards the end of the Charleston Festival, the novelist Thomas Keneally was interviewed by Louisa Young, whose grandmother worked with Gillies at Sidcup, an experience sensitively transposed into her own novel My Dear I Wanted to Tell You (2011), in which (unsurprisingly) Tonks makes a cameo appearance. The intensely visual nature of Keneally’s writing on the collective inhumanity of warfare – Gossip from the Forest (1972), Schindler’s Ark (1982) and now The Daughters of Mars (2012) – arguably surpasses that by Barker, who is surely more authoritative when she deals with literary figures than in her manipulation of artists as characters. Though the style of Boyd Haycock’s Crisis owes more to fiction than to fact, art and its institutions do not easily lend themselves to the creation of fictions, yet with so compelling and demanding a dramatis personae, the Slade’s history, together with its most famous Professor, is riper for renovation than it has been for some time.

With any luck that niggling question concerning the quality of Tonks’ output will receive a qualitative answer sooner rather than later. It will be squarely positioned on the evident value, intention and humanity of the maxillo-facial pastels: these are a matter of record. No portrait is without subjective and objective interaction between the artist and sitter. To examine the Tonks drawings is to really see that interaction at work, and the concomitant determination to sustain his own humility and moral values, as an artist and educator clearly aware of his duty, at every level.

Author:
Julian Freeman
Location:
Sussex Coast College, Hastings
Role:
Art historian
Books:
Julian Freeman is the author of British Art: A Walk Round the Rusty Pier – 16 essays on art produced in these islands over the last 500 years (Southbank Publishing, 2006) and Art: A Crash Course, a concise guide to the history of Western art (Watson-Guptill Publications, 1998)

For more information on the life and work of Henry Tonks see Suzannah Biernoff, 'Henry Tonks and the Art of Surgery', Visual Culture in Britain, March 2012, Volume 11, No. 1

In this August issue of Cassone we have a review of ‘Paul Nash, C.R.W. Nevinson, Mark Gertler, Dora Carrington, and David Bomberg: A Crisis of Brilliance’ at Dulwich Picture Gallery, Dulwich, London. These six painters were taught by Tonks at the Slade School of Art, and the title of the exhibition 'A crisis of brilliance' comes from his own description of the group.