David Boyd Haycock: ‘A Crisis of Brilliance’ – from book to exhibition 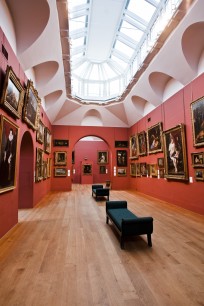 Rosalind Ormiston: The exhibition you have curated at Dulwich Picture Gallery: 'Nash, Nevinson, Spencer, Gertler, Carrington, Bomberg: A Crisis of Brilliance 1908–1922’, was motivated by your book, A Crisis of Brilliance: Five Young British Artists and The Great War [2009]. What inspired you to write the book?

David Boyd Haycock:  I was inspired from work I had been doing on the artist Paul Nash; I had written a book on Nash for the Tate in their British Artists’ series. I had written about Nash for my MA dissertation, which I did at Sussex University. I am quite interested in Surrealism, I wrote about Nash and British Surrealism. And, I had been a long fan of Nash’s war work.

When I was researching the Nash book I kept coming across that picnic photo [photo taken 1912 of a large group of students and their tutors from the Slade School of Art on a picnic - 'The Slade Picnic’, 1912, photograph, Tate Gallery], which we used as the frontispiece for the book and exhibition. Seeing in it Spencer, Gertler, Nevinson, Carrington and Bomberg I thought ‘Wow, what an amazing time to be an art student’. I had recently read a group biography and I thought it would be a wonderful subject, to get an idea of what it would be like to be a part of that group at that particular time, an amazing moment in art history.

RO: Henry Tonks, Professor of Drawing at the Slade, used the expression ‘a crisis of brilliance’, about these artists. What does it mean to you?

DBH: I see it as the way Tonks saw that these artists had in their technique and their ability, brilliance, but the crisis came in various ways: the crisis of how to use your talent and to use it well. It was not enough to be talented; you had to be able to produce something that was new, original, distinct, with that. There are also personal crises, personal struggles, as an artist. You see that in Nevinson, his struggle to live up to what he wanted to be, and to what was expected from a student artist. Nevinson talks about Tonks’ telling him to find a new career, so a crisis in his relationship with the art master. And the crises in the wider art world, the Post-Impressionists explosion. How they were going to absorb that. Tonks wanted them to have nothing to do with it.

RO: What decided you to focus on five particular artists: Stanley Spencer, Paul Nash, Dora Carrington, Mark Gertler and C.R.W. Nevinson for the book A Crisis of Brilliance?

DBH: I chose those five because they were the most closely interlinked with one another. Stanley Spencer was more on the edge with his life in Cookham and wasn’t so sociable but they all knew who he was and he was the most famous of the artists there. I wanted Spencer in; then Nevinson and Gertler were best friends at the Slade and both fell for Carrington so it made sense to have all of them; and Nash was close friends with Carrington. Those were the most closely interweaved.

RO: Why was David Bomberg included in the exhibition but not the book?

DBH: Bomberg was less closely socially associated with the others in a friendship way. He got on with his own stuff. I wanted to have him in the exhibition because his work was so different from everybody else, so unusual and exciting.

RO: Were there any others you might have included?

DBH: For a while I thought of including all of them, so William Roberts as well and Edward Wadsworth, and having a real sense of the most significant of that Slade group, but given the dimensions of the Dulwich Picture Gallery with about 70 works altogether it would have been too limited on the number of works I could have included if I had had seven or eight artists, rather than six.

RO: The exhibition highlights a change in the artists’ works after their exposure to Post-Impressionism. How did you choose the works to show that change?

DBH:  A lot of research, looking at paintings, visiting the galleries, meeting curators and looking at works they had behind the scenes, in store, and reading published biographies. It is much easier now to find obscure works of art online: the BBC have an excellent paintings project and that helped a lot.

RO: Were there any works that were a priority to include?

DBH: The aim was to whittle it down to what I felt were the best paintings and drawings and also ones that show the progression of the artist. We were slightly restricted on what we could obtain for loan. The Imperial War Museum, for example, is busy preparing for the centenary of The Great War next year so wouldn’t lend anything. The Tate was very helpful but declined to lend key works such as Merry-Go-Round [1916, Mark Gertler]. When there are omissions you have to work around it to find alternatives that tell the same story artistically.

RO: How did you set about choosing works that reflected some of the artists’ participation in the First World War, either as enlisted men and/or commissioned as war artists?

DBH: I had a clear idea of which works of that period I wanted, relating to the War; the wonderful one by Nevinson of the bi-plane in pastels, for example. [Spiral Descent, pastel on paper, 1916]. It was a sense of keeping an eye out. I started work on the book in 2002, so it’s been 11 years working with these artists and seeing their work in various places and keeping a mental note because an exhibition was in my mind.

RO: Did you approach Dulwich Picture Gallery to put on an exhibition?

DBH: I approached Dulwich. I had contributed to the catalogue of the Paul Nash show there in 2009; and I knew David Fraser Jenkins, who curated it, he strongly recommended me. Dulwich gave me a free hand to do it.

RO: Is this the first exhibition you have curated?

DBH: I was a curator at the National Maritime Museum before going freelance. This is the first exhibition I have curated to the end product.

RO:With ‘The Crisis of Brilliance’ exhibition now on display have you got plans for another book or exhibition?

DBH: I had a book published last year, I am Spain (2012), on a group of writers who went to the Civil War in Spain in the 1930s. And I have a number of projects in the pipeline, I am thinking of a watercolour exhibition for Paul Nash. And I am writing a book on modern art of the Great War, to be published c. 2016.

RO: David, thank you so much for talking to Cassone.

BUY The book FROM AMAZON

BUY the exhibition catalogue FROM AMAZON

Sir John Soane, the architect who designed the Dulwich Picture Gallery (in it's time an experimental, radical building) lived in Lincoln's Inn Fields, London, where his former home is now the Sir John Soane Museum.