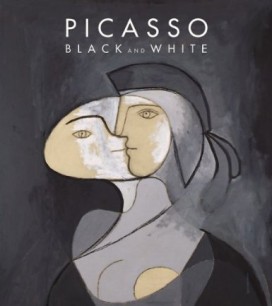 Monochrome features in a great deal of Picasso’s painting; his Blue and Rose periods, and the tans, greys and browns of Cubism. Although he never had a ‘black-and-white’ period, paintings with this palette appear in his work in nearly every decade after 1905.

That these black-and-white works were important to him is clear, as he kept so many of them throughout his life, and this publication, the well-illustrated catalogue of an exhibition of the same name held earlier this year, is refreshingly full of less familiar examples of this work, owned by the artist’s family and other private collectors.

This severe grey palette has been associated not just with Picasso’s Cubist paintings but those done over the time of the Spanish Civil War and Second World War. Nonetheless, there is not one specific motivation underlining this; the various works cannot be characterized by similar techniques, intentions, or symbolism.

An austere palette did enable Picasso to convey great emotion. His blue period expressed despair and distress; in the Second World War it became a signifier of pain and depravation.  He used it to express, or respond to, sexual or emotional anxieties, creative preoccupations, or his reactions to events such as the Spanish Civil War and the Second World War, but its use was not limited to times of upheaval, death and disaster.

For the critic David Sylvester (1924–2001), quoted by Carmen Giménez, absence of colour enabled him to isolate qualities of form. Picasso used black and white in large, complex compositions; L’Atelier, La modiste, Guernica or The Charnel House and the first of his Las Meniñasseries, works of particular strength and visual richness. They may all have great diversity of tonal values but he did not have to organize colour contrasts in them.

Giménez discusses historical contexts, from Pliny’s description of drawing round shadows (supposedly how the ‘Maid of Corinth’ invented drawing) to the use of grisaille, which permitted the representation of objects through opposition of light and dark, suggesting volume.

Disegno (drawing) andcolore (colour), coupled in Western art since the 16th century, led to sensualist painting and displaced the original mental concept that was the basis of Renaissance art. Through Cubism, Giménez says, Picasso resituated the idea of painting as a cosa mentale (a matter for the intellect) again. He rethought the roles of drawing and colour as elements independent of, and on occasion contradictory to, each other.

The context of Spain was also important. For Picasso, black-and-white was intimately related to the chiaroscuro tradition of naturalism that dominated the tradition of the Spanish school. Grey was important to both Velazquez and Goya.  But the influence of more recent artists whom Picasso respected, such as  Paul Klee and Cézanne, must not be forgotten.

The light I have at night is magnificent; I even prefer it to natural light… A light that sets of every object, dark shadows making a ring round the canvases and projected onto the beams.

In his essay in this book, Richard Shiff takes on Picasso’s use of light and shadow in his planar bent-metal sculptures, describing them as ‘paradoxes in the round’. The disposition of physical planes, the play of light and hence tone on those planes and the lines Picasso applied to those surfaces created works from a void, which were unlike traditional subject. Picasso attained their continuity of surface by allowing the eye to follow each facet of these bodies’ contours, turning obscurities of touch into light, drawing from his materials his own sensations of things.

Olivier Berggruen discusses Picasso’s use of photography as a visual aid. Black-and-white photography’s tonal range allowed for greater pictorial clarity. Colour, seen as purely decorative, was abandoned and textures, densities and variations of grey helped sustain a sense of depth and coherence.

Following photography’s ability to abstract reality, Picasso produced his faceted Cubist paintings of Horta de Ebro. Like a photographer he experimented with different lighting conditions. It became a trademark of his work. Different tonal schemes produced ‘stone-like clarity’ and stability that permeated his Cubist compositions, the linear simplicity of his post-war Classical period and a great deal of the work Picasso made through the war after Guernica.

Berggruen argues that the feeling for tonal equilibrium, that photographic eye, is taken furthest in The Charnel House, where solidity is sacrificed for the overall design. As in Cubist works, planes open into one another and a crystalline structure extends over the canvas. In pictorial terms there is a balance between the impulse to describe and the need for structural clarity.

Picasso, the great flatterer of 20th century painting, has had to cope in himself with the most uncompromising three-dimensional imagination that ever possessed a great painter.