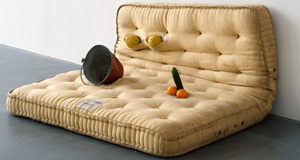 Sue Ecclestone is amused, disgusted and encouraged to think at the Whitechapel Gallery

Sarah Lucas came into the public consciousness in 1988 as one of a group of 16 students from Goldsmiths College who took part in an exhibition organized by Damien Hirst. Freeze was favourably reviewed in The Guardian and attended by Charles Saatchi, who purchased a number of works. This success prompted a further show the following year called Freeze 2, which the BBC aired along with interviews with the exhibitors. The Freeze group became known as the ‘young British artists’.

This successful start led to a first solo exhibition for Sarah Lucas at City Racing, Kennington in 1992, followed by major solo exhibitions in Rotterdam, Cologne, Liverpool and Hamburg, as well as participation in a number of group exhibitions and the 2013 Venice Biennale. ‘SITUATION Absolute Beach Man Rubble’ at the Whitechapel Gallery represents the artist’s first major solo exhibition in London and features many of her iconic works from the last two decades, giving the viewer the opportunity to see how her style and use of materials have evolved.

The early works are ‘recyclia’ or ‘ready-mades’. Using toilets, bicycles, buckets, mattresses and other items of furniture, Lucas creates thought-provoking sculpture. The most-used material for her works is nylon tights, which she stuffs, moulds, covers and integrates with other paraphernalia. Lucas uses this technique to create a long-legged ‘bunny’ in Bunny Gets Snookered #1 and Colour Bunny (1997). In the less obviously interpretable Nuds series, she contorts tights into twisted coils and in her more recent work Make Love, 2012 the tights are incorporated into wooden chairs. Her very latest works, a series of bronzes of this year, Nduda, Realidad, Hoolian and Patrick More, conceived for the Venice Biennale, are cast from kapok-filled tights; reminiscent of Brancusi, demonstrating just how versatile Lucas has been in this medium.

The entrance into the gallery warns that the exhibition is not suitable for children and indeed, I can imagine that most adults would feel uncomfortable with children in tow. In fact, a child would surely find the exhibits amusing, given that at first glance they appear to display something of ‘toilet humour’. In fact, toilets are a very frequently featured subject, as are genitalia. While the toilets may well be a take on Duchamps use of the ‘ready-made’, Lucas takes his satirical and ironical use of sanitary ware a number of steps further. In a work of the same name from 1996, Lucas adds the phrase ‘is suicide genetics?’ to the inside of a toilet bowl: Inferno (2000) is a filthy toilet containing a red light bulb, cigar and nuts. Evoking Dante’s poem, Lucas creates a hell where ‘high’ literature collides with ‘low’ art – which takes us back to the sexually explicit elements of this exhibition.

Lucas frequently represents sexuality using food items, and three works: Two Fried Eggs and Kebab (1992), Spinster (2000)and Sex Baby Bed Base (2000),use fresh ingredients that require anintervention by the gallery kitchen staff every morning. The first sculptures require the staff to add fresh fried eggs to the works every morning and the latter a raw chicken every couple of days: it would appear Lucas has created three high-maintenance women. Her men are in need of no such attention, depicted either in photographs with all manner of paraphernalia hiding their genitalia or represented through priapic objet.

If Lucas appears obsessed with portraying sexuality and genitalia, she is even-handed. At first glance the exhibition looks full of penises, but there are also plenty of portrayals of the female form:  from breasts represented by melons, stuffed tights, lemons, fried eggs and light bulbs, to vaginas depicted as buckets, kippers and raw chicken carcasses.  Lucas is clearly making a point with her characterization of male and female genitalia, and sexuality in general, but it is ambiguous.

Her representation of gender forces the viewer to wonder how the artist actually feels about the sexes. Her works could be interpreted as disrespectful and objectifying, a view taken by my male companion, but I found it difficult to be offended by the installation. My unimpressed male friend moaned that Lucas had subjugated the male form, degraded and mocked it with Soup (1989) and her wallpapers of the male nude. I argued that the same could be said of her representations of women. I wondered, however, whether Lucas, rather than trying to make some sort of anti-male, feminist, sexist view – all labels thrown at her over the years – is asking us to consider that, like cucumbers and melons, our bodies are part of the natural world, not to be taken too seriously and that sex is, to some degree, absurd.

Lucas’ latest works, the Brancusi-like bronze figures produced for the Venice Biennale, appear to owe nothing to her previous works, all of which were made from discarded or decomposable materials. These beautiful bronzes are sleek, inanimate forms that appear to reference a higher form or art; on closer inspection, however, they reveal sexual elements in their form in much the same way as her other works. Cast from stuffed tights and taking similar form to her Nuds and Bunnies series, each bronze appears to have a penis and/or breasts.

This exhibition of Lucas’ work is one that you should definitely view with a companion. I found it fun, playful, revolting and rude, but ultimately thought provoking.