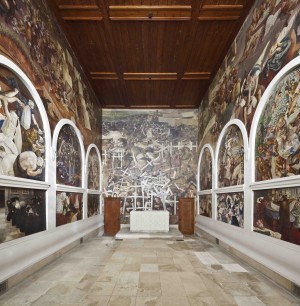 As we begin the year that marks a century since the First World War, Frances Follin visits ‘Stanley Spencer: Heaven in a Hell of War’ at Somerset House

Stanley Spencer RA (1891–1959) was an idiosyncratic, highly individual painter. His works have a somewhat childlike quality  – the rounded forms of bodies and faces – (he belonged to a group who styled themselves the ‘Neo-Primitives’) but this is combined with often-complex pictorial structures that reveal his considerable compositional skills. Although appointed as an official war artist towards the end of the First World War, in 1918, he painted only one commission in this role. In 1923, however, he began to plan a scheme of paintings for what was to become the Sandham Memorial Chapel. Most of these paintings, and some preparatory sketches and related material, are now on display in London’s Somerset House and will move on to Chichester in March, while the Chapel is being restored.

Among Spencer’s patrons were John Louis and Mary Behrend – a painting by Henry Lamb (1883–1960) of the couple with their two children is displayed. Mary’s brother, Henry Willoughby Sandham (1876–1920) had fought in the war and during this time contracted the illness that ultimately killed him. On seeing Spencer’s plans for a chapel to memorialize the war, the Behrends decided to finance the project, to be built in Hampshire and dedicated to the memory of Lt. Sandham. The architect Lionel Pearson was commissioned to design the building.

Spencer produced 16 canvases, which are on show at Somerset House, plus an altarpiece and two spandrels. The last three cannot be moved but the altarpiece is represented in one room by an actual-size projection. All the paintings here, except the altarpiece, drew on Spencer’s wartime experiences, first at the Beaufort War Hospital in Bristol, where he worked as an orderly from 1915 to 1916, and then in Macedonia where he continued to serve with the Royal Army Medical Corp. The altarpiece depicts the resurrection of the dead soldiers at the Last Judgement.

Spencer saw horrendous scenes of carnage and bloodshed that remained with him all his life and influenced his religious beliefs, which were central to his work. He told a reporter in 1927: ‘I had buried so many people and seen so many dead bodies that I felt death could not be the end of everything’. Nonetheless, most of the images here are not scenes of violence or action, but of the daily activities of military and hospital life. Titles such as Scrubbing the Floor, Ablutions, Kit Inspection, Sorting the Laundry and Tea in the Hospital Ward reflect the mundane aspects of life, but one remains aware that the patients here are men injured in battle.

The horrors of war are hinted at in other images: piles of barbed wire in Dug-out (or Stand-to), a painting in which one figure seems to be looking directly at the altarpiece as if contemplating his own death and the possibility of resurrection. The title of another hospital scene, Frostbite, indicates the sort of suffering soldiers endured beyond that inflicted by the enemy. In Firebelt men are shown using copies of the Balkan News as firelighters as they burn off a circle of vegetation round their camp to create a protective fire barrier, again indicating the dangers to which they were daily exposed.

The cycle of paintings would not be complete without the altarpiece, The Resurrection of the Soldiers, which is permanently fixed to the wall of the Sandham Memorial Chapel. The actual-size projection in the third room of the exhibition allows one to see this in considerable detail, although of course no reproduction can be entirely accurate. The design of this large (640.5 x 526cm) work is complex. White crosses such as fill the war cemeteries in Europe and elsewhere are shown tumbling across the canvas, displaced by the men who rise from their graves. Christ can be seen towards the top of the painting – a small figure  given unusually low prominence for such a work. In the centre are two mules, fallen while still harnessed to a wagon – are they also to rise again?

The overall effect of the exhibition is very moving. In the first room there are a number of paintings by Spencer’s friend, Henry Lamb, which show war scenes and portraits of Spencer himself and the Behrends, and some of Spencer’s preparatory sketches. One small painting by Spencer shows a group of poppy flowers, adopted as a symbol of the fallen and their resurrection in 1920. A video about the chapel includes some footage of Spencer talking about the work. All this provides some background to the paintings from the chapel, in the second room.

We will all be hearing a lot about the First World War over the year ahead, but these paintings are a first-hand account of experiences that no one is now alive to remember. They convey a sense of how the war took over people’s lives for four whole years, and how so many did not live to see the end of it.

For more on Spencer, see the following articles in the Cassone archive.

The National Trust urgently needs fundsfor conservation and improvement work at the Sandham Memorial Chapel.Donations can be made at http://www.findmeagrant.org/nhants  or by texting STAN14£5 to 70070 to donate £5 or STAN14£10 to donate £10.

‘Stanley Spencer: Heaven in a Hell of War’ is at the Terrace Rooms, Somerset House, London – located behind the Courtauld Gallery, on the far side of the courtyard (currently in use as an ice-skating rink). It is on until 26 January 2014, admission free.

From 15 February to 15 June 2014, the exhibition will be shown at the main galleries of Pallant House, Chichester.