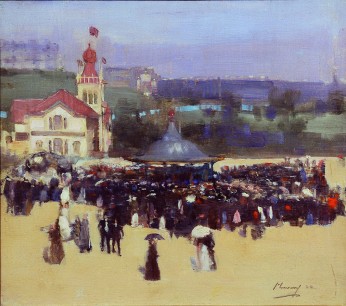 In 1873, Robert Fleming, a Scottish manufacturer of jute fabric used for sandbags in the American civil war, established the investment bank, known as Flemings, in Dundee. Investing in the American railway industry was one of the firm’s first profitable initiatives. Many such ventures followed. One endeavour that was not, however,  pursued in the interests of profit was the creation of the company’s renowned Scottish art collection, which was started in 1968, by David Donald, a board director, as a means of brightening up the firm’s interior.

Donald’s brief ‘mission statement’ was that the artwork should be by Scottish artists or evoke scenes of Scottish life. Donald bought what he liked without regard to profit potential. Some of the work cost just a few hundred pounds: Scottish art wasn’t then sought after by international dealers.  In time much of what Donald purchased – particularly the work of the Glasgow Boys and Scottish Colourists – increased markedly in value; and the collection evolved, with the aid of professional expertise, into a unique artistic phenomenon – an eclectic body of Scottish art belonging to a private enterprise, appreciated by employees, clients and directors, but, alas, not the general public.

In the late 1990s Flemings suffered from a deepening financial crisis and the directors resolved to sell the business. The firm feared that the cherished art collection would not necessarily be viewed as a sales perk. New owners might not maintain it and  preserve its cultural identity. They might not appreciate its distinctive role in bringing to the fore the extraordinary art created north of the border.

Fortunately, Flemings ensured that if the firm were sold the artwork would be looked after by a charity, namely the Fleming-Wyfold Foundation. In 2002, rather than being dispersed, the collection was opened to the public, so it could be shared the world over. The gallery is light and spacious, and peaceful; one doesn’t sense the flurry of the city life outside.

An illustrated publication, A History of Art, by two past Keepers of the collection, Selina Skipworth and Bill Smith, highlights 200 of the roughly 800 artworks held, presenting an enjoyable and unpretentious overview of the enriching range of artwork you may find at the gallery. It serves as well as an introduction to Scottish artistic movements and innovation. Each illustration is accompanied by absorbing passages about the personal and professional life of the artist.

The Fleming adventure begins with the blossoming of art in Scotland in the 18th century, when opportunities burgeoned for artists to study and work in London and abroad, by virtue of an increase in arts patronage afforded by the aristocracy and professional elite. The Act of Union in 1707 had benefited these echelons financially. The Scottish Enlightenment also encouraged the flowering of artistic endeavour.

Landscape and portrait painting were the most dominant painterly subjects. As Skipworth and Smith suggest: ‘the influence of Rome and neo-classical art was omnipresent’. Yet, there was no discernible Scottish style; the people depicted and the scenery was what was culturally definable.

Leading figures of portraiture, whose work is included in the collection, were Sir David Wilkie, Alexander Nasmyth, Allan Ramsay,  and Sir Henry Raeburn.   Ramsay, the son of the poet Allan Ramsay, is credited with influencing Gainsborough and Reynolds and being an important figure in the Scottish Enlightenment, as a linguist, Classical scholar and ‘man of letters’. His friends and acquaintances included Samuel Johnson, David Hume, Adam Smith, Rousseau and Voltaire. Raeburn, it’s considered, had the near monopoly of portraiture in Scotland. He was well respected for his penetrating, evocative paintings of the upper echelons of Scottish society.

In the 19th century an increasing number of artists began to depict scenes of everyday life, the rustic, urban and domestic – images known as genre paintings.  They veered sharply away from the snobbish depiction of the elite.  A notable painter of extremely poignant settings, because of his emphasis on pathos and the passing of ways of life, was Thomas Faed. At the gallery I saw his haunting The Last of the Clan, which depicts impoverished peasantry during the devastating and brutal Highland clearances. At that time, many tenants of small holdings were evicted by landlords who wanted to create larger, more efficient farms, causing widespread suffering in the process.

In the later 19th century Scottish painters began to exhibit a distinctly innovative style, which Smith and Skipworth attribute in part to an influential Edinburgh-based teacher and painter, Robert Lauder. He encouraged students to experiment with colour and painterly technique. One of his most outstanding pupils was William McTaggart. Bay Voyach, Summer Time illustrates his Impressionist style and expressive use of colour, tonal values and brushwork, refreshingly devoid of rigid detail and anecdote. The children are almost transparent in the seascape. McTaggart preferred to be ‘first in my own country’ rather than ‘second in any other’.

McTaggart’s work could be viewed as a precursor to what is now famed for being the work of the Glasgow Boys (1880–95), who abhorred the refined romantic landscapes and sentimental story-like genre scenes to which many fellow artists were devoted. They were attracted to realism and naturalism, plein air painting, and, like McTaggart, the painterly revelations of the effect of light and shade on colour. They each had an individualistic way of reflecting intimacy, atmospheric nuances, composition, and vigorous brushwork. Chief influences were Jules Bastien-Lepage (1848–84), Gustave Courbet (1819–77), the Barbizon    and Hague School artists. Noteworthy figures whose work is in the collection are Robert Macgregor (1847–1922), James Paterson (1854–32), James Guthrie (1859–1930), Edward Walton (1860–1922), Joseph Crawhall (1861–1913), Henry Raeburn (1756–1823) and Irish artist John Lavery (1856–1941), who studied in Glasgow. Glasgow was the springboard for theses artists’ emergence.

Another distinctive innovation that emerged was the ‘Glasgow Style’ – Art Nouveau – which took root at the end of the 19th century. Its leaders were Charles Rennie Mackintosh,   Herbert McNair and Margaret and Frances MacDonald. They developed ‘stylized drawing, frequently depicting a geometric representation of bulb and bud leaf and petal, or a melancholy dream world of gaunt, elongated female forms with flowing hair’.

The Scottish Colourists, notably Leslie Hunter (1877–1931), J.D. Fergusson (1874–1961), Francis Cadell (1883–1937), and Samuel Peploe (1871–1935), did not develop purposefully as a group; the term wasn’t used to describe them until 1948, although the early 20th century marked the appearance of the work.  They were influenced by the work of the French Impressionists and especially Post-Impressionists, such as Paul Cézanne, and the Fauves: Henri Matisse,  André Derain (1880–1954), and Georges Rouault (1871–1958). Their colourful style and expressive landscapes and still lifes are distinguishing. The collection holds work by all these artists.

Cadell admired J.A.M. Whistler   immensely for having ‘what some great painters have – a certain “amateurishness” which I rather like…’ At the gallery I saw his impressionistic, subtly toned depiction of an uncluttered interior with the gentle hint of a vase with a rose, Roses. Hunter lived for a while in California, where his father was an orange farmer, and worked as an illustrator before becoming a painter. The 1906 earthquake in San Francisco destroyed all the paintings he was to exhibit in his first one-man exhibition; fortunately this didn’t dampen his talent and enthusiasm.

The love for expressive and rich colour has had a profound influence on the generations of artists who followed the Glasgow Boys and Colourists. This can be seen especially in the work of Alberto Morrocco.   Yet in the 20th century and the present day, one could not posit irrefutably that there are distinctly Scottish artistic movements, dominant artistic forces. The globalization of art encourages artists to experiment with diverse techniques, media, forms and subjects, often in a personal context.

For example, the series of crucifixions and nativities by Craigie Aitchison (1926–2009)  have been informed by his family’s deep involvement with the church; his grandfather was a minister. His highly individualistic work is characterized by its portrayal of just one or two simply formed and centred elements, such as a bird or cross, placed against a boldly coloured background. Before studying art Aitchison trained to be a barrister.

If we ask who are considered the modern and contemporary ‘greats’, as well as the emerging stars, whose work is featured in the collection, the answer would and only be subjective.

Even so one could, without controversy, suggest such ‘notables’ as Anne Redpath (1895–1965), the daughter of a tweed designer: ‘I do, with a spot of red or yellow in harmony with grey, what my father did in his tweed’. Her still lifes and landscapes have an abstract quality with a realistic core. She uses colours and paint forcefully. One sees the influence of Matisse and Gauguin. Other Fleming notables are Wilhelmina Barns-Graham (1912–2004), Sir Robin Philipson (1916–92), Joan Eardley (1921–63), Elizabeth Blackadder (b.1931),   John Bellany (1942–2013), Barbara Rae (b.1943), and Eduardo Paolozzi (1924–2005). Relatively young but esteemed artists whose work is with the Fleming are Shona Barr, Peter Howson, Nina Murdoch and Alison Watt.

The Fleming Collection calls itself appropriately an ‘ambassador for Scottish art’, steadfastly promoting awareness of a rich and underappreciated cultural heritage alongside the work of contemporary artists studying, living and working in Scotland.  Both the Foundation and the artwork deserve a more powerful round of applause. David Donald merits ‘bravissimo’.

For further information about the Fleming Collection, opening hours, events and exhibitions, visit www.flemingcollection.com. The Foundation organizes lectures, funds art prizes and bursaries, publishes the informative Scottish Art News and displays the work, in themed temporary exhibitions, of emerging (many recent art school graduates) and established contemporary artists – which includes paintings, sculpture, film, photography, printmaking, architecture and installation – together with revolving displays of work from the permanent collection. The Foundation tries to keep as little in storage as possible; loans to museums are encouraged. Some de-accessioning has occurred over the years in order to concentrate on artwork of ‘museum quality’ and fund contemporary acquisitions.  About ten works have been added since the gallery opened. There is no online catalogue, although roughly half of the work held is noted on the site for Bridgeman Art.

For more on Scottish art see the books recommended by Jenny Kingsley - links above.