Suprematism to Supranaturalism: innovation, invention and imagination in the work of Kazimir Malevich 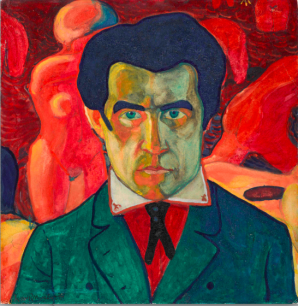 Patricia Railing, an expert on the work of Kazimir Malevich, visited Tate Modern to report on the new show of work by the great painter and designer

With the opening on 16 July 2014 of ‘Malevich’ at Tate Modern in London this large retrospective reached the third and final venue in a tour of three cities. The exhibition premiered at the Stedelijk Museum in Amsterdam in October 2013, to travel to the Bundeskunsthalle in Bonn in March, and by the time it closes in London it will have been on view for just over a year. It is truly a celebration of the painting, architecture, theatre design, drawings and gouaches by Kazimir Malevich, complemented by works of several colleagues. The latter works come from two major collections, the Khardzhiev Foundation within the Stedelijk Museum, Amsterdam, and the Costakis Collection in the Museum of Modern Art, Thessaloniki. The exhibition contains over 80 paintings by Malevich from c.1905–20, all of which come from museum collections in the West and in Russia, 5 Arkhitektons, 20 late figurative paintings, with over 125 works from the Khardzhiev Foundation, mainly on paper from the artist’s late period. The 50-plus contributions from the Costakis Collection include works by Olga Rozanova, Liubov Popova, Ivan Kliun, M. Matiushin, El Lissitzky and Malevich’s students Ilya Chashnik, Nikolai Suetin, and Gustav Klutsis, showing Malevich’s creativity in context with his contemporaries and his students.

The exhibition is arranged chronologically, beginning with Malevich’s earliest sacred and profane miniatures inspired by the icon tradition. His painting from around 1905 travels through the contemporary European modern styles of Impressionism, Fauvism, Futurism and Cubism, and between 1915 and 1920 flowers in the artist’s unique innovation, the non-objective painting of Suprematism. His figurative ‘Supranaturalism’ works of the late 1920s close the exhibition.

The paintings from 1905 to 1920 are hung spaciously, while the Suprematist paintings of 1915 are shown much as they are seen in the one known installation photograph when they were first exhibited in Petrograd at the ‘Last Futurist Exhibition of Paintings 0.10’, a hanging that originated with the Stedelijk installation of the show. Some canvases of 1916 are grouped around a consistent range of colours – red in particular – which makes a striking impact, while the minimal compositions of single planes of colour of 1917 and three of the White on White canvases of 1918–19 are complemented by white plaster models of Malevich’s early architectural projects, the Arkhitektons. In these Suprematist rooms, the visitor moves through the experience of this non-objective style, from the static to the dynamic and back to the static, the canvases gradually increasing in size and having a singular impact.

Although the works shown in Amsterdam, Bonn and London are largely the same, the London catalogue is completely different to the Stedelijk one. Indeed, the works reproduced in the catalogue versions are also different and but a selection of those exhibited. To take part in this touring exhibition was initiated by Nicholas Cullinan, then Exhibitions Curator at Tate Modern before moving to the Metropolitan Museum of Art in New York, who engaged with the Malevich Society in New York, several of whose members contribute to the catalogue – the new President, Christina Lodder, Nicholas Cullinan himself, and Maria Kokkori. Other contributors are from lending museums – Evgenia Petrova (State Russian Museum, St Petersburg), Masha Chlenova (Museum of Modern Art, New York), and Iria Candela and Achim Borchardt-Hume of Tate Modern. These texts are complemented by articles by John Milner (Courtauld Institute) and Maria Gough (Harvard University). The concept of the catalogue is a kind of kaleidoscope view around Malevich’s creativity as a painter, an alogical book creator, an art historical theoretician, a creator of exhibitions, a designer of architecture and of Suprematist banners and street murals, all themes that are demonstrated in the exhibition.

Catalogue and exhibition complement each other, the articles serving as introductions and presentations to these several themes, but nowhere is there any attention given to how Malevich embarked on the creation of Suprematism, that paradigm shift from objective to non-objective painting in 1915. As with other great early 20th-century innovators such as Vasily Kandinsky,  Frank Kupka, and Piet Mondrian,  the look of Malevich’s painting changed radically because it arose out of entirely new concepts about what painting is. The viewer is left perplexed, still wondering, ‘what is Suprematism?’, a question that goes unanswered.

Nor has there been any attempt to standardize the titles of paintings and of Suprematist paintings, in particular. They seem to be those given by the lending museums and generally are curators’ titles rather than Malevich’s own. He never titled a work, ‘Suprematist Composition’, for example, but rather, simply, Suprematism, while Tate Modern’s Supremus No. 55 is called Dynamic Suprematism, a later attribution, and dated in the catalogue as ‘1915–1916’, even though its date is known to be of early 1916. A Cubo-Futurist work that was shown in 1913 in the Knave of Diamonds (Moscow) was reproduced and titled Lamp on a Table in a newspaper article of February 1914, but that title is ignored and replaced by an invented title, ‘Composition with Piano’. Titles such as Suprematist Composition with Plane in Projection’ are pure fantasy. Where it applies, the crucial difference between ‘composition’ and ‘construction’ goes unnoticed.

The catalogue is beautifully produced and each section is provided with a good chronology that gives context to the works on exhibit. The ‘Further Reading’, on the other hand, is woefully inadequate, even tendentious, and is but a partial cross-reference to sources cited in the catalogue essays.

Turning back to the exhibition, the paintings of Malevich provide the eye and the mind of the spectator with innovation, invention and imagination in the uses of colour, of textures, of arrangements of forms, both objective and non-objective. Kazimir Malevich was, truly, a great painter.