Moroni: an Italian master of realism 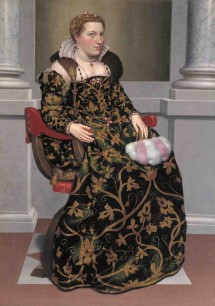 It was like walking into an Italian palazzo full of wonderful paintings. This was the experience at the Royal Academy’s exhibition Giovanni Battista Moroni (until 25 January 2015). Forty works by an Italian master of realism come to life in the RA’s Sackler Wing, which feels more like a series of intimate room settings than a gallery space.

Giovanni Battista Moroni (c.1521/4–1579/80), was born in Albino, a small town in the northern Italian province of Bergamo, near Milan, at that time under Spanish rule. This exhibition, in a chronological survey, studies his rise to prominence through his finest portraits and altarpieces.  In the first room we are introduced to Moroni’s tutor in art, Alessandro Bonvicino, known as Moretto da Brescia (c.1498–1554), and ‘the Raphael of Brescia’. Moretto is said to have been influenced by Giorgione and Titian.

In Room 1 we can compare Moretti the tutor with Moroni the pupil.  Two religious works by Moretti, including an altarpiece Madonna and Child on a Throne between Saints Eusabia, Andrew, Domneone and Domno, 1536-37, and two secular portraits, superb in content, composition and realism, reveal the style that informed his pupil’s later works. To make that point, shown in the same room is the distinctive Portrait of M.A. Savelli, c.1545–8, originally thought to be by Moretti but now assigned to Moroni.

In Room 2 , two seemingly similar works titled The Trinity, reveal one to be by the celebrated Venetian painter Lorenzo Lotto, c.1519–21, the other a newer version by Moroni, c.1552–3. The latter highlights a move toward naturalism, due partly to the Catholic Church’s determined Counter-Reformation movement, which affected Moroni’s work too.  In 1551 he was summoned to Trent (where the Council of Trent, 1545–63, met to discuss the problem of Lutheranism). He painted Madonna and Child in Glory with Doctors of the Church, 1551, for the Chiesa di Santa Maria Maggiore, where the Council met (not on display). It marked the transition point of his career towards a celebrated reputation.  Not to be missed before leaving Room 2, is a beautiful devotional work A Gentleman in Adoration before the Baptism of Christ, c.1555–60, and the unflinching realism of Portrait of Lucrezia Vertova Agliardi, 1557. Referring to this work in the exhibition catalogue, curator Simone Facchinetti notes Moroni’s ability to capture ‘physically believable but morally idealised figures’.

From here it feels as if one has entered the private, secular domains of the nobility of Bergamo to meet aristocratic members of the feuding Albani and Brembati families. A full-length sensational Portrait of Gian Gerolamo Grumelli (The Man in Pink), c.1560, in an architectural setting, always favoured by Moroni, is full of symbolism and allegory. An inscription possibly refers to marriage to his second wife, the talented poet Isotta Brembati.  Here Portrait of Isotta Brembati, c.1553, hangs to the left of her husband’s. Seated in a scarlet Dantesca chair she wears an opulent emerald green dress. Opposite Brembati hangs a portrait of another literary talent, the poet Countess Lucia Albani Avogadro, c.1555–60, also seated in a Dantesca chair. She wears the very latest fashion, a glittering brocade dress in red, which Moroni captures exquisitely.  Portrait of Faustino Avogadro (The Knight with the Wounded Foot), c. 1555–60, is Lucia’s husband, looking disdainful, in a full-length portrait, surrounded by pieces of luxurious armour, attributes of his military career. (The portrait title refers to a support he wore on his lower left leg). Other family portraits hang in this room. Whilst the Albani and Brembati were warring – not unlike Shakespeare’s Capulet and Montague families in Romeo and Juliet – Moroni managed to be commissioned by both factions.

There is so much to enjoy in this exhibition. Particularly remarkable is The Last Supper, 1566–9, commissioned by the Confraternita del Santissimo Sacramento, Romano di Lombardia, in 1565. In addition, Moroni’s portraits of middle-class individuals, such as Portrait of a Lateran Canon (Basilio Zanchi?), c.1558, and Portrait of a Young Lady, 1560–5, are amongst his finest works. So too is Portrait of Giovanni Gerolamo Albani, c.1568-70, displayed in the final room with portraits of Moroni’s friends. Looking closely one sees in Albani’s hand a small book. This studio prop appears again in Portrait of a Lady in Black (Medea Rossi?), c.1572–3, and Portrait of an Elderly Man seated with a Book (Pietro Spino?), c.1575–9, displayed alongside. A favourite here is Portrait of a Tailor (Il Tagliapanni) c.1570, a Moroni masterpiece.

The artist is noted for his ability to capture exact likenesses and character. In each of the 40 paintings (and a single, rare drawing), one is drawn to observe Moroni’s infinitesimal attention to detail. This exhibition of works encapsulates why Moroni deserves so much attention today. It is the first comprehensive appraisal of Moroni’s art in the UK. It is curated by Simone Facchinetti of the Museo Adriano Bernareggi, Bergamo and Arturo Galansino of the Royal Academy.

‘Giovanni Battista Moroni’ is at The Sackler Wing, Royal Academy of Arts, Piccadilly, London W1J 0BD.  Now on until 25 January 2015.