Pop art – the folk art of the sixties? 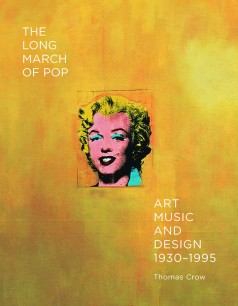 Thomas Crow’s new book presents a rich history of Pop art, and of America as its cradle

Once regarded as an essentially American and British experience, Pop art is now being recast as a global phenomenon. The current show (until 3 March) at London’s Saatchi Gallery ‘Post Pop: East meets West’ looks at its legacy in China and Russia, and Tate Modern’s forthcoming blockbuster ‘The World goes Pop’ will feature work from Eastern Europe, Latin America, Asia and the Middle East. Nonetheless, an impressive new study The Long March of Pop: Art, Music and Design 1930-1995 by Thomas Crow shows there is still more to be discovered and said about Pop’s distinctly American roots.

Crow, a professor of modern art at New York University, has produced not just a new art history of 1960s Pop art, but also a rich social history of the movement. Although primarily for an academic audience, it is essential reading for anyone, albeit with some prior knowledge, interested in a movement much raked over, but still rewarding further inspection. Crow focuses on ‘a phalanx of artists’: Robert Indiana, Roy Lichtenstein,  James Rosenquist and Andy Warhol,   who are deemed emblematic of Pop’s radical refiguring of the everyday. Yet, the book reads like a who’s who of the 1960s; Pop artists Ed Ruscha  and Claes Oldenburg,  maverick graphic designer Milton Glasser and counter culture icons such as actor Dennis Hopper  and Che Guevara along with Brits such as David Hockney  during his sybaritic Los Angeles days. Women and non-Caucasians are thin on the ground – more a reflection of the times than the author.

Rather than seeing its origins in the post-war consumer boom, as is usually the case, Crow presents a genealogy of Pop that starts with the folk art and music revivals of the 1930s and ’40s, the latter exemplified by folk singer Woody Guthrie. For Crow, Pop art is intimately bound up with popular music and its inclusive sentiment, and both are seen as seismographs of deeper social changes, as is the graphic design of the period, which extended the Pop aesthetic beyond the realm of fine art. For example, he draws parallels between Bob Dylan’s shift from an acoustic to the electric guitar in 1965, which infuriated folk purists, and Pop’s far-reaching embrace of mass culture that so appalled the art world old guard.

But Crow is no flag-waver. He acknowledges American Pop’s indebtedness to British developments of the 1950s; the notion that mass culture is valid material for fine art, and the impact of the Beatles during the 1960s. Nonetheless, it is America’s indigenous vernacular culture, both the artisanal and mass-produced, and its appreciation, that are the fountainhead of the country’s Pop art. Take the case of the proto-Pop artists of the 1940s and 50s such as the relatively unknown Harry Smith, an erudite painter and animator who sought to find a visual analogue to bebop jazz in his idiosyncratic abstract art, or the more famous Jasper Johns, who incorporated folkloric artefacts in his work of the 1950s.

Crow details how American Pop artists recorded, mimicked and distilled the vernacular, sometimes as fodder for complex allegories, as in Robert Rauschenberg’s   mixed media ‘combine works’ or occasionally for direct social comment. Robert Indiana’s anger at the violence directed against the Black Civil Rights movement crystallized in ‘The Confederacy’ series of paintings from 1965, based on denuded decals and signage.

Crow also discusses how the marginal and local inflected Pop by providing alternative aesthetic standards and iconography. In California, Pop artist Billy Al Bengston’s sleek paintings drew on the imagery and techniques of the surfer and hot-rod sub-cultures with their skilled customizers and pride in workmanship. Indeed, Crow contends that: ‘The best Pop regularly finds its themes and subjects in minority enclaves of everyday cultural expression...’.

Pop seemed to have faded quickly, superseded by more austere and elitist movements such as Conceptual art.    Yet for Crow, Pop’s achievements and sensibility endured and re-surfaced in American Punk rock of the late 1970s, with its anarchic visual culture grounded in the everyday. This is seen in Raymond Pettibon’s  comic-like graphics, and during the 1980s and 90s in Jeff Koons’   kitschy sculptures and the controversial art of media-savvy Damien Hirst.

The Long Marchis extremely well illustrated, and not just with Pop art, but also with the grist for its mill: Americana, naïve art, advertisements, film stills, LP covers, comic strips, magazines, documentary and press photographs, which in themselves present a fascinating record of an extraordinary period.

The Long March of Pop