The Guildhall Art Gallery – the art of the City 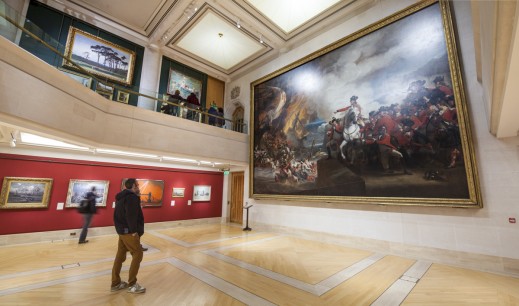 A few minutes’ walk from the Bank of England, in the heart of ‘the City’, London’s financial district, is an unusual type of valuable asset: the Guildhall Art Gallery; and its stock is certainly not for trade. It stands on the east side of Guildhall Yard, an attractive civic site dating from Roman times which became the official home of the City’s government during the early Middle Ages. Guildhall, the municipal seat of the City, on the north side of the ‘Yard’, is akin to a Town Hall. It was constructed during the 15th century. A rather phantasmagorical ‘Hindu Gothic’ four-storey porch by architect George Dance the Younger was added during the 18th century, followed in the 1960s by a glazed cloister with a pyramidal roof.

The Gallery showcases the art collection of the City of London. The collection, amassed with bequests, acquisitions and commissions, originates from the late 17th century. Its roots are the Gallery’s first commissions: 22 portraits of the ‘Fire Judges’: those responsible for resolving land disputes after the Great Fire of London in 1666. There are some 4,500 artworks in the collection, and it is still growing. Victorian art and paintings of London scenes are notable gems among works we can see and those in store for lack of space.

One of the most awe-inspiring pictures,The Defeat of the Floating Batteries of Gibraltar (1791), by the American artist John Singleton Copley (544cm x 754cm), occupies the entire back wall of the exhibition space. We see General Sir George Elliot on horseback pointing to the battle between the British and Spanish land and sea forces. Within the Gallery, at the lowest level, lie the remains of a Roman amphitheatre.

The idea for a gallery for the collection originated in Victorian times, when many art museums in London were being established for public benefit.  The Gallery opened in 1885 but was almost totally destroyed during the Second World War. It remained as a shell, with a temporary steel roof, for several decades until 1994 when the Lord Mayor laid the foundation stone and the construction of a new building, on the site of an old courthouse, began. In 1999 Her Majesty the Queen formally opened the Gallery.

From the 1950s the City of London envisaged replacing the Gallery, but other priorities and laborious considerations stalled its fruition. Heated debate concerned how best to expand the Yard to allow for increased office and ceremonial space, the disposal or refurbishment of various buildings in the Yard, and the architecture of the Gallery itself.  Various dissenting heritage groups had very particular views, as did the town planners. The discovery of the remains of the amphitheatre and decision to incorporate them within the Gallery also took its toll, as did a nesting bird in one of the bushes on site. This was a Black Redstart, one of a rare protected species, which had laid three eggs. English Nature (now part of Natural England) decreed the nest must remain undisturbed until the birds had flown. In 2004, the architect of the new gallery, Richard Gilbert Scott, the son of Sir Giles Gilbert Scott (who designed the Anglican Liverpool Cathedral, Bankside power station, now Tate Modern and London’s red telephone ‘boxes’) revealed what a tortuous process this all was in an account he gave to the Guildhall Historical Association.

Scott recalls that the ‘Remembrancer [an official who represents the City of London on ceremonial occasions] needed the Art Gallery spaces to be used for ceremonial purposes with a floor to ceiling height in the main gallery sufficient to allow for the Pikemen* to do their drill; also to provide cloakroom accommodation for 1200 people attending Civic Banquets. The Art Curator naturally required the space to hang, conserve and store the Corporation’s collection… I believe the largest in Britain, after the National and Tate Galleries’.

One could suggest that the building is ‘postmodern’ with a ‘take’ on Gothic.  Square and rectangular arches with canted (angled) corners are a recurring architectural theme. The six main dominating windows are divided with each of the two divisions having geometric tracery-like stone mullions. The arches running along the front entrance side of the Gallery help to create a sort of stoa, or sheltered promenade. There are ‘intimations’ of a mansard roof, prompting thoughts of French Second Empire architecture, though this is stretching my imagination.

The top – main – floor of the Gallery is top lit; beneath at Yard level are subsidiary galleries. (There are offices above the Gallery.) Storage and conservation areas and the cloakrooms are below, near the amphitheatre. In 2000 the Gallery received the City Heritage New Architecture Award for enhancing the city’s environment.

Recently, over a six-month period, the Gallery has undergone a ‘rehang’ and refurbishment. A new state of the art LED lighting system illuminates the displays. Artwork from the collection of Victorian art is now presented in the main gallery, in seven themed contexts: Home, Beauty, Faith, Leisure, Work, Love and Imagination, rather than chronologically. The curators consider this to be more meaningful to visitors today.

The woman at the centre of Rossetti’s   La Ghirlandata (the garlanded lady) symbolized a new way of conceiving of feminine beauty. The central woman, playing a harp, is red-haired, strong boned, sensuous, wearing loosely fitting clothing. She is freed from tight laces.  In My First Sermon, by John Everett Millais,  a young girl sits upright on a pew, looking very alert. In My Second Sermon, she is asleep in the same pew. Is she weary of religion? It’s said that the then Archbishop of Canterbury claimed the painting was a warning against ‘the evil of lengthy sermons and drowsy discourses’.

Hugh Goldwin Riviere’s Garden of Eden focuses on a young couple walking in winter in a park. The man, judging from his dress, is a City clerk, and the quite well dressed woman wears a prim hat and long coat. They look deeply in love.  A commercial gallery’s website says that the painting was created by Riviere to help the couple financially. The woman was an heiress in real life. She had been cut off from her family inheritance because she had eloped with the gentleman. He certainly was not acceptable as her husband, as he held no position in ‘society’.

Some of the Victorian works are being publicly exhibited for the first time. The colour of the main gallery’s walls, previously a rich dark civic red, is now Victorian green. The colour, according to the curators, was inspired by the Grosvenor Gallery, which in the late 19th century displayed work by artists outside the British art mainstream, such as Edward Burne-Jones,  Whistler,  Millais and Walter Crane. Traditional brass chains, like those used in the 19th century, are used to hang the pictures.  False walls give more hanging space.

The subsidiary galleries feature temporary exhibitions exploring different aspects of London’s history and places, specific artists’ work, and cultural themes, which have a bearing on the capital’s cultural landscape. A recent exhibition was ‘120 Years of Tower Bridge’.  Historic and contemporary perspectives – paintings, watercolours, prints and photographs – illuminated the unique quality of this bridge.  As well as early views of the pomp and circumstance associated with the bridge, for example by the Victorian maritime painter W.L. Wyllie, work by Royal Academician Chris Orr features. The bridge itself is a focal point, especially for those who live and work around it.

Another past exhibition showcased art inspired by the Victorians, including work by Grayson Perry   and Paula Rego. In 2012 paintings by John Bartlett were displayed. His work highlighted disturbing urban issues such as riots and the police, terrorism and disease.

One artist whose work forms part of rolling displays is Sir Matthew Smith (1879–1959). His vibrant colours contrast sharply with older, grandiose pictures of London. The City of London owns the largest collection of his work, some 1,000 paintings and drawings that were presented in 1974 by his heir, Mary Keane. I was fortunate to see rather foreboding and poignant landscapes painted after Smith had served in the Second World War and subsequently suffered from a nervous breakdown, as well as radiant, hopeful scenes. For sixth months from July onwards, the exhibition ‘No Colour Bar, Black British Art in Action, 1960–1990’will feature contributions from British artists reflecting and appreciating an African and Caribbean cultural heritage.

What’s special about the Gallery is that it is not a collection of historic artwork and artefacts attracting damp and dust. With its imaginative exhibitions displayed in such bright and spacious surroundings it proves how the past can be reinterpreted to shed fresh light on the present. Last year the Gallery attracted over 70,000 visitors. That’s a pretty good interest rate.

The City of London – A Companion Guide by Nicholas Kenyon

The History of Guildhall Art Gallery

Jenny Kingsley recommends the books in the Affiliated links section above.

The Pikemen mentioned in the article are part of The Company of Pikemen and Musketeers, one of the ceremonial units of the Honourable Artillery Company (HAC), incorporated by a Royal Charter of Henry VIII in 1537, and now actively a regiment of the Territorial Army. The pikemen, dressed and equipped (with pikes), as members would have been in the 1640s, provide a ceremonial bodyguard to the Lord Mayor of the City of London, escorting him when he is on official business. Only those who have served in the Territorial Army may join.
Visit Guildhall Art Gallery’s website  for information about the opening hours, tours, educational programmes and exhibitions. For information about the collection, refer to www.collage.cityoflondon.gov.uk

The Corporation of London governs civic life ina specific area of East London where the financial services district is located. It could be conceived of as the oldest independent local authority in Britain, dating back to the Roman occupation. It has no charter of incorporation.
The governing body comprises the Lord Mayor, Sheriffs, aldermen (similar to borough councillors) and Court of Common Council. Members of the governing body are non-partisan. Meetings take place in the Guildhall. The Corporation is the third largest sponsor of arts in Britain. It owns and manages the Barbican Centre, funds and manages the Guildhall School of Music and Drama, and provides part funding for the Museum of London. It provides the main support for the City of London Festival, a highly acclaimed performing arts festival.
The Corporation also runs the four bridges crossing the Thames into the City and safeguards opens spaces such as Hampstead Heath, Epping Forest and Burnham Beeches.