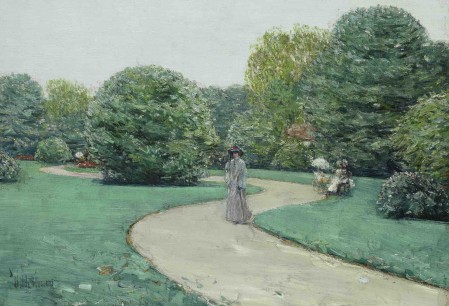 In the late 19th century, America dealt with a crisis in its national identity by embracing the garden in all its forms

Gardens offer a rich source of information about the culture that created them.  Paintings of gardens add yet another layer; as well as revealing much about the politics and aesthetics of the time, they also  suggest how the gardens were viewed and how they were used.  This book, the catalogue for an exhibition held last year at the Pennsylvania Academy of Fine Art, explores the response of America's late-19th-century Impressionist artists to their horticultural heritage.

At the time, America was undergoing an identity crisis; an influx of immigrants, a  newly rich industrialist class, rapid urbanization and the proliferation of commuter suburbs were challenging America's sense of itself and its setting.  Modernism in art and literature showed an alarming lack of respect for the past, and even feminism caused anxiety as it was noted that women's reproductivity declined as they became educated.  Channelling a widespread fear that the country would be overrun by fast-breeding foreigners, Theodore Roosevelt railed against the contemporary woman who 'deliberately avoids marriage, and has a heart so cold...so shallow and selfish as to dislike having children'.  Indeed he claimed that childless women were, 'in effect criminal(s) against the race, and should be an object of contemptuous abhorrence to all healthy people'.

This disconcerting discourse was carried into horticulture as nationalism mixed with nostalgia to create a vogue for 'old fashioned' gardens.  Essentially an American version of the popular British cottage style, these gardens avoided any hint of pretention or display, suggesting, instead, such old-fashioned virtues as dignity, humility, thrift, convenience and independence.  But here, too, the language of nationalism veered towards xenophobia.  While England's champion of wild gardens, William Robinson, advocated the massing of plants from all parts of the world, a 1912 article in America's House and Garden asserted: 'the true wild garden may not, in the very nature of things, harbor any plant which is not native to the continent'.  Another declared 'our national pride ought to influence us to choose native plants instead of foreign ones', while Country Life in America claimed the wild garden of native material 'accords with our racial temperament, therefore it is destined to become the dominant style'.  As in horticulture, so too in art: the painter Theodore Robinson asserted that artists worked best in their native landscapes 'because they are drawn there by ties of race’.

While America's gardeners attempted to create distinctly American gardens, her artists evolved a distinctly American way of depicting them. Indigenous elements such as white picket fences, deep porches, native plants and winter scenes place these images clearly in the New World.  There is also a preoccupation with planting,  design and the wider context; where European artists preferred dense, tangled, apparently artless foliage in timeless, enclosed spaces, the Americans display a sense of the world beyond, including distant landscapes, orchards or suburban dwellings in their garden images.

In his introductory essay, John Dixon Hunt also notes that while women figure prominently in most garden art, in America they appear more active; rather than simply ornamenting the space or providing a symbolic 'women as nature' presence, they tend to be engaged in tasks: hanging out laundry, weeding, harvesting vegetables or minding children.  Whether this can be explained by national character, greater equality or simply the abundance of women artists among America's Impressionists, he leaves the reader to decide.

The book ranges widely, from ephemera such as book jackets, feed packets, sketches, photos, plans, cartoons, magazines, stained glass and garden sculpture to paintings by some of America's favourite artists, including John Singer Sargent, Mary Cassatt,  William Merritt Chase  and Childe Hassam. The catalogue contains several thoughtful essays that consider such topics as the challenge urban parks posed to social hierarchies, the effect of new printing techniques on painting, the rise of women landscape architects and the politics of nature conservation.

But perhaps the most interesting theme, and one which underpins the whole study, is that of gardening and national identity.  While many of the featured works are referred to in the text, the catalogue simply provides details on size and ownership.  With paintings ranging from Julian Weir's 1897 Midday Rest, depicting ploughmen in a forest through John Henry Twachtman's 1895 Snow of a barn in winter, to Anna Lea Merritt's 1896 Piping Shepherd of a naked boy in a field of sheep, the  curators interpreted the idea of gardens extremely widely and it would have been interesting to know why such works were included.

Nonetheless, with its generous multidisciplinary approach to both themes and works, the book offers some stimulating insights into the role of late-19th-century gardens in America's national consciousness.