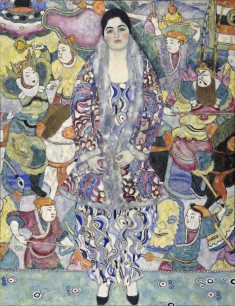 How did the son of a goldsmith become a portrait painter who bridged modernism and Art Nouveau? This 'magnificent publishing achievement' tells all

Gustav Klimt (1862–1918) was born the son of a goldsmith and gained an appreciation of valuable materials and meticulous craftsmanship from his family and his training in Vienna. He became one of the leading painters of decorative murals in public buildings but found himself gravitating to the darker, mysterious realms of Symbolism. He was one of the founders of the Viennese Secession, which aimed to break with Neoclassicism and historicist salonisme that had been Klimt’s foundation. The group became one of the main driving forces of Art Nouveau  and Symbolist art in the period 1895–1914.

When the Palais Stoclet – a grand villa on the outskirts of Brussels – was commissioned by a hugely rich industrialist in 1905, no expense was spared on design and construction by leading figures in the modernist Wiener Werkstätte. The fittings and furniture were designed bespoke for the house, as can be seen in the photographs included in this title. It has remained in the family and has been left unchanged and strictly private, making it a precious – and inaccessible – treasure of Art Nouveau. It is rare that even photographers are given access, so the photographs of the interior and Klimt’s daring murals (taken especially for this book) are particularly exciting. The mosaic murals that Klimt designed are in immaculate condition. By including preliminary studies and records of the finished murals one can see Klimt the craftsman working with specialists to realize his vision.

The cover of this giant tome illustrates a dancer made of a mosaic of marble, gold and semi-precious stones. The weight of this book makes it feel as if one is lifting a slab of marble and gold. Gustav Klimt: The Complete Paintings is a grand production in every way: the most comprehensive book on Klimt’s art, the most up-to-date information, the most profuse detail illustrations and the most carefully designed book on its topic. Its grand size matches the ambition of its publisher.

The reprinting of this lavish book once again makes available a publication that is both attractive and a serious piece of scholarship and analysis. Tobias G. Natter gives an overview of the art of Gustav Klimt. Scholars contribute specialist essays discussing different elements: early decorative painting cycles, Symbolist allegories, the mature mural projects, portraits of women, landscapes. The multi-part essay by Marian Bisanz-Prakken on different topics in Klimt’s drawings is fascinating. A very limited selection of Klimt’s 4,000 drawings indicates the artist’s ability as a draughtsman.

The inclusion of 179 postcards and letters written by Klimt gives us a view of Klimt both as a working artist and private man. The correspondence includes letters to some of his many lovers and gives a glimpse of Klimt as a father to a number of illegitimate children (he never married). Klimt’s ideas about art were complex, catholic and changing. Unfortunately for us, he was not given to writing about his own art. He travelled in connection with group exhibitions of Secession art but did not write anything revealing about the important figures he met, the art he saw or the books he read. Nevertheless, the translation of this correspondence into English is useful.

However, it is the illustrations which make this book such a pleasure. The quality of reproduction is very high, as is the printing. The subject essays are illustrated with extensive selections of large and full-page illustrations of the best of Klimt’s art. This is particularly striking with the landscapes, where we get close views of intricate designs. The landscapes are some of Klimt’s most significant achievements. In scenes of orchards, beech forest and lake views, Klimt habitually placed the horizon high and filled the picture surface with dense repetitive detail in relatively flat areas. Although there are buildings, there are no figures visible. The use of flat planes, shallow space, detailed passages and audacious compositions unifies in a way that is not apparent in the figure paintings. As a consequence the landscapes are some of his most effective pictures.

The catalogue section includes all 245 individual oil paintings and murals by Klimt. The Stoclet Murals (1905–11), so copiously illustrated in the main body of the book, are excluded from the catalogue section as they are mosaics not paintings. Destroyed or lost paintings are discussed. Each is illustrated if a photograph is available. The book includes – when available – colour photographs of the paintings destroyed in May 1945 by a fire at Immendorf Schloss, Austria. A number of important Klimt paintings had been stored there for safekeeping during the war and were burnt by retreating German troops in an act of apparently senseless nihilism.

There are limited exhibition and publication lists. Only academics will need more comprehensive data. A concordance lists items in this catalogue beside entries for the two previous catalogues raisonnés (published in 1967 and 2007, now both out of print and outdated).

Gustav Klimt: The Complete Paintings is a magnificent publishing achievement and allows the ordinary person to come as close to possible to actually owning a Klimt painting. With its large colour reproductions of details, one can get closer to the paintings than is possible in a museum. The details are often at life size or larger. The photographs of the mosaic tiles are so clear that one can imagine running hands across them. Numerous fold-outs present large murals in expansive form, allowing us to comprehend the overall design while being able to see details.

This opulent book is the perfect embodiment of the art of Klimt. This is a book he would have been proud of.